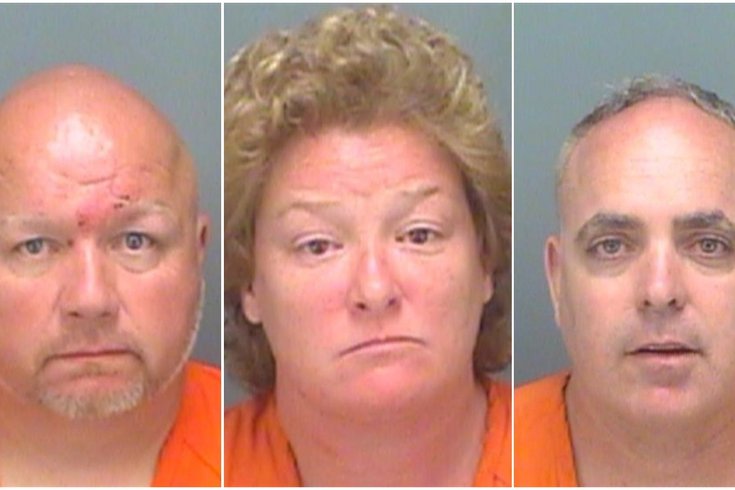 The incident occurred at 11 p.m. on Tuesday when police were called to seafood restaurant Crabby Bill's in Indian Rocks Beach near Clearwater on domestic battery complaints.

Police later identified a couple — off-duty Philadelphia police officer Cindy Caine, 44, and retired officer Paul Seeger, 55 — arguing outside the seafood restaurant. When police approached them, the couple allegedly walked away from the officers. One officer grabbed Seeger's arm to prevent him from fleeing the scene after "multiple warnings to stop," and Seeger resisted, according to police. Caine then allegedly forcefully pushed the officer's arm so Seeger could break free, police said.

Frank Bonett, 44, another off-duty Philly police cop, then approached the officer and allegedly "removed his shirt, clinched his fists, and shouted profanities at the deputy," police said.

The Florida officer deployed a taser at Seeger when he charged, however it was ineffective. An officer placed Seeger on the ground and he was taken into custody.

Pinellas County police believe alcohol was a factor in the incident.

In a statement to the Inquirer on Wednesday night, the PPD said: "We are aware of the arrests of two off-duty Philadelphia Police Officers in Pinellas County, FL. We are continuing to gather information about the incident from the Pinellas County Sheriff’s Office, and will release a statement in the near future.”

Caine and Seeger have reportedly been "uncooperative" with the investigation. They were taken to Pinellas County Jail as the investigation continues, and the Tampa Bay Times reports all three have since posted bail.