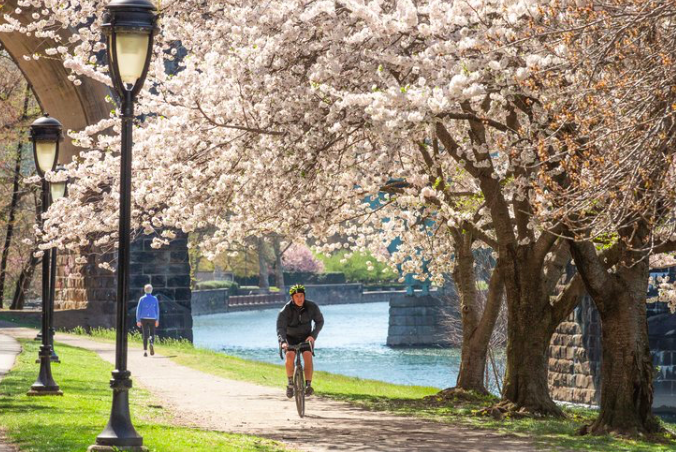 Cycling traffic has increased an average of 151% on Philadelphia trails during the coronavirus crisis, prompting the Bicycle Coalition of Greater Philadelphia to launch a petition that would close Martin Luther King Jr. Drive to motor vehicle traffic. The petition aims to create more space for cyclists and ensure proper social distancing. Above is a file photo of a cyclist riding near Kelly Drive.

Philadelphia cyclists are responding to the coronavirus pandemic in jaw-dropping numbers, hitting the Kelly Drive Trail by an increase of 471% since the beginning of March compared to the same period last year, the Bicycle Coalition of Greater Philadelphia said Friday.

With tightening restrictions throughout the city and large parts of the county, it seems many Philly residents are practicing social distancing on their bikes.

The Delaware Valley Regional Planning Planning Commission maintains automated counters on Circuit Trails around the region. While this year's mild winter played a role in the greater number of cyclists even before the arrival of COVID-19, it's clear that the current crisis has led to higher counts on the city's trails.

Data published by the Bicycle Coalition show dramatic increases on all of the city's most popular routes. 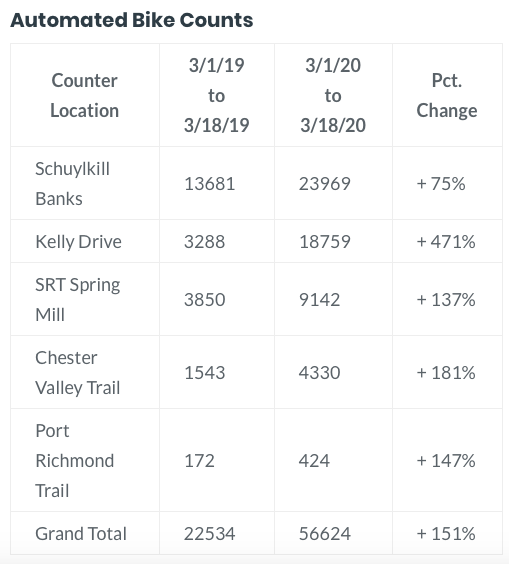 Source/Bicycle Coalition of Greater Philadelphia
"So far in March, counts are basically off the charts," the Bicycle Coalition said in a blog. "DVRPC data show a 471 percent increase in bicycling along Kelly Drive between 2019 and 2020 — which is unprecedented. All trails are way up, according to DVRPC and, on average, bicycling is up 151 percent, compared to the same period in 2019."


In response to the surge in cyclists, the Bicycle Coalition has launched a petition to close Martin Luther King Jr. Drive to better accommodate bike traffic and social distancing during the city's coronavirus restrictions.

"It’s not just people who have access to MLK Drive that need a safe, motor vehicle-free place to ride," the Bicycle Coalition said. "Gyms and fitness studios are closed; the city and state are asking people to not take public transportation. Biking is the best way to get around the city right now, and, for some people, the only way to get some real physical and mental exercise."

The MLK Drive closes seasonally on weekends beginning in April through the end of October to provide an accessible outlet for cyclists, joggers, pedestrians and other trail users. In light of this year's circumstances, the Bicycle Coalition hopes to shut it down fully to prevent overcrowding on other trails.

"Those trails are quickly becoming packed – in some cases, more packed than could be deemed medically responsible," the petition states. "Staying six feet apart from fellow trail users has proven increasingly difficult. Cyclists, runners, and pedestrians using the trails as of late have the same complaint: there just isn't enough room for everyone who is looking to get some exercise."

If the petition gains traction, the Bicycle Coalition said will urge the city to close other streets to motor vehicle traffic while the restrictions remain in effect.