The Eagles and city will split the bill 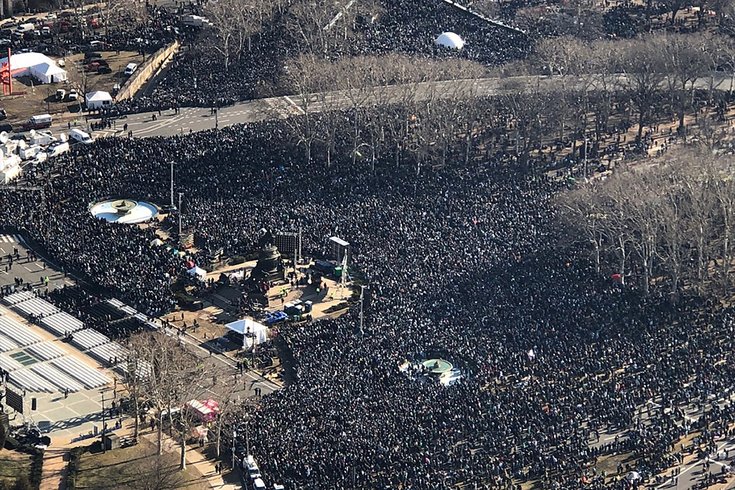 A police helicopter captured this aerial photo of the Eagles parade crowd on the Benjamin Franklin Parkway at about 1 p.m. Thursday.

Philadelphia treated the Eagles to one heckuva party on Thursday, but who is going to foot the bill?

And how much is the tab?

The city and Eagles will split the costs, Mayor Jim Kenney said at a press conference on Friday. But many of those details – like who pays what – are still being determined.

No arrangements were made before the parade, Kenney said.

"We have to figure out what the arrangements will be with them," Kenney said. "But we will be transparent with the numbers we have."

As of now, the total cost is still being tabulated.

The costs of the celebration itself – expenses like the military flyover, fireworks, Jumbotrons and confetti – likely will total between $2 million and $3 million, according to Fred Stein, one of the event producers.

That figure does not include any costs directly related to the city, like overtime for police officers, firefighters, EMS personnel and sanitation workers.

The city does not expect to have a total cost for at least another 10-14 days, Kenney said. Then city officials will meet with the Eagles to decide how the bill will be split.

"We need to do a full accounting of what was spent and what the costs were," Kenney said. "Then, we'll have that conversation. We can't accomplish that within one day of the parade."

Additionally, Kenney said the city has not estimated the economic impact of the Super Bowl victory and Thursday's parade. But he said he was sure restaurants and bars did well.

"I'm sure it was a positive impact," Kenney said. "But, psychically, you can't put a price tag on yesterday."

However, the Greater Philadelphia Hotel Association attempted to do just that.

Philadelphia hotels reaped $3.3 million in incremental hotel room revenue from Jan. 13 – the Eagles first playoff game – through the parade, according to the hotel association.

They booked 12,573 more hotel rooms than they did during the same stretch last year.