Damage to South Broad Street store estimated to be $4,000 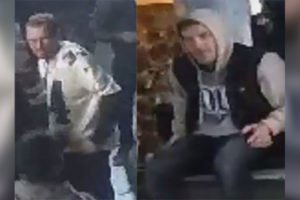 Philadelphia police are looking to identify these two men, who allegedly used a metal pole to break a window at A.C. Moore Arts and Craft during the Eagles' Super Bowl celebration.

Philadelphia police are looking to arrest two men who allegedly used a metal pole to break a window at the A.C. Moore Arts and Craft store in Center City following the Eagles' Super Bowl victory.

Tens of thousands of fans swarmed South Broad Street immediately after the Eagles captured their first Super Bowl win by upending the New England Patriots in thrilling fashion. Most fans celebrated peacefully, but some people engaged in vandalism, particularly as the celebration lasted into the wee hours of Monday morning.

RELATED: What you need to know about the Eagles' Super Bowl parade

Around 12:30 a.m. on Monday, police say two unknown men smashed a window of the A.C. Moore store at Broad and Chestnut streets. Damage to the window, located on the Chestnut Street side of the store, are estimated at $4,000.

The Fraternal Order of Police Lodge No. 5 is offering a $3,000 reward for information leading to the arrest of the people responsible for breaking the window.

The first suspect is a white male in his late 20s, with a heavy build and glasses, according to police. He was wearing dark sweatpants, tan boots and a white Eagles jersey – No. 34 with the name Turner on the back.

Video surveillance recovered by police shows the man removing his jersey, revealing a single tattoo on his upper right arm.

The second suspect is a white male in his mid 20s, with a medium build, according to police. He was wearing blue jeans, dark shoes and a black vest over a gray sweatshirt with blue and white letters.

Anyone with information is asked to contact the Central Detective Division at (215) 686-3093.