What you need to know about the Eagles' Super Bowl parade 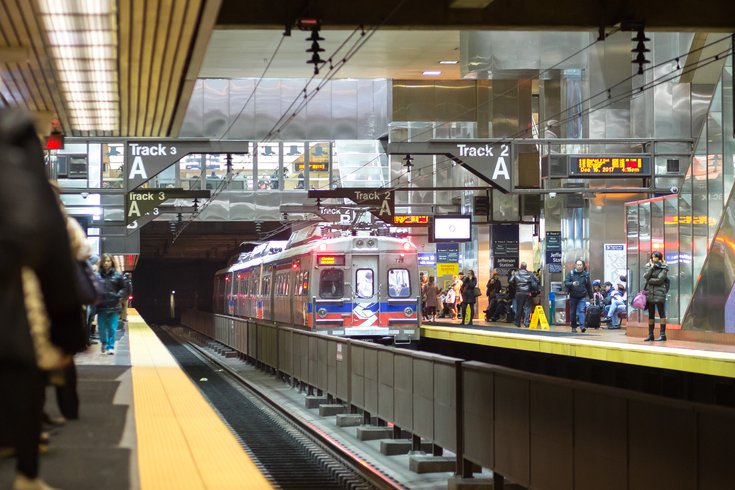 Well, the game is over, and out Philadelphia Eagles are Super Bowl champions.

And other than the years of bragging ahead about our team winning one of the most exciting football games of all time, there's that little matter of an official celebration.

Here's what we know right now about Thursday's parade to honor our Super Bowl champions:

The parade will begin at 11 a.m. Thursday and run till 3 p.m. A formal program is scheduled to start at 1 p.m. at the Art Museum. Video screens will be set up along the parade route so fans can watch the festivities.

Mostly sunny skies, with a high near 35, according to the National Weather Service. Wind chills will be significant lower – 23 to 25 degrees – thanks to a northwest wind between 10-15 miles per hour and gusts up to 20 mph.

SUBWAYS AND EL
Independence Blue Cross will provide free rides on the Broad Street subway and Market-Frankford lines all day, SEPTA announced. (Regular fares apply for all other SEPTA services.) The transit agency urges fans to take the subway and El into the city.

Trains on the Market-Frankford and Broad Street lines will run every 5-7 minutes starting at 5 a.m. on Thursday. SEPTA will utilize as many rail cars as possible to provide added capacity for riders. The following stations will be open, although additional closures are possible depending on crowds: 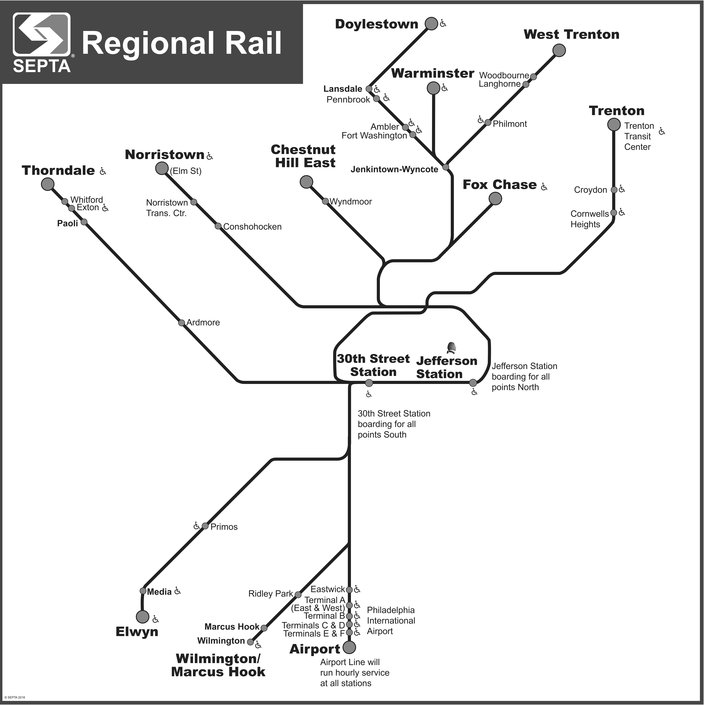 These stations will be open on Thursday on SEPTA's Regional Rail system.

Regional Rail service will operate Thursday – inbound only in the morning and outbound only in the afternoon – with only select stations only. For the return trip, customers must board at the same Center City station where they departed. Only pre-purchased passes and senior reduced fare will be accepted. A discounted Independence pass for $10 is available beginning today.

Regional Rail service will operate to-and-from selected stations. Service to Center City will be available via Jefferson and 30th Street Stations, which are a short walk from the parade route. There will be no service at Suburban, University City or Temple University stations. Below are the outlying stations that will be open on each line:

• Airport Line: Eastwick, Terminals A, B, C/D and E/F. Hourly service throughout the day.

For the return trip, customers must board at the same Center City station where they departed. For more information on fares and train travel times, please visit the Eagles Parade page on SEPTA’s website at http://www.septa.org/eagles.

For parade-day travel on Regional Rail, customers must have one of the following fare products: A weekly or monthly TrailPass, an Independence Pass, or a pre-purchased senior/reduced fare ticket. SEPTA is selling a special discounted Independence Pass for $10. The pass will be available at sales locations, and in limited numbers the day of the parade at open stations.

SEPTA urges customers to purchase passes before the day of the parade, and sales office hours will be extended through Wednesday.

A number of bus routes that operate on and around the parade route in South Philadelphia and Center City will be detoured. City Trolley Routes 10, 11, 13, 34 and 36 will not stop at 15th Street, and additional adjustments are possible. The Routes 101 and 102 Trolleys and the Norristown High Speed Line will stop at all stations, with service every 15 minutes.

CCT Paratransit will operate regular weekday service, although travel could be significantly impacted by rolling road closures and heavy pedestrian traffic. If possible, SEPTA encourages customers who are planning trips for medical care facilities near the parade route to schedule their appointments the day before the parade.

Real-time travel updates will be posted on SEPTA’s homepage and on Twitter @SEPTA_SOCIAL before, during and after the parade. Service alerts will also be sent to local news media outlets. Please note: Due to the parade-day service changes, information on SEPTA App may not be accurate.

SEPTA urges customers who are planning to use rail services to arrange to be dropped off at or near their station. Parking will be limited at SEPTA stations and surrounding locations, and available spots are expected to fill up quickly.

PATCO will run on a modified schedule on Thursday.

From 3:45 to 5:45 a.m. westbound and from 3:43 to 6:17 a.m. eastbound, trains will only service the Lindenwold, Woodcrest, Ferry Avenue, Broadway and 9th/10th and Locust Street stations. From 6 a.m. to about 1:50 p.m., PATCO will provide westbound only service, originating at the Lindenwold, Woodcrest, Ferry Avenue and Broadway stations. Trains departing from these stations will express directly to the 9th/10th and Locust Street Station. During this period, there will be no eastbound service.

Beginning at about 1:20 p.m. and continuing until 8 p.m., trains will transition to eastbound only service, originating at 9th/10th and Locust Street Station and stopping at Broadway, Ferry Avenue, Woodcrest and Lindenwold stations.

To safely accommodate as many passengers as possible, bicycles will not be permitted on trains during this period. As always, strollers are permitted, but passengers are asked to ensure that they are folded while on board the trains.

Regular fares apply for all customers age five and older; children four and under ride free. Tickets will be sold at all of the stations that will be providing service. Passengers who wish to buy tickets in advance are reminded to purchase their tickets at the station from which they intend to depart on Thursday.

For those wishing to walk into Center City, the Ben Franklin Bridge South Walkway will be open throughout the day and into the evening.

The perimeter of the parade will be firmly secured and protected for maximum public safety, the city said. Law enforcement will have a strong presence throughout the event.

Those attending the parade are encourage to make a plan regarding driving, public transit, parking, supervision of children and wearing comfortable attire.  Be prepared to walk, as road closures near the parade route will lead to traffic congestion and delays.

There will be no entry points with metal detectors. Fans are encouraged to leave no bag or item unattended. In an emergency or to report a suspicious person, activity or item (a backpack, a package, a container), notify a police officer immediately or call 9-1-1.  Do not try to open, move, cover or touch a suspicious item.

The Philadelphia Fire Department will staff medic (EMS) tents at the following locations:

Missing or lost persons should be taken to either medic tent listed above or notify a Philadelphia police officer immediately.

City personnel and Eagles officials will utilize a network of prevention and response services, which will be integrated, mobile and in constant communication. Alpha-numeric “location markers” are posted along the Benjamin Franklin Parkway to clearly and easily identify a location or section (by letter and number, example: CD-1) to facilitate communication in the event of an emergency.

Smoking is not permitted on any Parks & Recreation property including, but limited to, buildings, playgrounds, ice or skating rinks, fields or courts, pools, picnic areas, walking areas and parking lots.

Significant travel delays can be expected on the date of the event, and implementation of additional road closures and lane restrictions may be necessary during the event to maintain public safety.  Motorists are advised to avoid the area by using alternate routes, and allow for extra driving time when traveling in the vicinity.  Please refrain from double-parking, which creates congestion, limits traffic flow and is illegal.

Road closures on the parade route and in the immediate vicinity are scheduled to be implemented by 10 a.m. on Thursday and in effect until about 6 p.m. All roads are expected to be open for the morning rush hour on Friday. A detailed list of closures and restrictions by date is listed below:

The inner lanes (inbound and outbound) of Benjamin Franklin Parkway will be closed from Eakins Oval to 20th Street will be closed from 10 a.m. to 3 p.m. and from 6 to 10 p.m. on Tuesday and Wednesday. This closure will not be in effect during AM and PM rush hours, and cross streets will remain open to traffic throughout.

The following streets will be closed according to the schedules listed below:

The following streets will be designated “local access only” west of 22nd Street:

• All cross streets on Broad Street from Pattison Avenue to South Penn Square, from 13th Street to 15th Street

The inner lanes (inbound and outbound) of Benjamin Franklin Parkway will be closed from Eakins Oval to 20th Street will be closed from 6 p.m. Thursday into the overnight hours. Cross streets will remain open to traffic throughout, and all roads will be open prior to the morning rush hour on Friday.

Cross streets will be reopened south to north on Broad Street, and elsewhere along the parade route, as early as conditions allow on Thursday.

Temporary no parking restrictions along the parade route and on adjacent streets will commence at 6 p.m. on Wednesday. The full extent of these restrictions will be in place until about 6 p.m. Thursday.

• South Broad Street from South Penn Square to Pattison Avenue (both sides of the street, including the center median.)

• Benjamin Franklin Parkway from 20th Street to Eakins Oval (all lanes, both sides)

Please obey all "Temporary Parking Signs." Vehicles parked in these locations during posted hours will be relocated.

There will be no enforcement of meter and time limit regulations on Thursday, the day of the parade. Safety violations such as parking too close to the corner, fire hydrants, blocking crosswalks, etc. will be enforced.

The Impoundment Lot at 2501 Weccacoe Ave. in South Philadelphia will stay open until midnight on Wednesday for the release of vehicles. No vehicles will be released on Thursday.

Individuals with hearings scheduled on Thursday should contact the Bureau of Administrative Adjudication at 888-591-3636 to schedule a new hearing date. The unclaimed vehicle auction scheduled for Thursday on the 2500 block of South Swanson Street will be rescheduled.

During the parade, several bicycle lanes along Benjamin Franklin Parkway, Broad Street and streets in the vicinity will be inaccessible. Cyclists are advised to use caution when traveling in the area.

There will be no access to the Schuylkill River Trail from the rear of the Philadelphia Museum of Art on Thursday. Westbound travel on the Schuylkill trail will terminate at Paine Skate Park.

Due to transportation issues and the large number of attendees expected for the parade, all courts and Offices of the Philadelphia Courts will be closed Thursday. If you are scheduled for jury duty on Thursday, do NOT report for service. You will be rescheduled to serve at a later date. All critical court services are expected to remain operational.

GET IN THE HUDDLE

The Philadelphia Office of Emergency Management advises people can text READYEAGLES to 888-777 to get free text alerts from the city on #Eagles information regarding the parade, including transit and public safety updates. Please make sure READYEAGLES is one word and not auto-corrected.

GET YOUR (FREE) BUD LIGHT

Bud Light's buying – at least the first cold one – at more than two dozen bars along the parade route. It suggests fans use their "Eagle eye" to spot the participating taverns.

• Shake Shack to give away free custard during Eagles parade