Philly Preservation Alliance spearheads effort to 'save the saucer'

What will become of the Fairmount Park Visitor's Center? 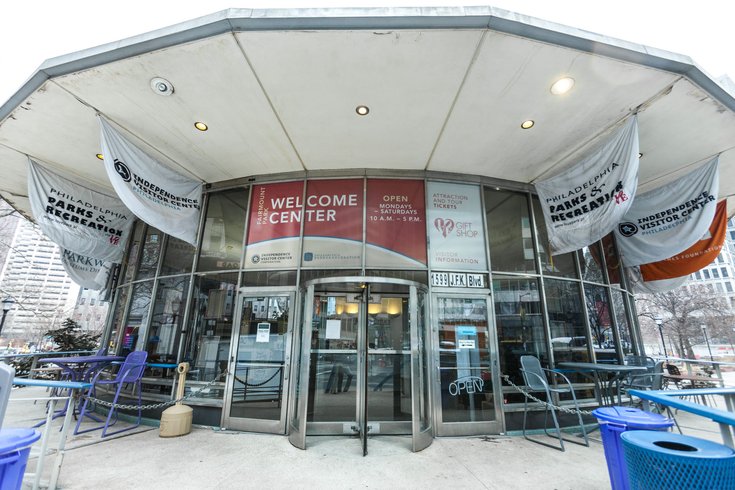 The Fairmount Park Welcome Center's fate remains a mystery as a New York-based firm finalizes the redesign of LOVE Park.

For five decades, an architectural marvel reminiscent of a UFO saucer has beckoned tourists and commuters alike in the heart of Philadelphia, all the while lingering at the bottom of City Hall like one of William Penn's lost frisbees.

Now, that frisbee is on the brink of being chucked into the garbage can by a development crew.
The Fairmount Park Visitor's Center has long served as a repository for visitor information, the go-to for brochures, maps and itineraries that usher tourists into the western half of the city. When LOVE Park redesign firm Hargreaves Associates (based in New York) announced its four top-contender plans in March, it did so with the inclusion of the structure in its mock-ups. But, perhaps visually misleading, that's not at all indicative of its actual fate: The structure, built in 1964, is on the chopping block for demolition.
Is it time to say goodbye to the saucer?

Say what you will about the structure and its all-at-once dated and futuristic design, but it is rooted in some serious history. Especially for architecture buffs.
The building was constructed as part of a larger plan by famed Philadelphia architect Paul Cret -- the namesake of nearby Cafe Cret, in case you've wondered -- who envisioned a more modest, civic-minded gateway to the Benjamin Franklin Parkway that would add diversity to the lineup of office building high-rises. Cret's legacy architecture firm, H2L2, designed the saucer itself as a look to the future -- a symbol of hope in a postwar society that was shoving the urban lifestyle to the side. The sleek, circular design was a sort of sass-back way of saying, We're not dead yet.
“From the perspective of preservation, the building is this rare example of a time in the city’s history when it was trying to modernize, and wildly communicate that, 'Yes, we’re losing population and industry, but we’re going to reinvent ourselves as this future-oriented -- Space Age, even -- kind of city," Patrick Grossi, director of advocacy for the Preservation Alliance of Greater Philadelphia, told PhillyVoice.com. "It would be unfortunate if we lost a significant icon of that period.” 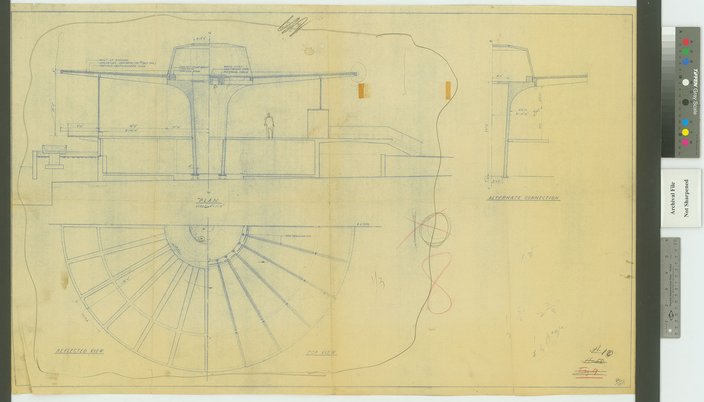 A schematic of what was then referred to as the "Philadelphia Hospitality Center," pencil-sketched by August Komendant of H2L2 on Nov. 9, 1959. "[The center's] circular form is meant to give orientation to the city -- a bridge to some of these tremendously large civic infrastructure and redevelopment projects across the 20th century," says University of Pennsylvania Architectural Curator and Collections Manager Bill Whitaker. Architectural Archives of the University of Pennsylvania / PhillyVoice

From a design standpoint, it's a piece of midcentury modern architecture.

"'Midcentury modern' is a term that's exactly what it sounds like: architecture designed and built in the ‘40s, '50s and ‘60s, that tends to have a sort of stylistic sleekness -- a time with windows and sin divisions and a very sleek, 'Jetsons' quality to the architecture," says Katherine Dowdell, an assistant professor of architecture at Drexel University. "There’s an architectural pedigree to this building that’s important. It's a classic example of what people were thinking about in ’62, and if someone asked, ‘How do you define midcentury modern?’ I’d show them this building." 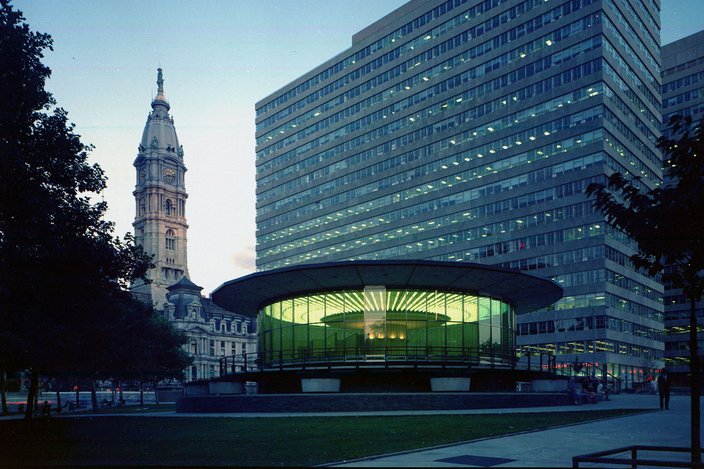 A photograph taken at dusk shortly after the building opened in 1964. Lawrence S. Williams Collection, Athenaeum of Philadelphia / PhillyVoice

Grossi, who's accumulated 268 petition signatures so far and launched a "#SavetheSaucer" social media campaign in tandem with Young Friends of the Preservation Alliance, says midcentury pieces are just now starting to enter the annals of discussion in the preservation world, making the fight to retain the saucer an especially significant and of-the-moment one.

“We’re in an interesting moment for a building like the saucer, because the preservation community has recently rallied around midcentury modern design," Grossi says. "[The saucer] would certainly be eligible [for historic places registry], if there was an effort toward designating it -- it would be a viable candidate. But I don’t know if that’s the play right now."

The play right now is merely to sway the city and design firm to repurpose the building -- a fight the Preservation Alliance appears to be alone in. The Fairmount Park Conservancy told PhillyVoice.com that, as of now, it supports Hargreaves' and the city's plans for redesign. Of note, however, is that the Preservation Alliance's fight isn't against the possible renovations (which are welcomed, in fact), but the demolition.

One concern Grossi offered about starting from scratch is that any replacement building may end up mimicking the saucer anyway, because of space limitations. In which case, the building just needs a makeover, after years of being poorly maintained and losing its signature translucence.

"I wouldn’t be surprised if the [new] building looked a bit like the saucer, with a lot of glass and light. It’s hard to appreciate [the saucer] now, because it’s covered in banners, and the glazing prevents you from seeing in the building, where there’s lots of beautiful tile," Rossi says. "It’s a matter of bringing this back to its former glory, and using the space in a valuable way – and a way that will bring in revenue, which is something they’re particularly sensitive to.”

The Fate of the Center

The official word is that the saucer may yet stay, but not without some significant changes.
The Philadelphia City Planning Commission told PhillyVoice.com that, regardless, the structure will need handicap accessibility and bathrooms if its programming takes on any kind of commercial makeover. Though, the space's most prominent piece of programming is expected to remain as is.

“Whether or not we renovate or replace it, the programming will be the same: a visitor-center function with info about amenities and attractions and some staff offices for maintenance and security," Mark Focht, first deputy commissioner for Philadelphia Parks and Recreation, told PhillyVoice.com. "What we’d be adding is public restrooms that would be accessible to the public, and a significant food and beverage operation. We’re talking to a number of operators that run food and beverage businesses, but we do want something beyond the food trucks – though, they will remain, just not in the current location."

Focht suggests that "food and beverage" operation will likely not be a coffee shop, as some have speculated. Because, frankly, there are plenty of other options in the vicinity for coffee -- including a Starbucks right across the street.

He also clarifies that the saucer shown in the plans (below) is meant to be a placeholder, confirming it's not any kind of indication that the saucer will stay, and that a possible new structure may not follow that circular blueprint. 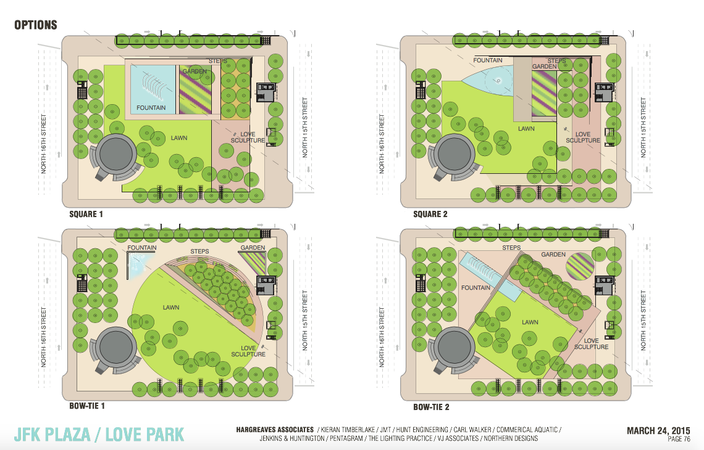 “A round building can be hard for any functioning, and we may find that renovation costs are expensive or exceed new construction, and those are all things we’re considering," Focht said. "Keeping [the saucer] would be environmentally sustainable, certainly, but there’s lots of other factors too."

What will unquestionably stay the same is the saucer's location: Because of how LOVE Park (created four years after the saucer) and surrounding development was thought-out in the 1960s (particularly, the subway concourse and underground parking), the southwest corner of the park is the only section that can safely hold a building. So, whatever happens, the location will likely be the same and comparable to the 4,854 square feet of space (counting both floors) the saucer currently boasts.

As for the preservation efforts, Focht merely said he's heard the arguments for preservation, and that it's "a factor we're considering."

In theory, circles -- saucers -- have no end. The shape just doesn't allow for it. But in the world of urban planning, designers don't play favorites with shapes.
In the end, will Philly's iconic saucer be saved? A shrug is just about the only answer -- for now, anyway.
Focht told PhillyVoice.com that the design firm is currently working on preparing a final plan for LOVE Park and the Fairmount Park Welcome Center that will be a "variation" of one of the four proposed plans. The announcement, he said, will come April 30.

Until then, enjoy gawking at that flying-saucer work of art while you can. Because all it will take is an eraser nub to a schematics sheet to forever wipe it from Philly's future.