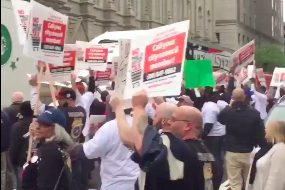 A large crowd of citizens, local businesses and elected officials rallied outside City Hall on Wednesday afternoon to protest Mayor Jim Kenney's proposed 3-cent-per-ounce tax on sugary beverages in Philadelphia, which has inspired a heated publicity war over a plan to fund universal pre-K, parks improvements and community schools.

Members of the Philadelphians Against the Grocery Tax coalition gathered to voice opposition to a "regressive" proposal they say will stifle local business, threaten jobs and place further strain on low-income communities. Mayor Kenney and city officials say the tax will improve public health and raise an additional $95 million in annual revenue for the city.

Several distribution trucks emblazoned with soda brands were led out by Teamsters Local 830 treasurer Daniel Grace, who criticized Mayor Kenney's portrayal of the corporate interests aligned against the tax.

Just so people stop correcting my earlier tweet about the horns. I know it's the soda tax. I saw this 5 secs later pic.twitter.com/ikbYqpc5qE

"The mayor uses the term Big Soda when he talks about why you are out here today fighting this tax. He can use that term all he wants, but when I look at this crowd I see working people with good jobs who want to support their families. There will be a lot fewer of you if this tax is approved,” Grace said.

Dany Vinas, owner of CTOWN Supermarket, said the tax will drive consumers to suburban markets in order to purchase affected products, including all beverages with added caloric sweeteners. Milk, 100-percent juice and zero-calorie drinks would be excluded from the tax.

“People won’t stop buying these drinks; they will just stop buying them in Philadelphia,” Vinas said. “That means potential revenues from the tax will be negated while also hurting local suppliers – like myself and my family.”

Scenes from the protest included both opponents and supporters, who took their message to Twitter in advance of a 5 p.m. public hearing at City Council on Kenney's FY 2016-2017 budget proposal.

Big Soda trucks circling City Hall, horns blaring. Now you know where the opposition to the soda tax is coming from. pic.twitter.com/EKXadmiJQb

.@MariaQSanchez sez @PHLCouncil can come up with "a more creative way" to pay for rec centers, pre-K, than soda tax. pic.twitter.com/yrI5u4fiL9

"I cannot take this vote because it goes against everything I have fought for creating neighborhood jobs! " pic.twitter.com/20qYHUhZwd

If you cannot follow the hearing live, video will be posted to our FY2017 YouTube Playlist: https://t.co/YUdUlJTyuO later this week.