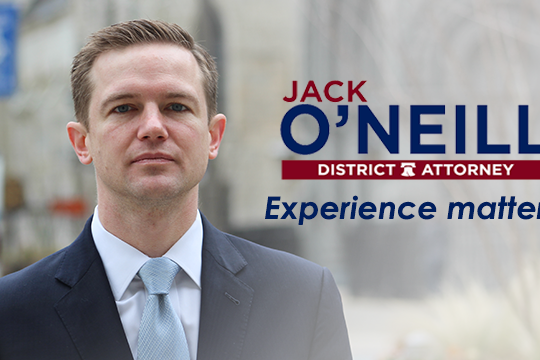 Philadelphia's most powerful union may make its pick for indicted Seth Williams' successor in part because of one candidate's Irish heritage, according to a report.

City&State's Ryan Briggs has the scoop that Local 98, the electricians union headed by its influential business manager Johnny "Doc" Dougherty, is leaning toward Jack O'Neill in the crowded Democratic primary for the city's next district attorney.

O'Neill, 35, was a prosecutor in Williams' office up until 2016. While Local 98 has been mum on any official preference among the seven Democratic candidates, sources say the union prefers O'Neill, Briggs reports.

Officially, Local 98 said its endorsement was still up in the air.

“Local 98 has not endorsed or decided upon a candidate in the DA's race at this point in time,” said spokesperson Frank Keel.

But sources, including individuals close to Local 98 and the O’Neill campaign, gave credence to the rumors of a possible alliance between the unions and the upstart candidate.

“It’s an Irish thing,” said a source close to the Democratic City Committee.

The "Irish thing" comment may sound like those weird, ultra-specific Facebook clothing ads, but race and political identity figure to be key factors in picking Philadelphia's next top prosecutor. As PhillyMag's Holly Otterbein recently wrote, Williams — the city's first black DA — campaigned as a progressive hero. But after some initial reform measures, he received criticism for taking a turn to be a more "tough on crime" prosecutor.

In the search among activists and political operatives to find a true progressive, local civil rights attorney Larry Krasner (who is white) has emerged. Known for sparring with police unions and representing protesters, he has gained the support of Asa Khalif, leader of the local Black Lives Matter chapter, and Michael Coard, an activist attorney who called Krasner the "blackest white DA candidate ever."

Meanwhile, the race's only black candidate, Tariq El-Shabazz, says he's getting unfair treatment specifically because he's black. El-Shabazz, Williams' former top deputy, told Philly in Focus that the media's focus on his tax debts is scrutiny the other non-black candidates in the race aren't getting.

On the opposite side of the spectrum, one candidate has already been lambasted because of his opponents linking him to President Donald Trump through the transitive property. You see, FOP Lodge 5 endorsed Trump, and they also endorsed Michael Negrin.

PhillyWeekly's Max Marin reported this gave his opponents an opportunity to pounce on the city's former managing director and bring up allegedly anti-progressive tendencies from his past, such as supporting stop-and-frisk policies and the arrests of peaceful protesters during Occupy Philly in 2011 under his watch.