Temps are not expected to return to 40s until Monday 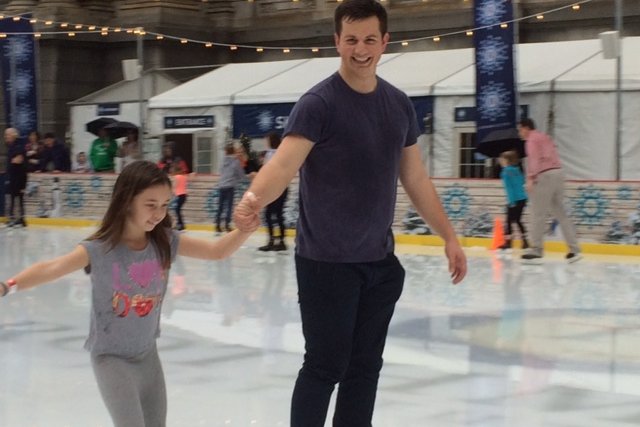 Cousins Paul and Rhyse Mahony ice skate at Dilworth Park in a light rain and wearing T-shirts on Christmas Eve 2015.

In Philly, we’re dreaming of a weird Christmas Eve, wearing T-shirts and shorts, that's wackily warm and rainy at the same time.

And this dream – or is a nightmare? – comes true.

Expect more of the same on Christmas Day. It won’t be seasonable until Monday when the daytime high finally dips into the 40s.

But the Mahony clan, with family from the Philly suburbs and Dublin, Ireland, were undeterred Thursday.

So the ice rink in front of City Hall, at Dilworth Park, thrilled him and his American cousin, Rhyse Mahony – despite that they were soaked.

And then he was off with his beaming cousin, her first time on skates.

Across the way at Love Park, Mayor Michael Nutter worked the Christmas crowd for one last time as the top elected official in Philadelphia.

Among those he greeted at the Christmas Village, while doing last minute shopping, were eight members of a Dutch family led by Gerjan Woldendorf.

Nutter didn’t buy anything while out talking.

But he wasn’t done shopping, he admitted.

“That’s what afternoons are for,” he said.