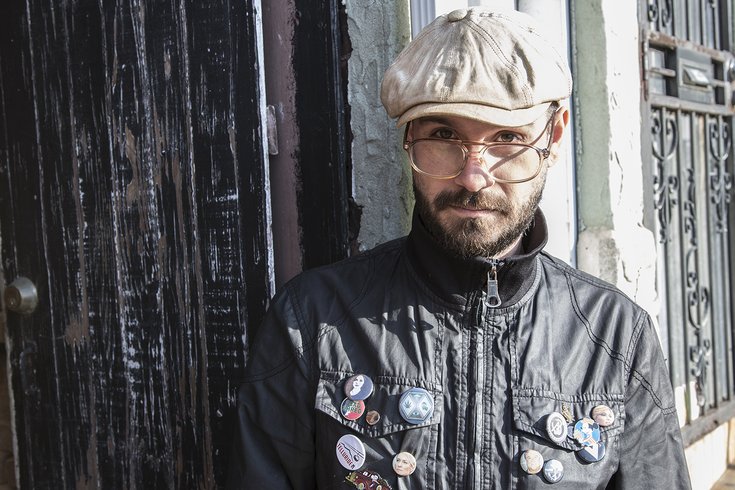 As the founding member of the five-piece Americana/psychedelic band American Babies (formed in between tours with his first band, Brothers Past), a member of Electron alongside Disco Biscuits founder Aron Magner, a member of Bill Kreutzmann's Billy & the Kids and a member of Grateful Dead tribute group Joe Russo's Almost Dead, the busy West Philly-bred musician, who's heading out on tour in support of a new album, certainly makes never repeating himself look easy.

But he'll also be the first one to tell you it's not.

Hamilton and his crew are out on the road now through Saturday, March 19 when the band returns home to Ardmore Music Hall for the release of "An Epic Battle Between Light and Dark." He began working on the new album, the band's first since 2013's "Knives and Teeth," in earnest about a year ago. But before that, he and composer Peter Tramo retooled Lorelei Studio in Callowhill to create an ideal environment for finding yet another new sound.

"I mean I’m in my 30s so I’ve been doing this awhile and for me personally, making a record, I don’t like repeating myself. So I make a record and it’s about chicks or a sh**** relationship or something, I’m only really going to give myself that one time to do it, you know?" Hamilton told PhillyVoice in an expletive-laden chat. (Faint-of-heart: this is your only warning.)

"This is my fourth album, so I really had to start digging pretty deep as far as talking about sh** I haven’t spoken about before and sounds that I haven’t necessarily achieved before."

To make that deep dive, Hamilton and Tramo sat down and began talking, talking and talking about anything and everything -- what the album could or should be about, what Hamilton's discussed on previous albums, what he's thinking about now. Rather than piecing together different songs and ideas or creating a strict concept album, the themes of "Light and Dark" revealed themselves through conversation.

"We threw a bunch of sh** at the wall, just idea wise and started to peel away from it. Kind of like when you’re making a statue and you have one big rock, you’re not creating art, you’re taking away art," Hamilton said. "You’re taking away the rock to reveal what’s going on."

And what was going on in Hamilton's life was the end of a relationship with someone who suffered from mental health issues. This experience, coupled with Hamilton and Tramo's own experiences with depression and anxiety, got them talking. Then, the suicide of Robin Williams, a comedy legend who kept his inner struggles well-hidden, brought home just how many people struggle with mental health in their own lives and the lives of their loved ones.

"That was rough for me to deal with. ... I always felt the way he approached comedy was the same way that I approach music and improvising and that in-the-moment thing. I’m a big fan of, in a live show, never trying to just make the songs sound the same way it did on the record. I enjoy the newness of playing music live and letting songs have their own identities in the moment," Hamilton said.

"That’s how Williams worked as far as each scene shot was a unique opportunity and he gave something different every time. It was one of those things where God, if this guy can’t stomach it, get through the rest of it, what chance do the rest of us have? That made it well, wow, maybe this is something we should be talking about and that’s kind of where the record was born from."

But Hamilton is quick to note the album's no downer -- and its first single, "Synth Driver," a soaring eight-minute guitar-fueled epic, makes that clear. Rather, the message of "Light and Dark" is that everyone is going through something; you just have to make it through.

"I feel like everybody hopes that somebody listens to their record the way that we listen to records, like that when life is kicking your a** up and down the street, and you need to retreat or regroup, that you grab that copy of 'Revolver' or you grab whatever record it is for you and it makes you feel safe, it makes you feel better and it makes you say, ok, this is just a moment," he said.

The list of influencers that bring Hamilton solace and inspiration is (perhaps, predictably) as varied as his resume. From Williams and the Grateful Dead (alumni of which he's joined on stage many times) to David Bowie and Alice in Chains, Hamilton likes those who never repeat themselves. It only makes sense, then, that he finds imitation the least sincere form of flattery.

He is, after all, cut from the same cloth that birthed a stream of Philly-based bands that also don't give a you-know-what. He counts Dr. Dog, Strand of Oaks, Kurt Vile and The War on Drugs among his hard-working contemporaries.

"There is this work ethic involved, this blue collar-ness [in Philly] – I call it the 'Rocky syndrome,' that is just ingrained in us, man, not because we want it, I don’t think. It’s a weird burden to carry, I feel, but you look at those bands and I know first hand the amount of work those guys put into and continue to put into what they do," he said. "There’s not one single ounce of entitlement or deserved success."

This, coming from a multitasker like Hamilton, is high praise.

As he and the rest of American Babies head to Florida, Illinois, New York and Connecticut on their way back to Philly in March, they're still bringing songs from "An Epic Battle of Light and Dark" into their set before its March 18 release.

"You learn something and then you learn it until you can do it backwards and then the next step is to forget it so you can break it apart and do it in different ways," he said, "So we’re still at the learning it phase right now. ... But that’s one of the things I love the most."