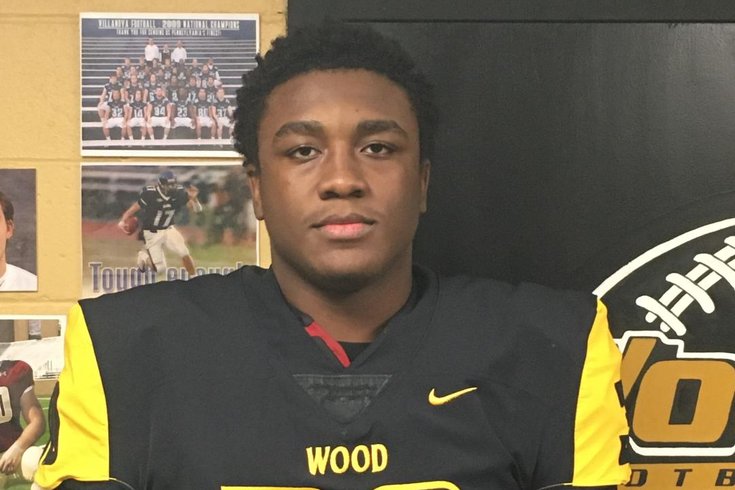 Robert Jackson is somewhat tough to miss. He stands 6-foot-6, and weighs 250 pounds, and for years, he was constantly asked why he didn’t play football. This fall, the Archbishop Wood junior gave in.

The starting center for the Vikings’ basketball team, Jackson decided to play football this season for the very first time. A 6-6 center in basketball may not garner the attention of Notre Dame, Alabama, LSU or Penn State, but those schools would certainly pay a wealth of attention to an athletic 6-6 defensive end with a 7-foot-2 wingspan.

A few months ago, Jackson was learning how to put on football equipment. Now, he’s become a game-changer, blocking kicks and extra-point attempts, like he did last week in Wood’s 21-20 overtime upset over a very good La Salle team.

The victory may have saved Wood’s season. It definitely placed the Vikings back in the PIAA District 12 5A picture.

As for this diamond-in-the-rough, Jackson admits he didn’t confuse a jock strap for a thigh pad, though he had some initial trouble getting his jersey over his shoulder pads. The present problem is how opposing teams will deal with him.

He has to add some more weight to his lithe frame, and he’s still learning on the job.

But each week, he’s been improving. That will cause attention to come his way on the field and off of it.

“I can see football in my future,” said Jackson, who carries a 3.0 GPA at Wood. “I’d actually like to do both in college. The biggest obstacle is learning technique. Oh, I hear ‘outside contain’ in my sleep [laughs]. I like it. I like going after the other team.

“I do see the opportunity I have in football. I honestly want to get better and how I’m going with it. I feel I have a better opportunity (to go to a major school) in football than for basketball. And I will be a tight end soon. I love football. I get to hit people without a foul being called.”

Kyle Adkins, Wood’s football coach, has a good relationship with Wood basketball coach John Mosco. They spoke about other possibilities for Jackson.

“You can’t teach 6-6, with a 7-2 wingspan,” Adkins said. “Robert is good, and he’s just learning how to play football. That’s the exciting part, and he’s getting better. Coach Mosco played a part in encouraging Robert to try football, and I think that helped in Robert’s decision.

“I know Robert thought about playing football before. Robert has such a willingness to learn and he’s always trying to get better. He’s been an absolute delight to be around. I played here at Wood with some major players, and Robert could be as they were, and they were major FBS recruits.

“To me, it’s a matter of Robert putting film together.”

This is for the West Jersey Football League American Division title. Both teams are 3-0 in the league. Williamstown has proven to be the best team in South Jersey this season. Shawnee has homefield advantage, Williamstown has everything else. The Braves have four shutouts this season and in seven games have outscored their opponents, 231-35. Williamstown averages 33 points a game as opposed to giving just 5 points a game.

Coatesville is going for its fourth-straight Ches-Mont League National Division title. The Red Raiders are also going for their third-straight PIAA District 1 6A championship, and a healthy Ricky Ortega makes it possible. The Villanova-bound senior quarterback, who’s been slowed by an ankle injury this season, exploded for 325 yards passing and four TDs, two running, two passing, in Coatesville’s 29-21 victory over previously undefeated Downingtown West last Friday. Downingtown East got into a shootout with Downingtown West earlier this season and lost, 63-35.