NFL trade rumors: Could the Eagles trade Nelson Agholor to the Colts?

Plus, what might it cost to land Chris Harris Jr.? And could Big V be on his way out of Philly? 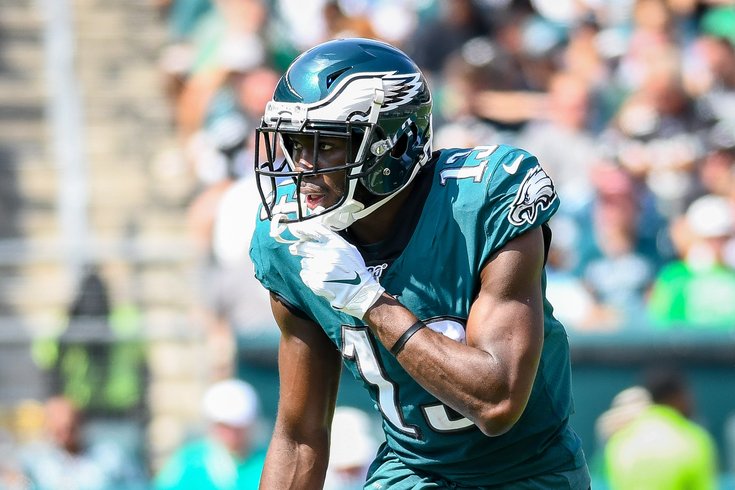 A few weeks ago, following back-to-back wins to move to 3-2 on the season, everyone thought the Eagles would be buyers at the deadline. Now, after two embarrassing losses on the road and another tough test on Sunday in Buffalo, the Birds are beginning to look more and more like they could be sellers — or at least non-buyers.

We know they were in on Jalen Ramsey, but weren't reportedly willing to pay the price the Rams were for the All-Pro cornerback. They've also been linked to Broncos cornerback Chris Harris Jr., but there's been little movement on that front so far this week.

Now, much like the Phillies at the MLB trade deadline, the Eagles might be hesitant to be buyers and potentially hurt themselves in the future in order to try to compete in a season when they just might not be built to win. However, the Eagles could do a 180 from a couple weeks ago, and actually wind up doing a bit of selling ahead of the deadline. And one player on the move could potentially be wide receiver Nelson Agholor.

We've already noted that the Eagles receivers have been quite unspectacular this season, and perhaps a shakeup is in store, especially with DeSean Jackson expected back on the field before too long. Agholor has had his fair share of struggles in Philly, and his effort came into question on Sunday night after this play against the Cowboys.

Coaches Film on the infamous Agholor play...it was an easier catch to make than we thought!!! 🤬🤬🤬 pic.twitter.com/prViQQu28M

Agholor's teammates came rushing to his defense, but the fanbase was unrelenting in their anger, calling for the Eagles to cut the wideout. While that doesn't look like it will be happening, NFL.com's Marc Sessler believes the Colts could be a fit for Agholor.

INDIANAPOLIS COLTS: Buy wide receiver Nelson Agholor. The Eagles loom as buyers on defense, especially in the secondary, but it wouldn't be a shock to see them part ways with Agholor. With one game all year of 60-plus receiving yards, Agholor has struggled to mesh inside an out-of-sync Philly offense. Indy would welcome the former first-rounder as needed help alongside T.Y. Hilton. With Zach Pascal, Parris Campbell and Chester Rogers behind the star pass-catcher, signal-caller Jacoby Brissett could use some veteran help. Potential compensation: 2020 fourth-round pick.  [nfl.com]

It's worth noting that Sessler isn't reporting anything here, just pointing out a potential trade that makes sense. Given Agholor's connection to Colts coach Frank Reich — Agholor had his best season as a pro under Reich in 2017 — there seems to be something to this. The Colts are playing better than expected, and don't have much depth at wideout, so Agholor would definitely make sense.

As for it's impact on the Eagles offense, Agholor hasn't provided much to Carson Wentz and Co. this season, and when thinking about his plays from 2019 that stick out the most, there's no question it's the drops. Add to that his status as a free agent following this year, and it's beginning to look like the end for Agholor is near, one way or the other.

Just because the Eagles sell on offense doesn't mean they won't be buyers on defense. After all, they're still very much in the hunt for the NFC East, and getting rid of Agholor wouldn't likely change that. But standing pat defensively at the deadline would almost certainly rule them out of contention — unless, of course, Jim Schwartz finds a way to teach his secondary to cover wide receivers over night.

And that brings us back to Harris Jr., who has been linked to the Eagles for weeks now, even during the Ramsey sweepstakes. Coincidentally, Harris is just the guy Sessler sees the Eagles targeting at the deadline. But it's going to cost them.

PHILADELPHIA EAGLES: Buy cornerback Chris Harris Jr. How does Howie Roseman attack this trade deadline? With an air-tight but underperforming and injury-prone roster, the Eagles don't need much to sneak into the postseason except minor improvements and more consistent play on the outside. Enter the Broncos, who've made it known that Harris, a 30-something cornerback in the last year of his renegotiated deal, is available and garnering interest. A swash-buckling Roseman should take a Philadelphia flier on Harris, but the Eagles GM might have to give up a young cornerback in the process. Potential compensation: Ronald Darby and 2020 conditional fifth-round pick.  [nfl.com]

On Wednesday, Charles Robinson of Yahoo! Sports reported that the Browns were looking to bolster their offensive line to better protect Baker Mayfield. And one of the names he mentioned — after Washington's Trent Williams and Nate Solder of the Giants — should be of interest to Eagles fans.

Option No. 3 for Dorsey would be more of a bargain move for depth and flexibility — targeting one of the Eagles’ offensive tackles. Specifically backup Halapoulivaati Vaitai, who has starting experience at tackle and also the flexibility to play guard if needed. Vaitai is in the last year of his rookie deal and has been the odd man out in an offensive tackle quartet that includes top-end starters Jason Peters and Lane Johnson, as well as rookie Andre Dillard.  [yahoo.com]

Vaitai hasn't been great in his time with the Eagles, but he's been a serviceable backup, something the Eagles have needed given the age and injury history of some of their offensive lineman. But he's never been able to solidify himself as a starter, and as Robinson mentioned, his ability to move from tackle to guard should intrigue any potential trade partners.

The NFL trade deadline is on Tuesday, so be sure to stay tuned for all the latest as the Eagles decide whether they want to be buyers, sellers or both this time around.