Airport workers rally ahead of DNC strike planned for next week

Union plans 'as much disruption as possible' during the upcoming Democratic National Convention. 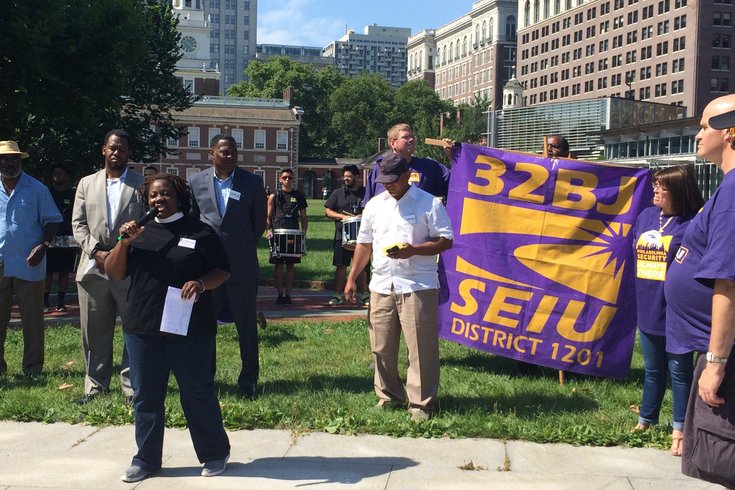 With delegates to the Democratic National Convention set to descend on the City of Brotherly Love next week, members of the airport workers union rallied Tuesday, calling for higher wages in light of a $30 million expansion project at Philadelphia International Airport.

Before a planned protest at the airport, members of SEIU 32BJ, a union that represents baggage handlers, wheelchair attendants, janitors and security officers, gathered at Independence Mall for a solidarity rally calling for higher wages.

The crowd chanted "If we don't get it, shut it down" as they demanded a wage of $15 an hour.

Airport workers are fed up! #blacklivesmatter at work too! @AmericanAir @PHLAirport do better. #povertydoesntfly pic.twitter.com/iTkhyT3r5u

On Tuesday, workers and supporters reiterated their intention to strike next week, promising to cause "as much disruption as possible." The union has authorized – by an overwhelming vote of 95 percent – a strike during the convention in Philadelphia.

Cruz, however, would not discuss when the strike would be called and other details.

"It depends, we will have to see how everything goes," she said.

In calling for better work scheduling and higher wages, the Rev. Naomi Leapheart of Power Metro, an interfaith group trying to "bring about justice here and now," called the Philadelphia International Airport a "repackaged plantation."

She said that because workers at the airport "don't even make enough to afford a plane ticket," they are subjected to a new form of plantation life.

"Enough is enough. It's time to dismantle this plantation," said Leapheart.

Before 11 a.m., the workers boarded buses headed to the airport to continue their rally.

According to Cruz, workers at the airport will continue to protest calling for higher wages.