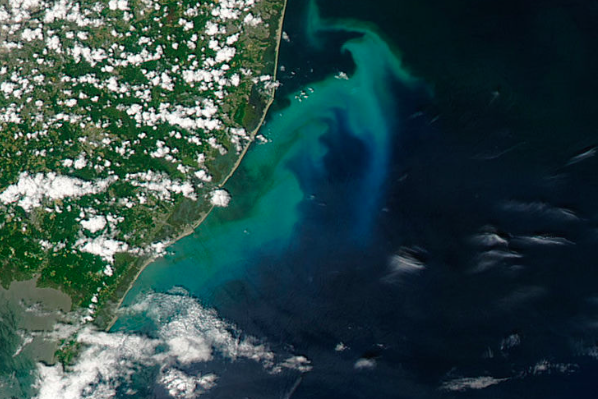 Aerial view off the coast of New Jersey taken from the Moderate Resolution Imaging Spectroradiometer (MODIS) on NASA’s Aqua satellite on July 6, 2016.

Residents and visitors along the beaches of the Jersey Shore have been pleasantly surprised by a tropical tinge that spread across the coastal Atlantic Ocean in recent weeks. The cause, marine scientists say, is a sudden bloom of phytoplankton brought in by a drought-like reduction in river flows throughout the region.

The aquamarine hue is visible from Long Beach Island to Cape May, where the normally murky grey shade of the ocean surface has been infused with chlorophyll from phytoplankton, the Press of Atlantic City reports. Combined with a dearth of river water, the phytoplankton is reflecting turquoise wavelengths under the summer sunlight.

Atlantic City Cruises owner Jeff George says the arrival of aquamarine water has been a boon for travelers who likely didn't expect to find a Caribbean atmosphere at the Jersey Shore. The clarity of the water has also made spotting dolphins much easier.

“I’ve been on the water my whole life, and I can’t remember water this clear and this green for this amount of time,” George said.

Casual observers wouldn't immediately be able to discern that phytoplankton is behind the sudden sea change. The microscopic plants tend to multiply most when cooler waters filled with nutrients upwell to the ocean surface. Billions have likely emerged off New Jersey due to meteorological conditions in the Northeast.

While drought conditions may change or influence the appearance of the water, experts say wind patterns will be the biggest factor in determining how long the water will remain turquoise. In the meantime, there's no harm imagining that you're in the Bahamas.