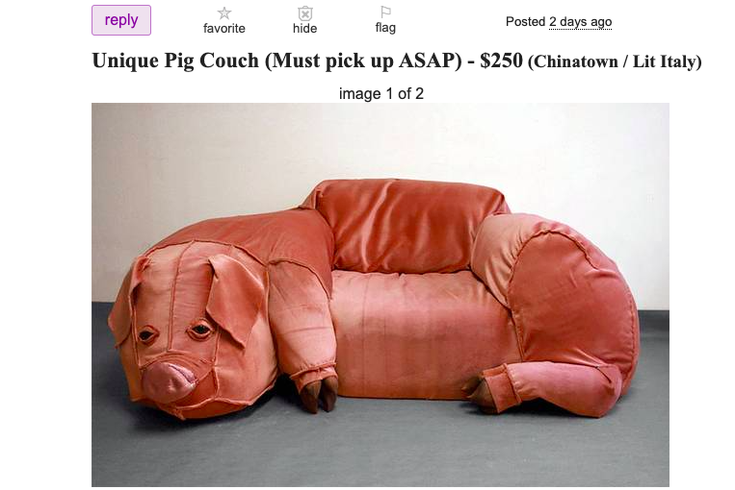 A Philadelphia-based artist is behind the Craigslist "pig couch" seemingly for sale in Manhattan, NY that widely circulated online recently, and was the topic of much speculation.

The listing proved even more confusing once one read the item's description, which claimed the Manhattan-based seller bought it for $11,000 but was now selling it for the low price of $250 because the lister's "new boyfriend hates it," according to the post.

"Got this pig shaped couch a few years ago. It was designed by artist Pavia Burroughs and is a really insane/cool addition to any home especially if you love pigs but even if you just like animals. Also very comfy!!! Selling it for $250 even though my boyfriend and I bought it for over 11k and it’s in pristine condition. Need someone to pick it up ASAP as my new boyfriend hates it and sadly this is non-negotiable for him," the full description read.

Unfortunately for many excited Twitter users, the pig couch is sadly not for sale, and a part of a reoccurring Craigslist scam where pranksters post photos of the unique furniture item – which is very real, by the way.

Pavia Burroughs, the artist mentioned in the listing, is indeed the real creator of the couch. She is also a South Philly native who works for Shane Confectionery – which claims the be the oldest candy store in the U.S. – and created the couch while a student at University of the Arts in Center City.

The now 31-year-old artist said she wasn't surprised when the listing re-surfaced online, because the Craigslist scam had been happening for years.

"The couch is owned by the Internet now. I just think it’s funny. I do hope it’s still alive, and that it’s bringing someone joy somewhere outside of a joy of trolling on the internet," Burroughs told the Inquirer.

Burroughs also said that the $11,000 asking price in the fake Craigslist ad was also way off. She attempted to sell it for $950 but ending up finding a buyer for around $500.

The pig couch sold years ago, shortly after the then 22-year-old artist completed the piece of furniture as a the project for her senior thesis. As far as Burroughs knows, the owner is not looking to sell it right now.

Martin Roesch, the real owner, is well-known in his own right for being somewhat of a Silicon Valley celebrity. Roesch founded the cybersecurity company Sourcefire, which was later acquired by Cisco Systems, a large, multinational, technology conglomerate.

Roesch bought the pig couch to use for his Sourcefire offices in Maryland, where it reportedly still resides. The pig seating was on-theme with the company's original internet security software program named "Snort."

The exec even joined in on the fun this week, when he realized the cute couch was getting new attention.

Oh hey, I hear the internet is interested in my couch? pic.twitter.com/cmZlvpEJss