The magazine praises the Thai restaurant, writing: 'Drive a thousand miles if you have to. Just go' 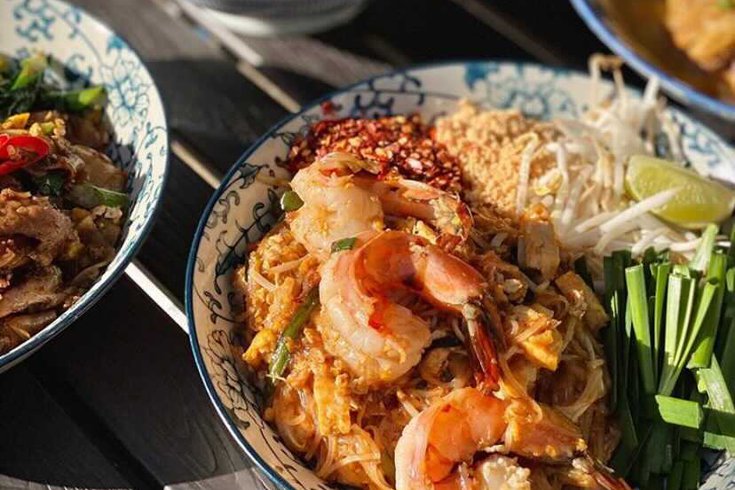 Esquire picks Philadelphia's Kalaya from Chef Chutatip 'Nok' Suntaranon as the best new restaurant in America for its 2020 list. The Southern Thai restaurant also garnered praise and recognition from other publications this year.

It's odd to see a Best New Restaurants in America list for 2020, as many restaurants have been struggling and continue to struggle through an incredibly difficult time due to COVID-19 and changing restrictions.

It seems like we should cheer on any restaurant that's been able to survive a global pandemic, not just focusing on which ones are "the best." But on the other hand, the hard work and creativity that these restaurants have put in to be outstanding does deserve recognition.

Esquire published its list of 23 Best New Restaurants in America on Tuesday and addressed the topic of why they chose to hand out awards, calling it "an expression of support—love, really."

The article goes on to state:

We spent these months looking for the people and places that restored us. If there’s a unifying theme, something that all of our picks have in common, it would be the stubborn survival of community in the face of what can only be called an existential threat. It’s an understatement to say that 2020 was different. But if we learned one thing this year, while trapped at home for weeks with tins of tuna and bags of dried beans, slowly being driven nuts by the monotonous, Groundhog Day–like grind, it’s this: We need restaurants more than ever.

At the top of Esquire's list, coming in at No. 1, is a Southern Thai restaurant in Philadelphia that's also garnered praise and recognition from other publications this year.

Kalaya, from Chef Chutatip "Nok" Suntaranon, opened in the spring of 2019 at 764 S. Ninth St. and quickly became a local favorite.

"Kalaya is the restaurant that every food writer—hell, every food lover—dreams of walking into someday," reads Esquire's review. "Even in a city with arguably the most exciting food scene in the United States, Kalaya leaves the competition in the dust. Drive a thousand miles if you have to. Just go."

Thankfully for those of us in Philly, we don't have to travel far for the restaurant's praised tapioca dumplings. We can stop by for dinner, place takeout orders online and as of recently, we can even get Kalaya's delicious dishes delivered to our door through Uber Eats.

On Instagram, Kalaya posted about the recognition from Esquire, writing: "2020 is surely not an easy year but for us at Kalaya we kept pushing and grinding it each and every day."

The post also thanks the staff and customers, before closing with "WE LOVE YOU PHILLY."

The same article also named Philadelphia-based chef Omar Tate of Honeysuckle as Chef of the Year. Tate is currently trying to turn his pop-up concept into a community center in West Philly through GoFundMe.

"He's an artist at heart who just happens to express himself through the medium of cooking. Itinerant and unsinkable, improvisatory and bold, Tate captured the radical shifts of 2020 with everything he undertook," states Esquire.

Honeysuckle began as a New York-based dinner series, but then became a takeout and pop-up series. It examines Black culture and history through a culinary lens.

"Tate created his pop-up, Honeysuckle, as a 'portal of Blackness,' an ode that he conveys through delicious, history-drenched dishes – from a glass of handmade Kool-Aid to a perfectly roasted and seasoned slab of sweet potato," writes Esquire.

Tate also took to Honeysuckle's Instagram to comment on his recognition by the magazine, writing: "Wow, 2020 has been one thing after another – good, bad, or confusing. This honor, 17 years in the making, is one that supersedes all into joy."

He gave a shoutout to Kalaya and his family, as well, before ending the post with "hard work pays off."