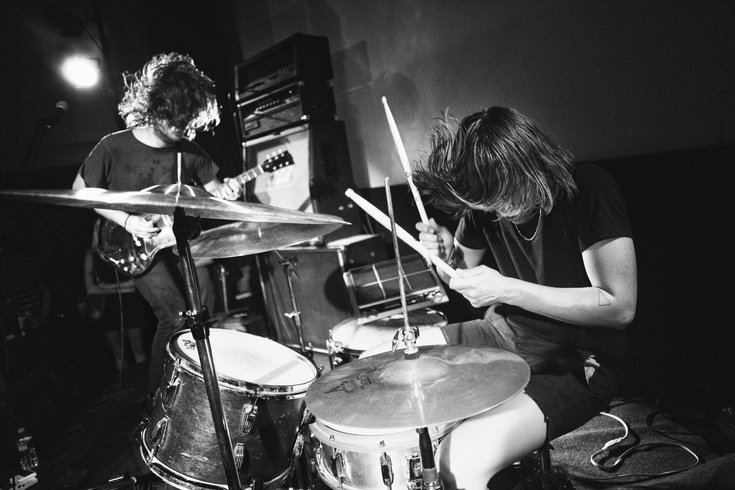 The two have been making music together for many years, but Pinkwash is a recent invention, an outgrowth of their previous coupling as Ingrid, a Washington, D.C.-based band that “was pretty much focused on just having fun,” Doubek admits.

“We didn’t really play outside of D.C. very many times,” he says. Ingrid played some passionate hometown shows, released a cassette and called it a day. “Ashley was moving [to Philadelphia] and we sort of just dwindled out because we just got too busy.”
Pinkwash is more than just a reunion, though, it’s a coping mechanism, an outlet for Doubek to lay bare the struggles of losing his mother to breast cancer in 2009 after acting as her primary caretaker. Unlike the cold, corporate cause marketing that their band name evokes — pinkwashing is the LGBT variation of whitewashing — Pinkwash’s bold music is also intimate and vulnerable, dealing with death and dying, grief and bitterness.

Both musicians have had other outlets elsewhere — Arnwine was in Bleeding Rainbow, and is the touring drummer for Waxahatchee, Doubek played with another D.C. band, Hume, for years — but Pinkwash was deliberate to the point of Doubek moving house. “I realized that I just really wanted to be playing music with Ashley again so I moved to Philly,” he says.

In 2014, the duo released a cassette EP called “Your Cure Your Soil“ with song titles like “So Long” and “Ideal Death.” Doubek agonized about the literal pain of his bedridden mother on a track called “Mattress.” For “Cancer Money,” a single the duo released last year, he recorded the terrifying sound of his mother’s hospice breathing machine and injected it into the song.

Pinkwash’s debut album, “Collective Sigh,” which releases this Friday on the New Jersey-based label Don Giovanni, delves further into Doubek’s grief. He references the band’s earlier songs as “angry pieces of music” whereas the song “Collective Sigh” is “a little more about coping with the process.” The title itself seems to hint at the awkward potential for relief after suffering.

“It’s kind of this overarching grief cycle,” he says Pinkwash’s music. “Long after [a] loss it becomes this point of extreme bitterness and anger and resentment. … The cycle sort of continues now where this new record is more so about trying to just cope with things.” The songs are still tormentingly specific to his mother’s cancer: “Metastatic” confronts the spread of the disease; on “Burning Too” Doubek deals with the aftermath, singing, “I’ve burned all your bedsheets.”

“I would say that we’re both kind of quiet or guarded about our emotions in day-to-day life but we’re very emotional musicians."

Both Doubek and Arnwine revel in frenetically technical instrumentation, and after playing together for years, they’re admirably in-step on record. “We play in a very similar way,” Doubek says. “I would say that we’re both kind of quiet or guarded about our emotions in day-to-day life but we’re very emotional musicians. It’s kind of like this thing that we love doing together and feels really good.”

The duo kicks off a short tour in support of the album on Friday, and while “Collective Sigh” seems like an emotionally cathartic time capsule, both players transcend the recordings during live performances. “We are a very loud band, that is definitely true,” Doubek says with a laugh. “We both pretty much exhaust ourselves whenever we play… You get your exercise, you get your heart rate up. That’s something that I should be doing every day anyway.”

Arnwine, who has worked in carpentry as a furniture maker and had a brief stint making audio equipment with a friend, agrees, but also shares her excitement for a more mundane aspect of touring: “I love the process of setting up the equipment and taking it down,” she says. “We’ve spent a lot of time, I think just because we’ve been doing it so much too, just getting exactly the right stands or amps and the right sizes for everything. When you have the right tools to do something it just feels really good and it’s fun to use them.”

Given the weight of the album, it’s easy to forget that the two are intensely happy to be playing music together. Says Doubek: “Just playing music every single day is kind of amazing and really, really lovely.”