How social media has changed the prom business on Fabric Row 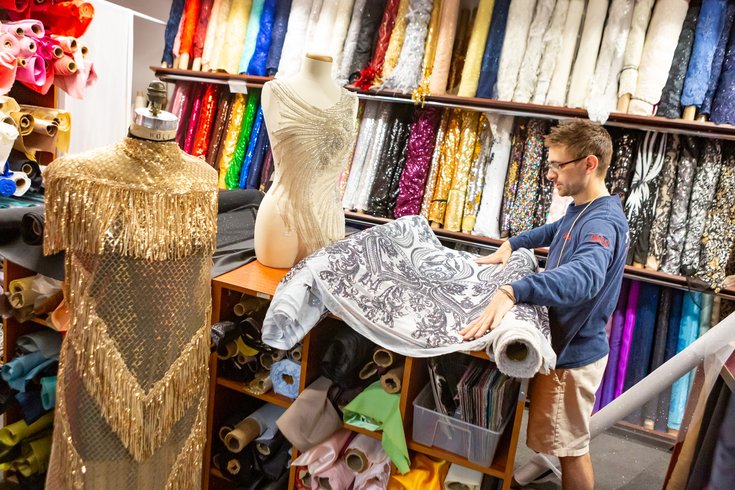 Joshua Fleishman of Fleishman's, a third-generation family business on Fabric Row, lays out a geometric sequin material that is trending for the 2019 prom season.

Each spring, prom dresses are a rite of passage for many young women around the country and Philadelphia is no different.

Used to be teens were influenced by fashion or teen magazines in the quest for the perfect prom dress. Not anymore.

“The amazing thing is we’re influenced now by a lot of pop culture and celebrity culture,” Fleishman said. “So when the award seasons happen, you get the likes of [Jennifer Lopez] and Nicki Minaj and different top female influencers in the world that then have custom-made red carpet gowns by fashion designers of the world. A lot of times it’s influenced by a photo, an inspiration, so we have to tell them [if] something’s not achievable. 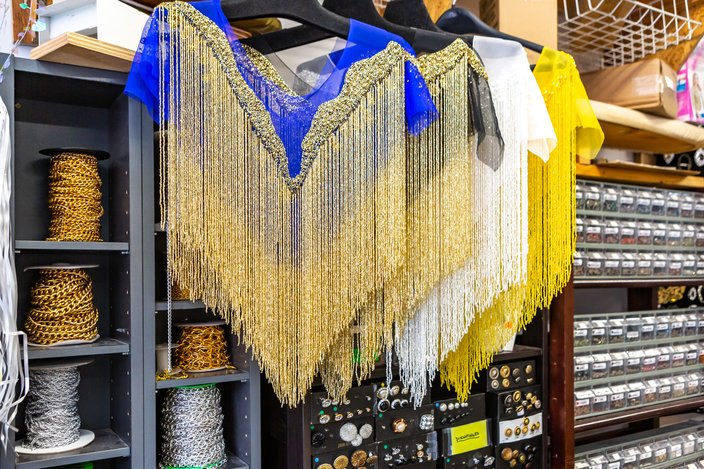 Glass beaded fringe tops hang near the front counter at Fleishman's on Fabric Row. “It almost moved away from actual fabrics this year, to getting an appliqué or statement piece to compliment a plain gown,” said Joshua Fleishman.

“It’s a mix of what’s feasible, because someone may have the vision of something but not understand the cost,” Fleishman said. “So when somebody is designing their gown and say it’s going to be a $1,600 dress, you have to explain the intricacies of just cutting a pattern out. Some want a complete train out of feathers and it feels like there’s a fabric made of feathers but it’s super expensive.”

While e-commerce has shifted the way people shop, Fleishman notes the unique experience people have when they come to Fabric Row.

“There are a great amount of people who want to see touch and feel,” Fleishman said. “They want to feel the fabric, that the color is true to what it’s described as. Every color, whether it’s navy or black, has a grayscale. People like to see it, touch it and feel it. E-commerce dominates the research sphere but hasn’t taken over our industry because of the insecurity people have in not getting what they think something (is online).” 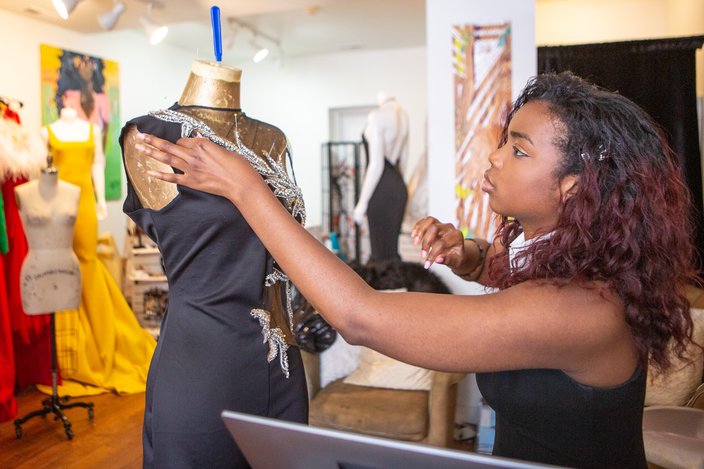 Monica Monique, owner of Oxymoron Fashion House, pins diamond appliqués on a garment before hand sewing them into place.

With about half of her business coming from her neighbor’s referrals, seamstress and fashion designer Monica Monique has been based on Fabric Row for five years and appreciates the creative support of neighbors like Fleishman’s. “I’m right on Fabric Row so I can sketch your dress idea out, but we can also go next door to physically look at the fabrics and if they don’t have it there we can go down the street. The options are endless, which is why I chose to put my business in the neighborhood. All of the resources are right there.”

Monique is aware of the way social media has changed the way some teens look for prom dresses.

“Social media has raised the prices of prom dresses,” Monique said. “Young girls want to be ‘dripping.’ The theme this year was ‘dripping.’ They want the diamonds, glitter and glam so they want the appropriate fabrics. Everybody this year wanted to wear silver because they wanted to look like diamonds. I feel like prom is the biggest day in a young girl’s life outside of their wedding.”

“It’s really about what you can dream up and what you want your dream dress to be,” Monique said. 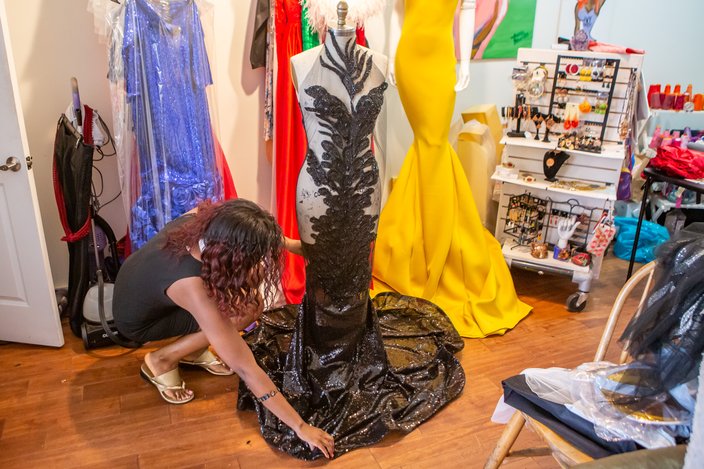 “Girls want something sheer and diamond - they want something that shines,” says Monique as she presents a nearly-finished black rhinestone appliqué for an upcoming high school prom.

As part of a family business that has been on Fabric Row for more than 42 years, Sherie Abrams of Jack B. Fabrics has seen Fabric Row change over the years.

“Fabric Row has been here for 100 years yet half of the people in the city don’t know we exist,” Abrams said. “Fabric Row has been blocks and blocks of all kinds of fabric and trimming stores, but over the years things change and the economy has changed. 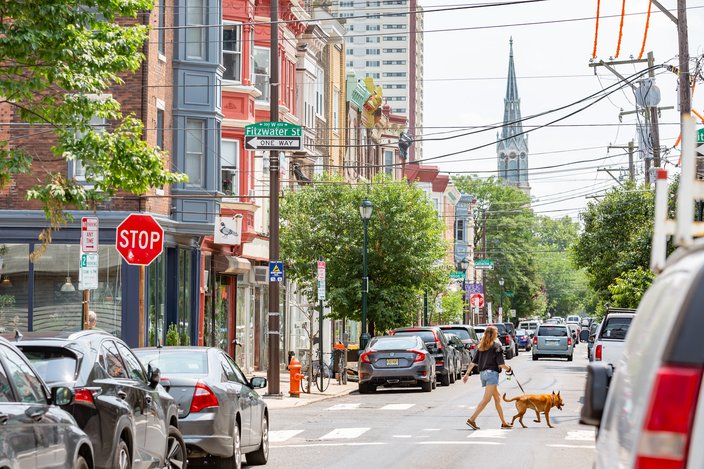 "Some of the older owners have passed away and nobody took over their businesses. Fabric Row has now become ‘Fabric Block,’ but we’re still here and going strong and we love prom season.”