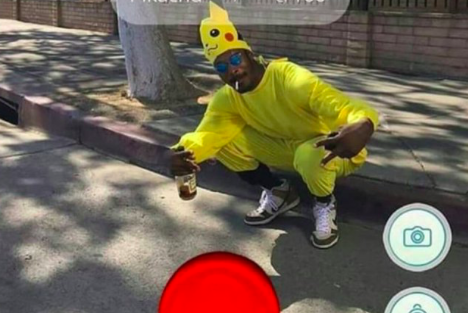 As soon as Nintendo let loose the virtual creatures of Pokémon Go, the real world became a new and much more magical place.

The free mobile geocaching game has uniquely and simultaneously swept both the internet and the streets by storm, encouraging people to get some light exercise while living out the fantasy of the app's spiritual predecessor, N64's "Pokémon Snap."

Within less than a week of the app's release, Nintendo's stock jumped 25 percent. It's beating Tinder at the App Store and it's poised to surpass Twitter in daily active users on Android.

On the other hand, all kinds of nightmare scenarios have been unfolding as augmented reality meets regular reality. There's been an armed robbery in Missouri, a dead body discovered in Wyoming's Big Wind River and plenty of people trying figure out why their property is being called a "gym" and scouted by mysterious cars. Speaking of which, the Washington DOT is warning citizens to steer clear of "Pokemoning" behind the wheel.

If your weekend includes looking for #Eevee on #PokemonGO, please do so safely. No Pokemoning from behind the wheel. pic.twitter.com/Kt9CmTOKiP

One impressively lazy or innovative man, depending on how you look at it, has even duct-taped his phone to a drone in order to catch em' all.

This is the kind of game we'd totally expect to go haywire in Philadelphia. The destruction of HitchBot last year and the general belief that we're the angriest city in the United States are precisely what make Pokémon Go an accident waiting to happen here.

It's being reported that many Philly gamers are disappointed with their Pokemon Go finds pic.twitter.com/0IgaOb6nT2

Maybe that bad rap has successfully been transferred to one of those "New Philadelphias" out in Schuylkill County and in Ohio.

They Real Life Playing Pokemon In Philly Off Henny pic.twitter.com/VnDbQPun3T

There are so many Pokemon in Wawa!!! pic.twitter.com/r9rbZISQcC

I biked to work today like a true PokeMaster, stopping at major Philly landmarks to catch #Pokemon. The dream is real. #PokemonGo

.@qvnaorg and #Philly has some crazy @Pokemon running around this eve! #PokemonGO pic.twitter.com/502Ig42woy

Lmao this Pokemon game got my little brother walking all around Northeast Philly 😂😭🙄 pic.twitter.com/RZUliaw6v5

Of course, all it takes is one mishap to spoil the fun. That's why the Philadelphia Police Department issued some safety tips for people playing Pokémon Go.

• Tell your kids about stranger-danger. The way that the game is designed can bring people together in the real world as they search for Pokémon in common areas called gyms and Pokestops. Obviously, you never know who you could run into while playing.

• Set limits on where your kids can go. “Don’t leave the street/neighborhood without me” can limit the amount of strangers that you or your kids could encounter.

• Watch the road! I’ve already seen a number of people — both kids and adults — so engrossed while staring at their phones and following a map, that they’ve walked right into the street and into objects. Pay attention!

• And as always, if you run into an individual that is seemingly up to no good — don’t hesitate to call 911!

We will add: If you're led to the bottom of the Art Museum steps, take a deep breath and make sure you're not being set up by a jerk Pokémon. That's something they were put on Earth to do.