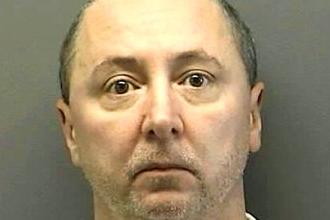 Police in Fairfield, New Jersey have arrested a man who allegedly impersonated a New Jersey State Police trooper and attempted to pull over a dancer at a gentleman's club in Vineland.

According to authorities, 53-year-old Michael Marlette had been stalking the dancer and attempted to pull her over in his vehicle at the end of the night on Monday, The Daily Journal reports.

The dancer told police that Marlette approached her vehicle, driven by a companion, and ordered her to step outside as he beamed a flashlight into the car. When the driver of the vehicle sped off, Marlette allegedly got back into his car and chased after them toward a police station on South High Street.

Marlette has been charged with impersonating a public servant, stalking, unlawful possession of a weapon, possession of a weapon for an unlawful purpose, and harassment. Though he was not armed at the time, police said the weapons charges are related to the flashlight, which he allegedly raised toward the dancer as he ordered her out of her vehicle.

Officials said Marlette was set free on 10 percent of $2,500 bail and has been ordered to undergo a psychological evaluation.