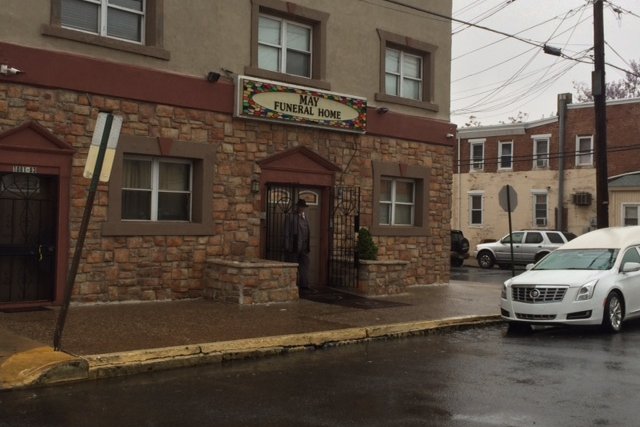 A man waiting to pay respects to his dead grandmother was assassinated on the sidewalk in front of a Camden city funeral home Thursday night. The postponed funeral concluded Friday morning, watched over by a flood of police, who are searching for a suspect called "cowardly" by Camden County Police Chief Scott Thomson.

A Camden man, standing in line in front of a funeral home to pay respects to his dead grandmother, was stalked and assassinated, shot eight times in the head and body Thursday around 6:30 p.m.

At the time of the shooting, about 40 people were standing outside the May Funeral Home at 1001 S. 4th St. in the Bergen Square section of the city, Police Chief Scott Thomson said Friday morning.

Thomson and a swarm of officers from his department flooded the neighborhood at 4th and Walnut streets Friday as mourners concluded a funeral for family matriarch Rosa Serrano, 70 – and contemplated organizing another service.

Killed in the fusillade of bullets was Jonathan Vazquez, 22.

He is the 14th homicide victim in the city of Camden so far this year, ahead of last year’s pace. Six of the 2016 cases have been solved. The city had a spate of seven slayings in April and two so far in May.

Thomson, who was at the scene of the murder Friday as police simultaneously searched for the killer and provided security to the mourners, many of whom were witnesses to the slaying, said it is fortunate no one else was shot, given the crowded sidewalk.

Thomson call the “targeted killing” of Vasquez “disconcerting” and “cowardly.”

The chief said his department and the Camden County Prosecutor’s Office “aggressively” worked the case overnight in hopes of identifying the shooter.

“We are providing security for the grieving family today so they may conclude the funeral services of their grandmother,” Thomson said.

Thomson acknowledged a recent surge of “close-range, multi-rounds, targeted hits,” despite an overall reduction in violent crime in the city.

A spokesman for the prosecutor said Friday afternoon that the investigation is continuing and no one has been arrested.