Poll: Majority of Americans unsatisfied with direction of United States

A new poll revealed a majority of Americans are not satisfied with the way things are going in the United States.

The Gallup poll, which was released Thursday, showed only three in 10 Americans - 29 percent - were satisfied with the country's direction.

During President Barack Obama's term in office, the satisfaction of Americans has averaged 24 percent. That is the lowest overall average across the full term of any president since 1979 when Gallup started measuring data. Jimmy Carter's administration averaged 19 percent, however, polling was only conducted three times during his final year in office. 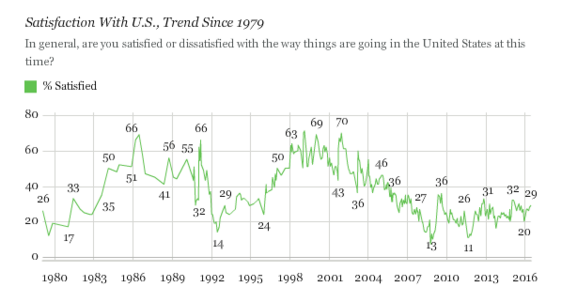 The results of the poll were also broken down by party identification. Unsurprisingly, 51 percent of Democrats were satisfied with the country's direction under President Obama, while only 10 percent of Republicans responded the same.

The poll was conducted June 1-5 via landline and cell phone interviews with a random sample of 1,027 adults living in all 50 states and the District of Columbia. The margin of error for the poll is 4 percent.