Would you be open to the Eagles bringing DeSean Jackson back this offseason? 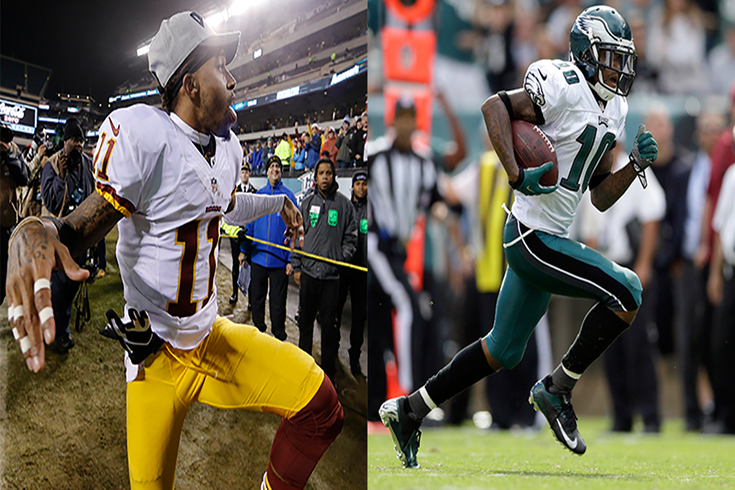 DeSean Jackson, before and after

Could DeSean Jackson be the Jeremiah Trotter of this decade? After being drafted in 1998 out of Stephen A. Austin, “The Axeman” was part of the Eagles’ rebirth under Andy Reid. Trotter made a couple of Pro Bowls in 2000 and 2001, when the Birds showed well in an NFC title game loss against the Rams.

Then Trotter became a free agent, the Eagles couldn’t come to an agreement with him, and he signed for big money in Washington. He was then stuck on two terrible R’s teams coached by Steve Spurrier while the Birds continued to make and ultimately lose in conference championship games.

Trotter came back to Philly on the minimum in 2004, and he helped the Eagles to a Super Bowl appearance (alas, not a win) as the team’s starting middle linebacker. He made a couple of Pro Bowls in his second stint here (remember, there were three), and despite flying the nest in the middle of his career, Trotter will always be remembered as an Eagle.

The comparison from “Trot” to DeSean Jackson isn’t a perfect one. As you’ll remember, there were other significant factors besides money that led to DeSean’s release. And since his exit, the Eagles have made the playoffs fewer times than Jackson’s Washington’s teams.

But with Chip Kelly now 3,000 miles away, Jackson left the door open for a possible return to Philly on Tuesday. So our question to you is a relatively simple one: Would you want D-Jax back in midnight green?

As we saw again this weekend, the Eagles wide receivers aren’t very good at getting open down the field. Jordan Matthews, the best player of the bunch, is better at creating space in the short and intermediate passing game. Even if Jackson has been criticized as a “one-trick pony,” it’s a pretty good trick, one that opens up the field for others to make plays even when he isn’t getting the ball.

There are reasons that you might want to look elsewhere, though. The general wisdom is that undersized, speedy players tend not to age all that well, and Jackson will turn 31 next season. As we all know, his personality in the locker room is not a small one. And everything comes down to money, as the Eagles aren’t exactly flush with cap space. With Jackson likely going to the highest bidder, maybe you’d rather look for a speedster in next year’s draft.

For the sake of the poll, let’s say the market generally isn’t robust and money isn’t too outrageous: Would you want D-Jax back in Philly?