Pop Dungeon: What can you do to save a party?

This week: Camera phones, concert bros and The B-52's 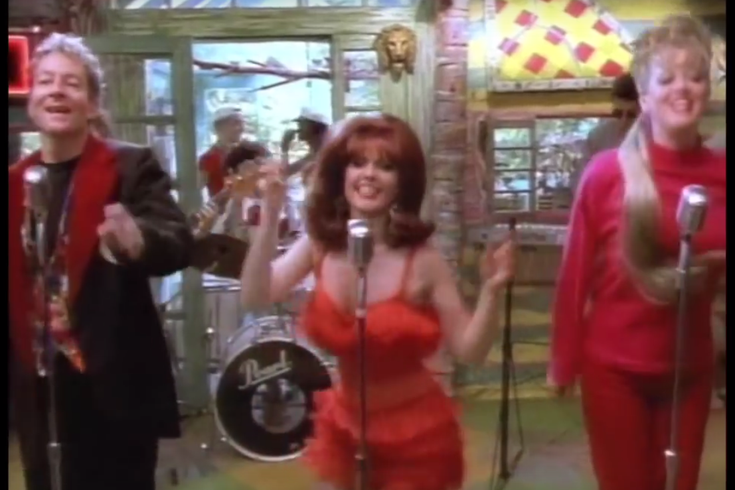 No camera phones in the Love Shack.

The first concert I ever went to was the B-52’s at the Mann. It was their Cosmic Thing Tour. I wore a silver go-go dress I found in my attic and a blonde bouffant bob wig. I was in seventh grade.

It was the absolute highlight of my summer. I had done something cool and had a blast dancing with people in the audience who were what I wanted to be like as I got older.

I was a deep fan. I’d memorized all the dance moves on my VHS tape labeled “B-52’s rockumentary + videos.”

Kate Pierson — specifically during the dance contest portion of the “Love Shack” video — accurately showcased everything I wanted out of life: high, abundant hair possibly insured by Lloyd’s of London. A long, red fringe body suit. An ill dance move that simultaneously beckoned and built a protective bubble of grooviness at the same time.

I hid rolls of toilet paper in my hair to build my very own beehive. I fantasized about what my portion of “Song For A Future Generation” would be like. (“My Name’s Maureen, I’m a Scorpio and I like root beer and Lucid Dreaming!”)

I just always thought than when I got older I would somehow have a life as fun as a B-52’s song.

When “Rock Lobster” came on at school dances it felt like everyone just cleared the floor for me, that it was just understood that it was My Special Me Time.

I got a T-shirt at the show and felt a little cheated that it was the middle of summer, with no school the next day. I wanted to show it off.

I just always thought when I got older I would somehow have a life as fun as a B-52’s song.

Sunday, 26 years later, I’m standing on the outer sidelines of the crowd at the B-52’s at The Fillmore Halloween Show.

My Cosmic Thing T-shirt? A roommate stole that, along with the silver go-go dress, five years ago. I’ve gotten older. It’s harder to get people to go out, let alone to dance. A couple years ago I had a freelance job in Georgia, the B-52’s’ home state. I tried to convince myself that my co-workers were as cool as the Deadbeat Club, but, alas, they wanted to get to bed early, and not imbibe, even when they had nothing to do the next day. My life as B-52’s song hadn’t quite worked out.

At the Fillmore, Kate is dressed like a blue-haired queen. Cindy is a willowy angel with wings and a halo. Fred, never disappointing, is wearing a curly, dirty blonde mullet wig and something that looks like an Oleg Cassini boat-collar dress with straight jacket buckles printed on it.

The crowd is littered with dweebs trying to film the show. Because the day after a friend goes to a concert aren’t you just dying to see their crap phone vids? They hold their phones above their heads like royal children, more entitled to seeing the show than anyone behind them.

For ticketholders on the wrong side of these aspiring auteurs, it’s like going to see “Planet Earth” at the IMAX theater and some stranger holds a map of Trenton over your eyes throughout the movie.

I’d had enough and so had Fred. The man is already feisty as hell, DO NOT SPURN HIM, PEOPLE. He yelled at someone to put their phone down, “Stop filming us! We’re punks!” and then threw a drumstick at them. It’s time for the “Dance contest!” he announced. Cue “Party Out of Bounds.” I took off anything encumbering me and stuffed it into my boyfriend’s arms and scooched as politely as I could toward the front.

About 12 feet from the stage, I found an oasis from the heavily dude-bro crowd (apparently there to hear “Roam”): three Asian teenagers in Sailor Moon costumes, pink wigs and googly eyes stuck to their foreheads and arms. I danced so hard — and was too stubborn to go to the bathroom — that eventually I felt pee running down my leg. I didn’t stop and neither did the pee.

The lyrics to “Party Out of Bounds” made me long for the good old-fashioned party dicks: The person who orders a pizza and doesn’t meet the pizza guy at the door. People who “just thought they’d drop in.” People who stay too long. This party’s problems involved a seemingly “Footloose”-level of Not Having Fun Or Dancing, even though the entire band that was entertaining everyone commanded, demanded and at times even begged us to DANCE.

I realized that I wasn’t “given space” to dance to “Rock Lobster” at those middle school dances. It was just a big gym with tons of space to orbit out into.

“52 Girls” could have been shaky, seeing as their friend Jeremy Ayers — who co-wrote the song along with Fred and Cindy — just passed away last week. When all the house lights flashed on for “Betty/ Brenda” and “Suzy/Anita” parts, it was truly a B-52’s eulogy.

Why is it so hard to put down the phones and have some actual fun?

I felt his pain. I was truly embarrassed by the mounds of douche taking up the first couple rows.

Why is it so hard to put down the phones and have some actual fun? Who cares if it’s crowded? Why are you standing up front if you want a ton of personal space?

People aren’t going to magically give you the dance floor to have Your Special Me Time. You’re going to have to share it with some real pricks who don’t want to have fun. But you have to dance. And deal with the human obstructors of the party around you. You have to find a way to have fun, and make it fun for as many people around you as possible. Look for those googly eye girls and stick together. After all:

You know sometimes they’ll even ruin your wife’s dress

Can you pull it back in line?

Can you salvage it in time?

What can you do to save a party?