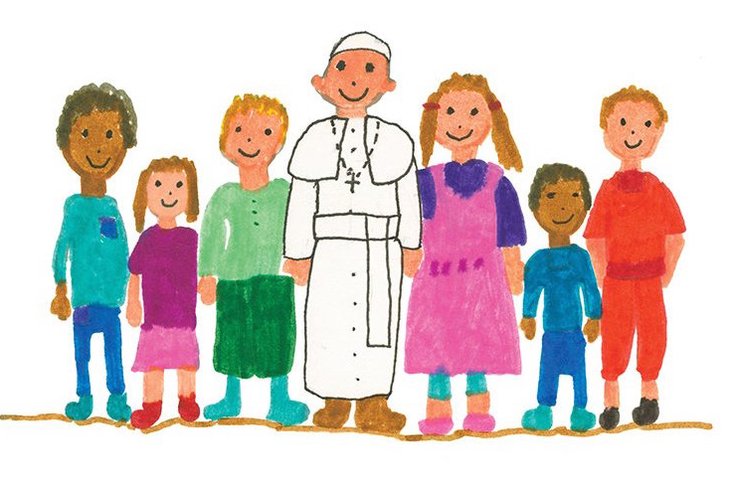 A detail from the cover of the book "Dear Pope Francis."

The season for writing letters to Santa is over, but children can write to another man who is jolly, loving and will actually write them back: Pope Francis.

Chicago's Loyola Press is publishing a book called "Dear Pope Francis" that features letters from kids all over the globe and the pope's response. A group of Jesuits delivered paper, markers and crayons to children everyone from Albania to Zimbabwe to encourage them to write to Il Papa.

When Francis visited Philadelphia this September, he brought up a child's question that almost stumped him: "Once a child asked me — you know that kids ask difficult questions — he asked me Father, what did God do before creating the world?" said Francis,  during his improvised remarks at the Festival of Families. "I assure you, I found real difficulty in answering the question. So I said what I’m now going to say to you: Before creating the world, God loved. Because God is love."

As the Wall Street Journal reported, the Jesuits collected 259 letters and chose 30 to be in the book. Eight children will even get to meet Francis in person this February in the Vatican.

The letter-writers include 10-year-old Mohammed from Syria, 9-year-old Mansi of India and 11-year-old Clara from Ireland. Just because they're young, though, doesn't mean the questions are easy: they range from theological puzzles like "What did God do before creating the world?" to universal issues like why parents fight with each other. 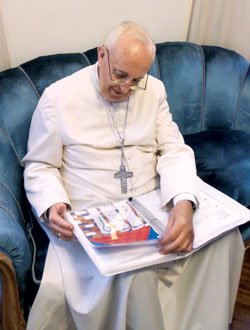 Pope Francis reads a letter from a child.

In America, Loyola Press plans to print out 150,000 copies of the book in English and 25,000 in Spanish. They're also offering the rights to the book for free to Jesuit publishing companies in other countries, hoping that it will be published in as many countries as possible.

In addition, the publishing house will include a letter-writing kit with envelopes and drawing supplies to anyone who buys the book directly from their website.

Separately, Pope Francis recently published a book for adults called "The Name of God Is Mercy." The 100-page book, published in 86 countries, criticizes more conservative members of the Catholic establishment and calls for the Church to embrace sinners instead of judging them.