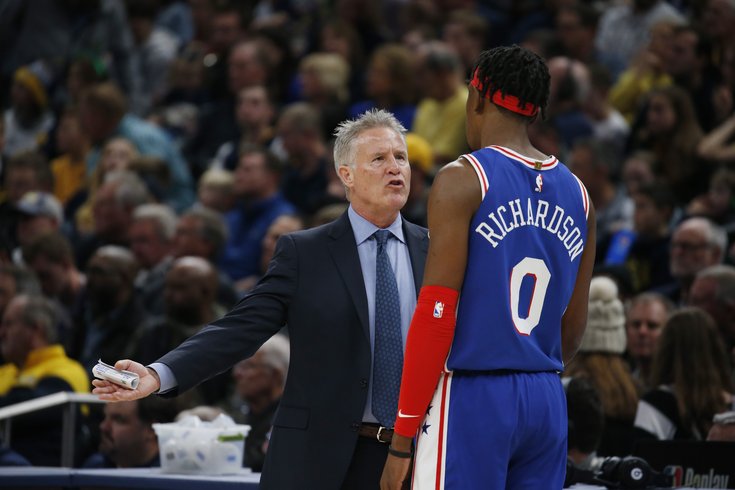 Each week of this Sixers season, there seems to be a different offensive crisis for the team to solve. They've been thrown off by zone defense, relied too heavily on post-ups, eaten space for one another, and at times looked like a team that will never be able to get out of their own way. They have not had the look of a title contender.

Even those of you who have never been a fan of Philadelphia's offensive style under Brett Brown will have noticed the differences from years past. The shooters they used to have flying around screens are no longer here, replaced by bigger, burlier players who want to back down mismatches and play in the paint. That has complicated life for Joel Embiid in particular, with teams sending more double and triple teams at the big man than ever before.

There may not be a fix for this group without some personnel changes, frankly. But after hoping his team might shake themselves out of this funk playing free-flowing basketball, Brett Brown has made the decision to step into a role he has preferred to avoid in the past: play-caller.

Every 10 games, Brown sits down with members from all over the organization to discuss "clump reports" that dive deep into where the Sixers are succeeding and failing and how to improve on that. The Sixers have lived out of a motion offense for most of Brown's tenure, residue from his days with Gregg Popovich and the San Antonio Spurs.

But the eyes and numbers within the organization saw the same thing fans could from the outside — motion offense isn't going to cut it for this group.

"The skill sets didn't really match," Brown said before Monday's win over OKC. "It's clear, statistics say this, that this team is better when I got to stamp my foot and call a play. I don't like doing that, but I have to do that...I have to help place them in perfect spots, feet there, body here, this is the bottom line. And from that vision line, from that starting point, reads can be made, nuances, winks and blinks, and oh, they overplay this, now what?"

"We come in with this year's team," Brown added at practice Tuesday, "and it was like a little awkward, and I'm thinking let's persevere with this, let's plow through this, I think by Christmas we can get some vibe and feel and flow to this, and it just wasn't happening. It wasn't happening. And so as we started feeling, we were kind of clunky and turnover-prone, and everybody's trying to grab a post, and space still rules my world, it was just not a great fit...it screamed, as this thing played out, of I've got to help them, I've got to put them in spots."

This Sixers team is never going to be a slow-it-down, grind-it-out team for 48 minutes with Ben Simmons on the team. Philadelphia's second unit, in many ways, is built around opening as much space for him as possible and empowering him to get out and run. When fully healthy, he has athletes (Matisse Thybulle), shooters (Tobias Harris and James Ennis), and a shooting big (Al Horford) whose missions are to flank their transition phenom. "Miss offense" is a huge part of any team's gameplan.

But those opportunities to run disappear when opponents make shots, and those opportunities to run definitely disappear when you get to the playoffs and the game slows down to a crawl. They are not the breakneck team they have been in the past, sitting 18th in the league in pace in early January. You don't suspect that number is going to climb much between now and mid-April.

Brown estimates he is calling plays anywhere between 50-75 percent more over the last three-to-four weeks. The long-term goal is to go back to a style where the game unfolds naturally for this group, playing "organic" basketball. For the time being, though, the players see the benefits of breaking from that mantra to embrace structure.

"It's just kind of made it a little bit more organized," Josh Richardson said following Monday's win over Oklahoma City. "I think we're all still finding a balance of getting the ball, running, and letting us play, and stopping, slowing it down, and really executing. But I think every game it has gotten better, and so it's just going to be a process."

"It's just a new team, running different sets and plays, it's not the same sets as if we had JJ [Redick] here or Marco [Belinelli], guys like that. It's a different team, so we have to just work out different things and find a flow," Ben Simmons added. "You start figuring out a little bit, what works and what doesn't work, who's in the game and who's not, you start to figure it out."

Even when the Sixers are able to run, there are reminders from the head coach about the mouths that need to be fed. None are larger or louder than this: they have an All-Star center who protects the rim and collects nearly 10 defensive rebounds per game, and he better receive an appropriate amount of touches in his preferred spots around the basket. That instruction is of a simple variety.

"That space is Joel's, everybody else move," Brown says.

Is this the cure-all for Philadelphia's offensive problems? Almost certainly not. Structurally, they still have the same concerns they had when they assembled the team in the offseason. From a motivational standpoint, it's also anyone's guess as to whether they will show up ready to go for a given game, and even on the nights where they come up with wins over good competition, they have stretches where they're lost in the woods.

So this is just a small component of getting where they need to go. Ben Simmons has to shoot, as everyone has known for months. Joel Embiid must stay healthy, which is in doubt at this very moment. Everyone is going to have to pull their weight to get this ship steered in the right direction, and this is one small part of Brown's role in that task.

• On the health front, we are still waiting for official word on what is wrong with Joel Embiid's hand. He did not participate in Tuesday's practice, and was undergoing off-site testing to determine if there are any larger issues for the team to worry about. We continue to play the waiting game.

Here's a bit of good news — Matisse Thybulle was a full participant in Tuesday's practice, going through a full scrimmage with reserve players and members of Philadelphia's player development staff. The Sixers say he responded well in that setting and they are encouraged by his progress, and that the rookie will go through practice again Wednesday before a determination is made on his status moving forward.

For those wondering, I did receive words of caution when I asked whether he would potentially be available for the Boston game on Thursday. Team officials stressed that Wednesday's practice is very important as it relates to determining his status, so don't start penciling back into the rotation just yet.

With Embiid's status up in the air, it would obviously be nice for Philly to get a boost off of the bench from Thybulle if possible.

• Encouraged by his play in a reserve role, the Sixers have allowed Trey Burke's partially-guaranteed contract to become fully-guaranteed for the season, which feels deserved given his recent contributions. Though Burke has given back a lot of the points he's producing on the other end of the floor, his presence has been necessary to help jumpstart the second unit.

"Sometimes playing the one, sometimes playing the two, I'm learning where the two is supposed to be at, all the play calls we got, learning where the one [is] and getting guys in their spots as the point guard," Burke said. "Not playing just one position, I have to be alert and be aware on the court...around the whole team, we're starting to build trust for each other."

While playcalling and understanding of structure have helped Burke as much as they have the rest of his teammates, Burke's ability to freelance is part of why he has given the backups a jolt. Channeled properly, his aggressive mentality is a boon for a team in need of some bench scoring.

Whether that will be enough to keep him on the floor as the season wears on is another story. There will be nights when Burke's shooting touch isn't there, and Brown's reluctance to play him in the first place could end up reappearing if Burke, a defensive target, isn't making up for his problems guarding with work at the other end.

But say this about Burke — he has certainly earned that contract guarantee and a current spot in the rotation. Perhaps his dad should have spoken up sooner.