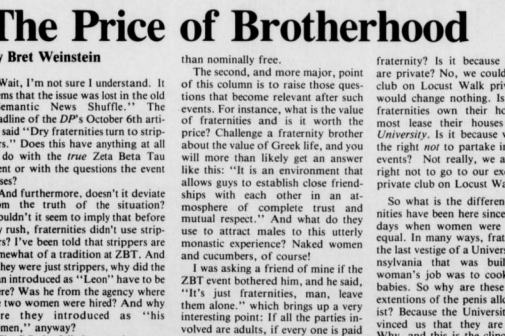 This screenshot of a 1987 column in The Daily Pennsylvanian was written by then-Penn student Bret Weinstein about an incident involving a fraternity and strippers. Weinstein, now a professor, is embroiled in a controversy over race at Evergreen State College.

Evergreen State College in Olympia, Washington, has become a battleground.

A commencement ceremony has been moved due to safety concerns. A threat promising to "execute" students caused a two-day shutdown. Law enforcement officials have gotten reports of protesters roaming the campus at night with sticks and bats and causing property damage.

At the center of the controversy is Bret Weinstein, a professor of biology at the 4,000-student, publicly accredited college. Protests had been raging on campus over accusations of institutional racism at the school, with student activists chanting: “Hey-hey, ho-ho, these racist teachers have got to go."

For years, the school has participated in a day of absence. Typically, students and faculty of color participate in a voluntary event in which they leave campus, an ode to a Douglas Turner Ward play in which all the black community members leave a town in the South, forcing their white counterparts to deal with life without them.

This year, the roles were reversed, as white students and faculty members were invited to leave campus. Weinstein objected to this and explained why in an email exchange with a school administrator in March. He wrote, in part:

There is a huge difference between a group or coalition deciding to voluntarily absent themselves from a shared space in order to highlight their vital and underappreciated roles . . . and a group or coalition encouraging another group to go away. The first is a forceful call to consciousness which is, of course, crippling to the logic of oppression. The second is a show of force, and an act of oppression in and of itself.

When the email leaked, Weinstein became an enemy of some student protesters, who confronted him outside his classroom. He's since defended himself in The Wall Street Journal and Fox News, refuting the label bestowed on him by some students of being a racist. In the days following, amid protesters calling for his firing, some have accused Weinstein of misrepresenting the day of absence as being anti-white.

It's an unusual position for Weinstein, who was a Bernie Sanders supporter, describes himself as a progressive and has inspired New York Times op-ed columns entitled "When the Left Turns on Its Own." What's not new for Weinstein, however, is being at the center of a campus firestorm.

In the late 1980s, as a student at the University of Pennsylvania, he became embroiled in a controversy over campus fraternities. As Forbes pointed out, reporting in The Daily Pennsylvanian shows Weinstein's role as a whistleblower while rushing one frat that used strippers in its events luring potential members.

As a freshman, Weinstein rushed the Zeta Beta Tau frat, which turned to strippers to attract freshmen in response to the university’s new "dry rush" policy. But as Weinstein explained in a recent interview, the show quickly turned into "simulated rape" with freshmen using cucumbers and ketchup on the women.

After attending the rush event, Weinstein became the primary source for the student newspaper in reporting on the incident. Weinstein revealed himself in a guest column for the paper, detailing the event, condemning the fraternity system in general and criticizing the university for trying to protect the organizations.

Weinstein later testified to the school’s Fraternity and Sorority Board that his role in the situation led to almost daily harassment. Per The Daily Pennsylvanian's archives:

“But for several months after I wrote my column, I received phone calls, usually late at night, mostly consisting of four-word dissertations on my character like ‘you are a f----t’ or 'you are an a--hole,’ and somebody hangs up.” The personal attacks against Weinstein include a flier advertising a November 7 party at Delta Kappa Epsilon which reads in part, “Bret Weinstein not invited.” Weinstein said that he did not react to the posters, but three students appeared at his door a few nights before the party and posted them on his door. The trio reportedly included DKE brother Steve Enquist who, Weinstein claims, threatened him when he came out of his room. "I thought it was pretty stupid,” he said, adding that Enquist told him “Look man, these (posters] had better be up in 20 minutes when we get back or else.” Enquist, a Wharton senior, said last night that the flier was meant to be humorous, adding that he visited the room because he had been told that Weinstein was tearing down DKE posters.

Thirty years later, Weinstein finds himself in a similar position, albeit in the age of the internet, where public defense is not espoused to a committee, but instead, of course, on Twitter.

Cults cut off contact with outsiders for a reason. Even I am not authorized to access the faculty directory, though I am faculty. Madness. pic.twitter.com/fGHvpxRI18