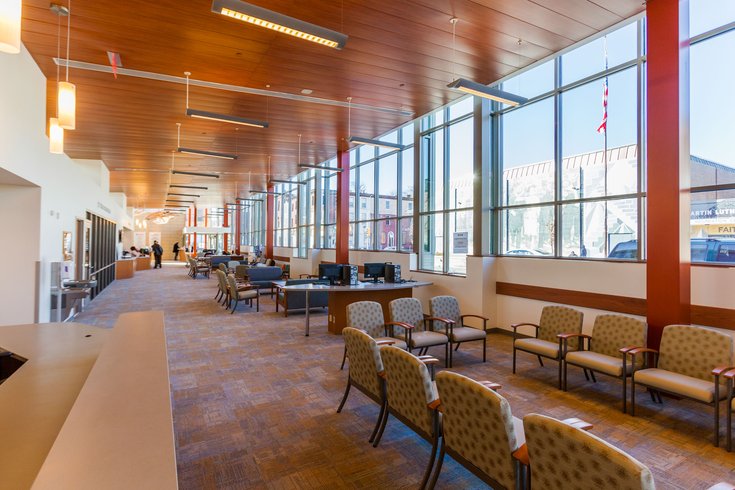 Project HOME is celebrating the grand opening of the Stephen Klein Wellness Center, which bolsters the nonprofit organization's healthcare services.

Read More
Project HOME has provided medical services to homeless individuals for 18 years, operating a free health clinic from a former rectory in North Philadelphia.
For years, the tiny clinic existed primarily by word-of-mouth.
That’s no longer the case.
Project HOME has a shimmering new facility to house its clinic, which is increasing its primary care capabilities to include pediatrics and prenatal care. It also is expanding to provide behavior health specialists, dentists and a pharmacy.
The Stephen Klein Wellness Center, a $15.5 million facility, opened in late December but is celebrating its grand opening Monday. The 28,598 square-foot facility, which includes a new YMCA, is expected to bolster healthcare services in one of the city’s poorest neighborhoods.
“We went from super tiny to giant,” said Monica Medina McCurdy, the organization’s vice president of healthcare services.
Project HOME has provided various housing services in North Philadelphia for years, building housing for homeless families and constructing nearly 50 units for first-time homebuyers.
The wellness center enhances Project HOME’s commitment to providing healthcare to underserved populations, a critical component of the nonprofit’s mission to break the cycle of homelessness.
“You have to crawl before you can walk and walk before you can run,” Project HOME founder Sister Mary Scullion said. “It’s taken us 26 years to get to this point in providing healthcare.”
Located at 2100 Cecil B. Moore Avenue, the wellness center sits in a medically underserved area spanning the entire 19121 and 19132 zip codes, where poverty rates hover around 40 percent and unemployment figures double the city’s rate.
“I think it’s a huge step forward, not only in being able to provide the services we’re able to provide, but a huge step forward in the 22nd police district for a symbol of hope, for a symbol of peace,” Scullion said.
The project first took shape about eight years ago, when community members identified a need for services that went beyond the free primary care services offered at the health clinic, Scullion said.
From there, a group of donors put together the funding necessary to make the wellness center a reality. Project HOME also relied upon longtime partner Thomas Jefferson University Hospital for healthcare recommendations.
“It’s been a labor of love and one of overcoming a lot of challenges,” Scullion said. “Healthcare is a very complex service delivery system — insurance people, regulations, this and that.”
Project HOME was designed as a Federally Qualified Health Center in 2013, a distinction that provides facilities in underserved areas with enhanced reimbursement from Medicaid and Medicare. It also received a two-year grant providing funding for uncompensated care.
The former clinic, housed at the St. Elizabeth Community Center, had four medical examination rooms. Project HOME partnered with Thomas Jefferson University Hospital to annually service about 350 people, who combined for about 1,000 visits.
The wellness center is expected to triple or quadruple those figures.
“Our goal is to get 3,500 visits by June,” McCurdy said. “We’re pretty close. We’re on track for hitting that.”
The wellness center will employ a full-time medical director, three physician assistants and two nurses. It also will continue its partnership with Thomas Jefferson University Hospital, which provides residences to supplement the staff.
As part of Project HOME’s goal to integrate healthcare, the wellness center also will staff a certified clinical social worker, a marriage and family therapist and a behavior health professional. A dental office, featuring five employees, and a pharmacy are expected to open this summer.
The facility also has space for wellness classes, exercise and training sessions.
“There’s lots of cool things we could do with this space,” McCurdy said. “We have big dreams.”
The center was financed by contributions from Klein, John and Leigh Middleton, the city of Philadelphia and Thomas Jefferson University Hospital, among other funders.