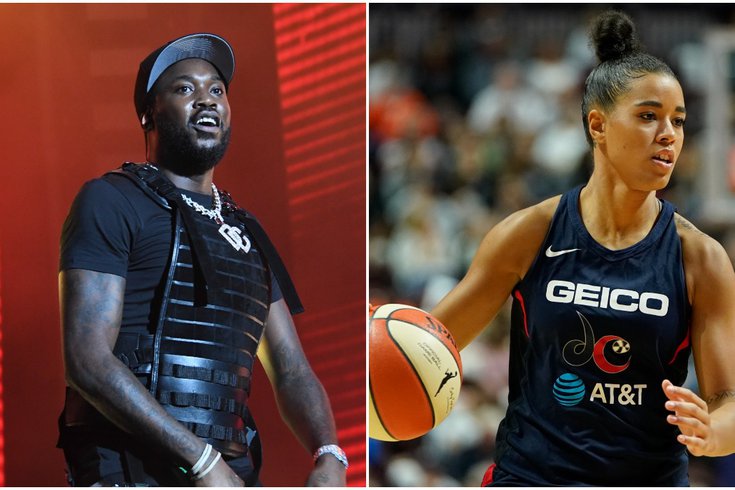 Both Meek Mill and Natasha Cloud have been on the frontlines of criminal justice reform in the U.S.

A number of public figures, including rapper Meek Mill and WNBA star Natasha Cloud, have joined together to call on the U.S. Senate to pass the George Floyd Justice in Policing Act as part of an effort to bring about criminal justice reform at the national level.

The "Protect Our People" campaign to push for more police reform in the U.S. is spearheaded by Uninterrupted and More Than A Vote.

More Than A Vote is a voting rights group that was started by James and other Black public figures amid the Black Lives Matter protests last year to fight systemic racism and energize, educate and protect Black voters. Notable members of the organization include Cloud, Kevin Hart, Michael Vick, Ben Simmons and Kyle Lowry.

The "Protect Our People" initiative was officially rolled out Monday during a special edition of "The Shop," the HBO talk show hosted by James and Carter that features a wide variety of guests having conversations and debates in barbershops.

"We want to constantly say 'Well our system is broken,'" Cloud said. "No the f*ck it's not. It's fully functioning as it was intended to work."

"Taking down statues, wearing Black Lives Matter t-shirts, putting sh*t on the floor, that's all crumbs," she later continued. "We want the whole meal. A meal is passing laws. It's passing this bill. It's putting in real legislation that can change our country."

The 29-year-old Broomall, Delaware County native starred at Cardinal O'Hara High School in Springfield and at St. Joseph's University. After helping lead the Washington Mystics to the franchise's first WNBA title in 2019, Cloud sat out the 2020 season to be on the frontlines of the protests against racial inequality last year.

It was through this experience, Cloud said, where she began understanding the power of her voice.

"Just understanding my platform," Cloud stated. "Understanding that God gave me this platform and intended it much more than to bring championships to Washington, D.C. I have an opportunity to be a voice for the voiceless. I have an opportunity to take on that role for my community and make this much bigger than myself and the game of basketball because at the end of the day, when we take those jerseys off, we're Black men and women out here in America. And because of that, our lives are always at a threat. I can be George Floyd. I can be Breonna Taylor, just by simply being in my home or being out."

"It falls upon our white counterparts to step up, understand how much momentum is behind this movement right now that has never been," Cloud continued. "We need to capitalize on it because this moment will go, and people will continue to live their lives. White people will continue to go on and live their lives and not have to fear what we fear. But as Black Americans, we're still going to struggle with this a year later."

Mill, the North Philly native born Robert Rihmeek Williams, shared some of his own personal experiences with police.

"I've probably been beaten by police three or four times and I come in the house ... bruised up face ... my mom says, 'What happened to your face?' She went right to the police station and filed an internal affairs report," the hip-hop artist said. "When I turned 18 and got locked up for [possession of] a gun, once I caught a case, they brought those same internal affairs statements back in court and basically used them against me. Like, you know, I'm an 18-year-old kid."

"I had like my own survival tactics coming up because I grew up in this," Mill later continued. "So like if I get pulled over and a cop from another race is extremely hostile, I don't even know if I could leave it in his hands. Like from what I've seen, if you see a white man choke a Black man out on TV, and of course that ain't the first time I've seen that happen, but when you see that as a young Black man, you don't know what you gonna do in that situation. I don't know if I wanna call for the supervisor or the captain to see if this guy that's screaming at me with a gun in his hand is gonna take my life from me. That's always been my life because I grew up in kinda like a ruthless environment. You gotta think at 18 years old you gotta carry a gun. I don't wanna carry a gun. Guns are heavy, guns hurt people. I always knew I could do time for a firearm, but I don't think I could do the graveyard."

Mill saw his own decade-long battle with the U.S. justice system end two years ago after he pled guilty to a misdemeanor gun charge and saw all other charges against him subsequently dropped. As part of the plea deal that Mill reached with the Philadelphia District Attorney's Office, any future jail time or further supervision on probation was prevented.

The rapper was originally found guilty in 2008 by Philadelphia Court of Common Pleas Judge Genece Brinkley on seven different charges, including drug dealing and gun possession. He was sentenced to 11-23 months in prison followed by eight years of probation.

But in July 2019, after a series of appeals and hearings, Pennsylvania Superior Court judges overturned Mill's conviction, noting issues with the credibility of the police officer who had testified against him at his trial. The three-judge panel also overturned Brinkley's parole violation findings.

Mill has since become an advocate for criminal justice reform. He's the co-founder of the nonprofit organization REFORM Alliance, which focuses on parole and probation reform. Mill started the organization alongside the likes of rapper Jay-Z, New England Patriots owner Robert Kraft and Philadelphia 76ers co-owner Michael Rubin.

The George Floyd Justice in Policing Act was introduced in February and passed the U.S. House of Representatives in March. The bill has yet to be brought up for a vote in the Senate.

Among the reforms to policing practices and tactics that the legislation calls for are the following:

• Curtailing unnecessary use-of-force procedures and restricting the use of no-knock warrants and chokeholds.
• Creating a national registry to compile data on complaints and records of police misconduct.
• Establishing new reporting requirements, including on use-of-force, officer misconduct and routine policing practices like stops and searches.
• Lowering the criminal intent standard from willful to knowing or reckless in order to convict a law enforcement officer for misconduct in a federal prosecution.
• Limiting qualified immunity as a defense to liability in a private civil action against law enforcement.

If passed, the bill would help increase police transparency and accountability and protect Black lives from police brutality, according to advocates.

Floyd, a black man, was killed in May 2020 while in the custody of Minneapolis police after officer Derek Chauvin knelt on Floyd's neck for nearly nine minutes as three other police officers watched.

A jury found Chauvin guilty on all three charges against him in April. A judge sentenced him to over 22 years behind bars in June.

Floyd's death sparked demonstrations and protests last summer across the country calling out systemic racism and police brutality in cities such as Philadelphia.