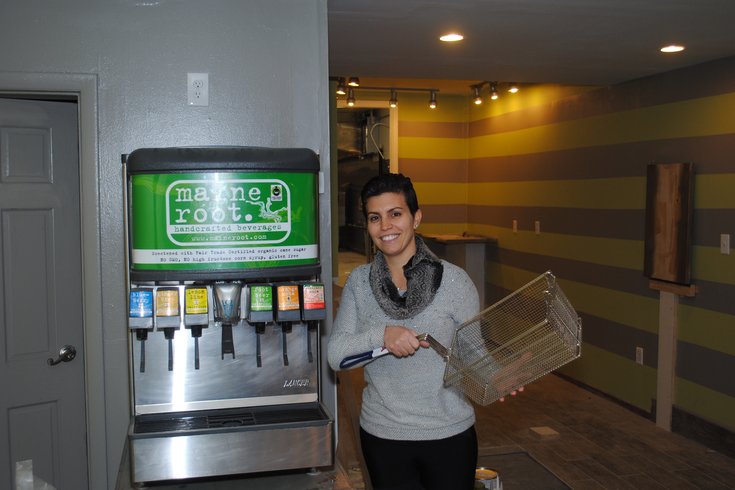 The restaurant is open at the old Chhaya location at 1823 East Passyunk Ave., a 26-seater that, Marlo said, has only been slightly retouched and aims for a "bright-lit, earthy feeling" that's more "modern farm" and less "farm fable." There's also a casual, family-friendly vibe, thanks to an arcade table featuring 50-plus games; proceeds from the table will go to MANNA.

But the main focus of P'unk, she said, is making a good burger -- especially in a neighborhood that's currently, from her perspective, starved of one.

The overarching goal of the restaurant, she said, isn't to one-up the "Chef So-and-So" variety of East Passyunk Avenue, but to simply offer a menu of specialty burgers that cater to everyone.

We open Friday 10am! Get ready for The Cali - turkey burger, bibb lettuce, cheddar and house-made guacamole pic.twitter.com/D4Cgm9yVSv

"Our goal with SliCE is to have a pizza for everyone, and I have that same goal with the burger place," she said. "For the meat eaters, the gluten-frees, the vegetarians, the ones who want a spicy burger -- we want to have something for everybody."

Also on the menu is organic Maine Root fountain sodas, and a variety of shakes. (Because there's no such thing as a good burger joint that doesn't serve shakes.)

Still, the real attention-grabber here -- especially for anyone living in the neighborhood -- is that P'unk burger will be open late: until 3 a.m. on Fridays and Saturdays. (They're open until 10 p.m. on weekdays.) Take-out and delivery is also be available.