Friday's event was all about pairing small spaces with big ideas 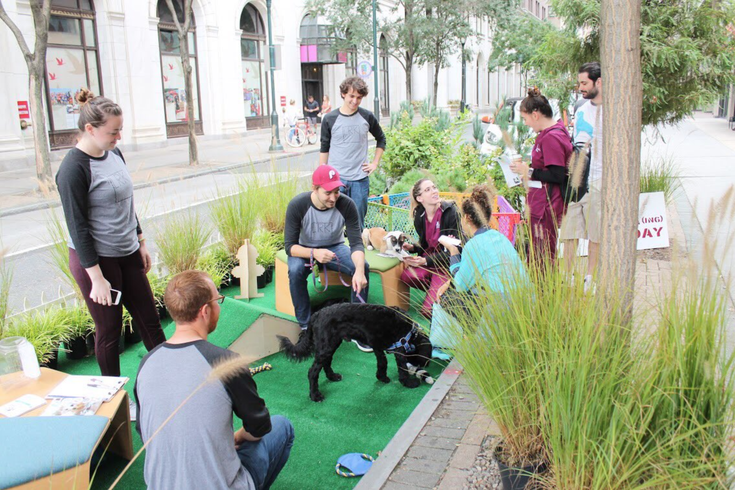 For the uninitiated, the streets of Philadelphia might’ve been a bit more whimsical than expected on Friday as the city celebrated the 14th annual PARK(ing) Day.

PARK(ing) Day, which began in 2005 in San Francisco, happens every third Friday in September. Artists, activists and everyday citizens across the country turn metered parking spaces into temporary public places, illustrating two things: how much valuable public space in cities is spent on cars, and what can be accomplished with tiny spaces.

Philadelphia, a city which acknowledged Thursday just how crowded Center City has become thanks to vehicles, celebrated in a big way.

We’ve assembled a sampling of the best displays below.

It's like the ultimate traffic cone. Great visibility for @Land_Collective at their pop-up space on N. 2nd Street in Old City. #PARKingDayPHL pic.twitter.com/AnYxUcpRdL

Space 1026, a gallery and studio space, set up a mini skate park near the convention center (right next to traffic!)

Lots of goings on at this year’s #PARKingDayPHL including a mini skate park! Good work @Space1026 pic.twitter.com/K9RGpAwlkR

WRT Philadelphia set up an impossible-to-miss house of pink umbrellas across from the Midtown III:

Architecture firm Looney Ricks Kiss brought puppies to Chestnut, turning it into BARK(ing) Day. We’ve got to say, this was a pretty strong move:

There's gotta be some puppies at one of today's #PARKingDayPHL spots. And we found it at LRK's space on the 600 block of Chestnut Street. Adorable! pic.twitter.com/UBcaL9w7jU

Conrad Benner from Streets Dept. teamed up with Mural Arts for a Get Out The Vote-style pop-up event, where you could actually register to vote in this November’s midterms:

SURPRISE: @muralarts and I have a pop-up #ToThePolls voter registeration tent today outside LOVE Park for #ParkingDayPHL!

The Center for Art in Wood had a very hands-on approach to PARK(ing) Day: you could write down a wish on a block of wood, and then use a planer to add your wood shaving to a big paper ram.

Write your wish on a piece of wood, shave it with a planer, then add your shaving into our ram’s wishing coat. Also, we have @jessicaeldredgestudio on hand making dyed paper flags. Just wishes & rainbows here until 4:30 — c’mon by! #PARKingDayPHL #PlayfulLearningPHL pic.twitter.com/B4cQmxcHHG

Philadelphia Department of Planning & Development got in on the fun by creating an enormous board game near Logan Circle:

The SEPTA parklet is a pretty strong replica of your favorite bus (sans bed bugs):

Stop by @SEPTA headquarters at 1234 Market St & participate in the “Electric Bus Toss” with @SEPTAPHILLY for the Park(ing) day event. #PARKingDayPHL 🚌 pic.twitter.com/ksdMF89Cr4

J Davis, another architecture firm (wonder why they had so much fun today?), built a couch of used CDs:

See any good parklets or street displays in the city today that we missed? Drop a link in the comments or send me an email at adam@phillyvoice.com.