Here's what Philly's first day back to school looked like

Students in the School District of Philadelphia returned to classes Monday, Aug. 27 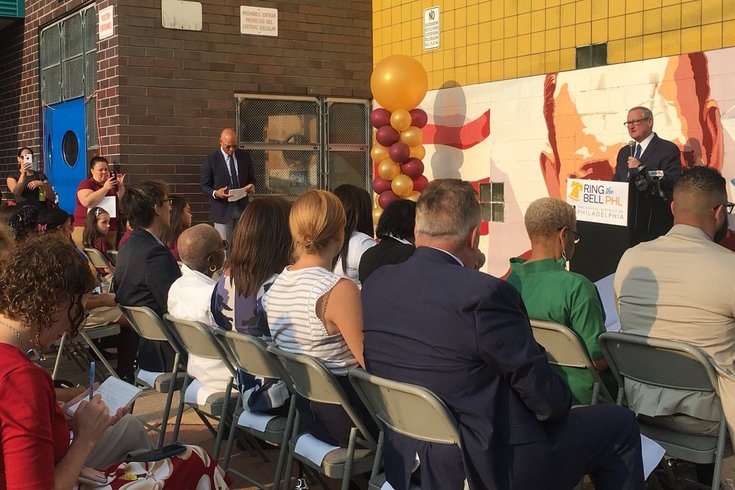 Today was the first day back to school for 128,000 Philadelphia public school kids and the city certainly rang it in with character.

This is the first time public schools in the School District of Philadelphia opened before the Labor Day holiday.

On social media, parents and teachers were hashtagging #RingTheBellPHL in honor of the start of the new school year. And yes, they are actually ringing bells (and not just to start first period).

The annual ceremonial bell-ringing took place at 8 a.m. this morning with Mayor Jim Kenney in North Philly at Munoz-Marin Elementary School, where he addressed reporters, teachers and some parents.

"This is the most important economic investment we can make in our city," he said.

We are at the most iconic bell in #Philadelphia with @PhillyMayor and @SDPHite to remind you to #RingTheBellPHL on Monday, August 27 at 8am. @INDEPENDENCENHP #LibertyBell pic.twitter.com/asVl60dEVS

This year is especially significant for public education in Philly, as it's the first time in years that the district will be locally governed.

In July, the School Reform Commission — which took over Philly schools in 2001 and was headed by the state — officially dissolved and was replaced by Kenney's newly appointed nine-member Board of Education, which looks after 205,000 students from public and charter schools.

Many are hopeful about the board's members, including former SRC chair Joyce Wilkerson as it's president, and their abilities to enact local change. How those changes will impact public education in the city remains to be seen.

Here's what the first day of school looked like this morning in Philadelphia. Beware: Some of these photos are extremely cute.

Someone looks ready for the first day of school. We are here at #MunozMarinSchool and everyone is ready for #Back2School including Sadilynette who is starting Pre-K today. “I’m ready to go in,” she whispered to her mother. #RingTheBellPHL pic.twitter.com/mK82ZklMO6

#RingTHEBellPHL for the third time! These kids are old pros now. pic.twitter.com/0v6x19aLX8

— Philadelphia Board of Education (@PHLschoolboard) August 27, 2018

Our Coordinators work hard to impact the space in which the magic takes place! Listen to this daily affirmation shared by Logan students. Reminders of greatness mean everything! So happy to see the deep layers of love today and everyday!#CommunitySchoolsPHL #RingTheBellPHL pic.twitter.com/JS2s3kOktN

@bdougherty1656 and Principal Lukov are getting students to their classes so they can #RingTheBellPHL for the first day! Don’t be late to @southwarkschool pic.twitter.com/m1yIJQKXYm

Good luck, kids! Have fun! Eat your greens! Be creative! And work hard! But not too hard!