Q&A: Candace Quarrels of 'The Book of Mormon' 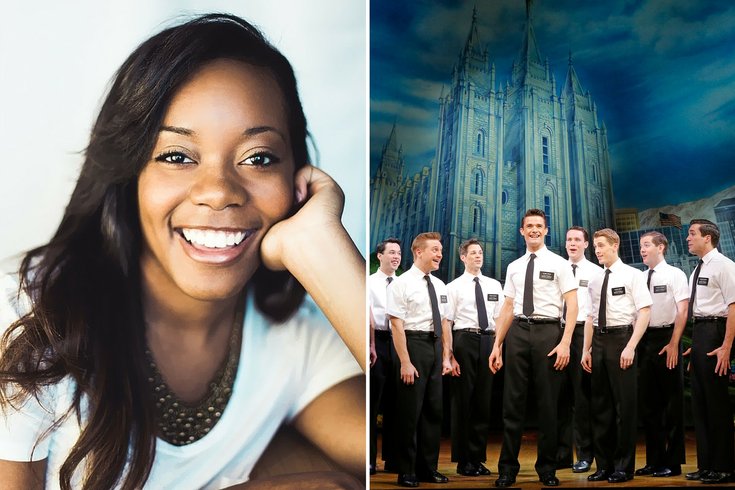 Candace Quarrels, left, stars as Nabulungi in the Second National Tour of "The Book of Mormon." Right, the cast of the First National Tour.

Last time gut-busting, Tony-winning musical comedy "The Book of Mormon" came to town, it broke a serious selling record. During its six-week run in the fall of 2014, it broke the Forrest Theatre's house record by grossing over $1.7 million in a standard performance week, a record it had already broken during the run's early weeks.

Thanks to its massive popularity, the show is back at the Forrest Theatre from Tuesday, Nov. 24 through Sunday, Dec. 27. The religious satire musical from "South Park" creators Trey Parker and Matt Stone follows two Mormon missionaries as they travel to northern Uganda in hopes of converting villagers to their faith. The villagers they meet, however, have other things to worry about -- like poverty, famine and a despotic leader -- and thus the path to potential conversion is a bumpy one filled with hilarious hi-jinx.

Making her national tour debut, Candace Quarrels stars in "The Book of Mormon" as the show's female lead, Nabulungi, a woman the missionaries meet in Uganda. Cody Jamison and David Larsen star alongside her as Mormon Elders Cunningham and Price, respectively.

We caught up with Quarrels on the road as she heads toward Philly for the first time.

She’s kind of like the Disney Princess, I like to call her, of the village. She’s just this girl who is super naive but has a huge heart and just wants to help everyone in her village and make friends and gets her feelings hurt along the way but learns a lot of lessons as well.

How do you relate to your character in such a zany play like "The Book of Mormon"?

She’s so much like me. It’s not hard at all to relate to her. She’s just young and has this kind of rosy, not very accurate outlook on the world, but she’s also been through so much.

I like to say, from Trey and Matt who write South Park, you kind of know the humor you’re getting into with the show, but they also did so much research on both Mormons and Ugandans. So everything in the show, though it’s funny, it’s all incredibly true. We don’t make anything up about the Mormon religion, about any of the things that are happening in Uganda. It’s all very real, which I think is how this show gets away with what they’re saying because, though it’s not the stuff that we say out loud at the dinner table, we have to have someone say it or else it’s all going to go overlooked. It’s fun to be able to have fun on stage every night but also give a truthful performance that means something as well.

Do you have a favorite part of the show?

My favorite number is “Baptize Me.” I get to do that with Cody and we have fun every night!

What city are you looking forward to most on this national tour?

Next year in March, actually my birthday week, we’re going to be home in Memphis. I’m from Memphis so I get to be home for my birthday and I’ll get to stay at home with my parents and so that’ll be a lot of fun. A lot of my hometown, they haven’t seen the show so now all my friends and family and stuff will all be out. 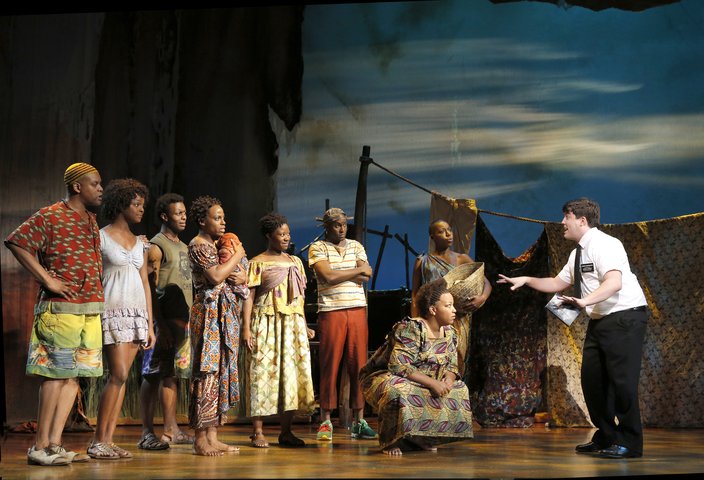 The cast of the First National Tour of "The Book of Mormon." (Joan Marcus, 2013)

Are you excited to come to Philly?

I’ve never been to Philly before. I’m going to be eating lots of cheesesteaks and I’m going to be living in Rittenhouse Square which I’m excited about that, I hear that’s a really awesome area.

I’m well-traveled now, but before I got this job I pretty much stuck to home, so every city we’ve been in has been new to me. I make sure to go to as many museums and see as many sites and learn the history and eat as much food as I possibly can in every city. So I’m pretty excited.

What's the hardest part about being on tour?

I think after living in hotel rooms for a year, they all start to blur together. But I have my dog on the road with me which is really nice, so I have a little piece of home in every city. I think it’s mostly just the not having a home base that gets difficult, but getting to travel, I can’t really complain that much, you know?

What should Philadelphians know about "The Book of Mormon" if they haven't seen it already?

It’s just an amazing show. Anyone who can possibly come see it should definitely come. We have a lottery if you feel like you can’t afford the tickets – I know they can get a little pricey – but two hours before the show if you come in and put your name in this drawing they pick 20 names and you get two tickets for $20 each, which can’t be beat. And they’re some of the best seats in the house.

So if you get an opportunity to come, I hope that everyone takes it because it’s truly an experience and just one of the most fun nights of theater anyone can possibly hope to have.

Click here for more information on "The Book of Mormon" at the Forrest Theatre.