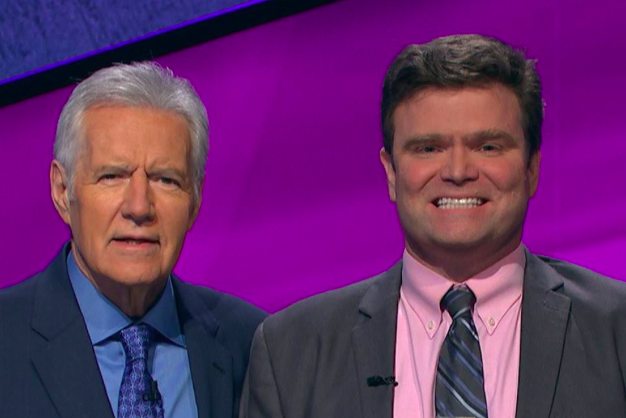 On Friday, February 15, 2019, Rutgers University graduate and New Jersey native Eric Backes became the first person in the history of the television game show 'Jeopardy!' to correctly answer 'Gritty' to a trivia query.

By now, you’ve likely heard that Gritty attacked the shores of the television game-show “Jeopardy!” on Friday night’s episode – as the $800 answer (phrased in the form of a question) in the “World Almanac 2018” category.

The clue (to be read in your mind in the voice of Alex Trebek): “The World Almanac’s editors picked items for a figurative 2018 time capsule, including this furry orange mascot of the Philly Flyers.”

The man who requested that question is Eric Backes, an attorney and government-relations professional from Round Rock, Texas, north of Austin.

The 41-year-old has substantial Philadelphia ties and, while going for his fifth consecutive win on the show, wasted no time at all to buzz in and say, “Who is Gritty?”

“Gritty, yes!” came Trebek’s response in a snippet you can see for yourself via this link:

“What is: it me Alex.” @GrittyNHL @Jeopardy #jeopardy #gritty pic.twitter.com/sIWrJJjMUw

For its part, Gritty acknowledged this momentous occasion in the fashion we’ve come to expect from the nightmare fuel turned international legend.

Sadly, that $800 was not enough to drive Backes to a fifth victory.

He was outmaneuvered in a Final Jeopardy clue which all three contestants got wrong – the category: 19th century inventors – but one foe wagered less.

That valiant run added another line to Gritty’s curriculum vitae, so we reached out to Backes, who called from Texas on Sunday afternoon to offer his thoughts.

Turns out that his local ties really came in handy when the Flyers mascot popped up on Trebek’s big board of trivia.

What follows is a Q&A with the man who took an unlikely shine to Gritty as a fan of one of the Flyers' biggest rivals:

PhillyVoice: Take me through the moment when that question came up on the show.

Eric Backes: I knew the answer immediately. The round was all about 2018 and as soon as I saw "Philly" and "mascot," I knew what they were going for. You’re about 15 to 20 feet away from the gameboard that you’re reading questions off. When Alex is reading, you can’t ring in until he’s done, but I look for keywords in the text.

It was pretty easy to recognize since I’m already a member of the ‘Gritty [memes for Philly teens]’ group on Facebook. The guy who said "I’m pretty sure Eric’s in this group" when someone posted about it is a good friend from college.

PV: The episode aired on Friday, but when did all this happen?

EB: Last January, I took the test to be on the show. We were living outside of Baltimore at the time, so I requested that if I was going to do an in-person test, it be in Philly because that was the closest one.

By the time I got the email that passed the test and was picked randomly to come in, I was living in Texas. My wife had gotten a job at the University of Texas in Austin. I asked if there was any chance I could change it and they had a test in Memphis (Tennessee) in September. It was the exact same time that I was going to be in Nashville for work, so I took a bus from Nashville to Memphis and flew home afterwards.

The Monday before Thanksgiving, they called and said, ‘Hey, we’d like you to come to Los Angeles to be on the show. Can you?’ I said, "Yes, of course!" I’d started taking the online tests in 2006 and before that would send postcards in trying to get on the show.

PV: What are your local ties?

EB: I grew up in Bergen County and my wife is from Berlin in Camden County. She was living on Catherine Street in Queen Village (when we got together). We both went to Rutgers University. I was sure to bring up that I’m originally from New Jersey on the show!

PV: Now, let’s talk about Gritty, who was clearly happy that you’d gotten the answer correct.

EB: Even though I’m a Rangers fan – I grew up listening to them on The Fan (sports radio in New York City) – I’ve been on board with Gritty from day one.

People were against him when he was introduced, but I was like "No, this is surreal and this is great." The whole "It me" thing, it’s hilarious. I really like how Gritty has been adopted by people of various political persuasions, too. I think it’s great.

Whoever’s playing him has a really good sense of humor. I’m a Mets fan, too, but I’ve always liked the Phanatic. I kinda like mascots, I guess. I had a photo taken of me with Youppi, the mascot for the old Montreal Expos and now for the Canadiens.

I just thought it was cool that, with the Flyers being known as a tough team, that they called the mascot "Gritty." The Rangers don’t have a mascot.

PV: What would you like to tell Gritty, who tweeted about your answer?

EB: I videotaped the episode when we were watching it last week since I knew when it was coming up in the show. I wanted to have a movie of the television of my response so I could link to it in the Gritty group.

I may not do too many things that are significant in life, but I got to say, "Who is Gritty?" on Jeopardy and – I looked it up – I was the first person in the show’s history to give Gritty as an answer.