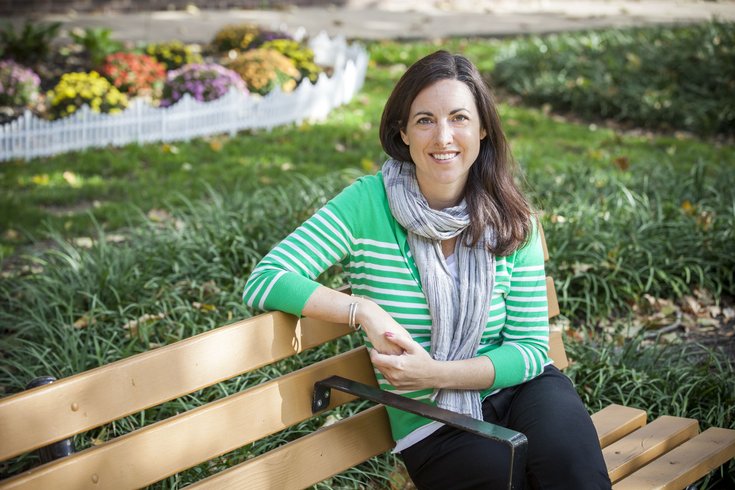 Melissa Murray Bailey sits tranquilly alone on a bench across from her daughter’s pre-school, close to her family’s home in Society Hill.

The Republican candidate for mayor, in a town where registration skews roughly 7-1 in favor of Democrats, Murray Bailey scrolls through messages and emails on her phone, Kate Spade handbag at her side.

Three weeks until the mayoral election where former city councilman Jim Kenney, the Democrat, is a prohibitive favorite, there is a relaxed look on her 36-year-old face. It’s a rare moment of solitude just for her before a schedule of small-scale community meet-and-greets, grass roots fund-raising and later in the day a gathering with party true believers.

Murray Bailey says she is happy to not be cooped up, to be able to sit outside in the fine fall air, despite the drone of a leaf blower, the din of traffic.

She presents as exactly what she is: A business executive on a break from her post at employer branding company, Universum.

She’s a former Democrat, reared in South Jersey, recently moved to Philadelphia and recently registered Republican to be more in line with her conservative fiscal perspective. Murray Bailey has never run for office before.

No handlers are present.

She wears no campaign buttons. No American flag pins. She carries no campaign literature or briefing binders.

She listens, and then responds. Nothing sounds programmed.

PhillyVoice joined her on the bench, and chatted for the better part of an hour.

PV: Other than a party label and gender, what most distinguishes you from Jim Kenney?

MMB: I’m not a regular candidate. I’m a person. I rushed here so I could walk my daughter to pre-school. I don’t have enough time for that anymore.

I’ll have two people from the campaign with me later today. But I can handle myself. I know what is going on. I’m a regular person. I have enough gut trust.

I was called to action.

Jim Kenney, he’s different. He’s been in the political class his entire life. There’s a stark distinction. Voters can choose an alternative.

PV: Who does the Republican Party in the city represent?

MMB: Republicans in Philadelphia represent people who want more. Not spending more, but a return on their investment more.

We’ve had the tax increases. Now we want accountability and change.

There was a revolt against the Republican party in Philadelphia 60 years ago and the city has been run by Democrats ever since. The Democrats have stayed in place through pressure and bullying.

PV: Why are so few Philadelphians Republican?

I had a union leader take a picture with me. He was wearing one of my T-shirts. Then he realized. He asked me to erase the photo. We had to show him on the phone that it was gone. That's how afraid he was.

PV: How do you go from never having run for office to major party candidate?

PV: How do you govern if elected in a predominately Democratic city with a city council of mostly Dems?

I have a ton of experience with that as a (business) leader who works with a board of directors who all have their own views.

Even the current mayor has problems working with council. I’ll work for the common good.

PV: What’s it like to get up, get out, fundraise and campaign every day against such long odds?

MMB: You mean "Do I think I’m crazy?" I surely do. I’ve heard so many experts discuss this. Some days I do wake up and ask myself “Am I crazy?"

But then I talk to people in the community. And they thank me. I know I’m doing the right thing.

PV: The last debate with just Kenney seemed a bit predictable and maybe even dull. How do you think that will change when the next debate features all of the candidates?

MMB: This will be even more predictable with more candidates. That’s because of the top-of-mind questions that everyone feels they need to ask about: education, jobs, poverty and safety.

With more candidates, there will be fewer unpredictable questions.

PV: What’s your opinion of public education in Philly? Where will your daughter, Cricket, go to kindergarten?

The lack of parental involvement in schools is a sad state of affairs. We have some of the top schools in the state and some of the worst.

One of the problems is the "one size fits all" approach. Different neighborhoods have different needs. We need a more customized approach from kindergarten on.

We need to test children when they first come to school and then catch them up if we have to. But instead we move them up, and then it becomes worse.

PV: Which Republican presidential candidate do you identify with most?

MMB: I have a lot of similarities to Carly (Fiorina, former Hewlett Packard CEO). We have a solutions-minded way. She talks about a systematic approach to problems.

Allowing a person who is supposed to protect rights to work in your office and to completely ignore the facts, that there are a lot that is discriminatory going on, is horrible.

People in his office are blatantly disrespecting women. It infuriates me.

He has a misogynistic way of running a government office.