This morning we identified the Eagles' biggest offseason roster needs from most glaring to most stable. In that article, we identified the quarterback position as the fourth-most glaring need on the team. The Eagles could certainly do a lot worse at quarterback than Nick Foles, but a big reason QB was so high on the list is because of the extremely heavy importance of the position. Here's what we said:

Is Nick Foles a franchise QB? After cautious optimism following Foles' stellar 2013 season, he did not play well in 2014. As long as you don't think you have a top 10-12 type of QB in the NFL, you should always be searching for someone who can be. Foles will be on the roster in 2015, as he's in the final year of his rookie deal. He'll likely be given the opportunity to compete for a starting job in training camp, but the Eagles need to find a way to give him legitimate competition.

As for the others, Mark Sanchez proved he's not a long-term answer, and is a free agent, while Matt Barkley has become something of an afterthought.

So... Now we'll take an initial look at what the Eagles can potentially do this offseason to improve the QB position:

Good quarterbacks almost never make it free agency in the NFL. If you're an NFL team looking for a starter in free agency, you're screwed. But, occasionally you can find a good backup, or an intriguing reclamation project. Last year of course the Eagles brought in Mark Sanchez, who kinda sorta did what you want a backup to do -- win some games. Sanchez was 4-4 as a starter, 5-4 if you give him credit for the Houston Texans game, when he took the majority of the snaps.

But clearly, Sanchez is not an ideal NFL starter who is likely not going to legitimately push Nick Foles in training camp. Sanchez himself will be a free agent this offseason, and his biggest advantage in getting some interest from the Eagles to return is that he will already have familiarity with the receiving corps and the playbook.

If the Eagles decide they want to go in another direction, an intriguing name could be the Titans' Jake Locker, who was the eighth overall pick in the 2011 draft. Locker has good size (6'3, 223) and is a very good athlete. Note the athletic measurables in the spider chart below, which shows how Locker compares to other QBs competing at the combine since 1999 (via mockdraftable.com): 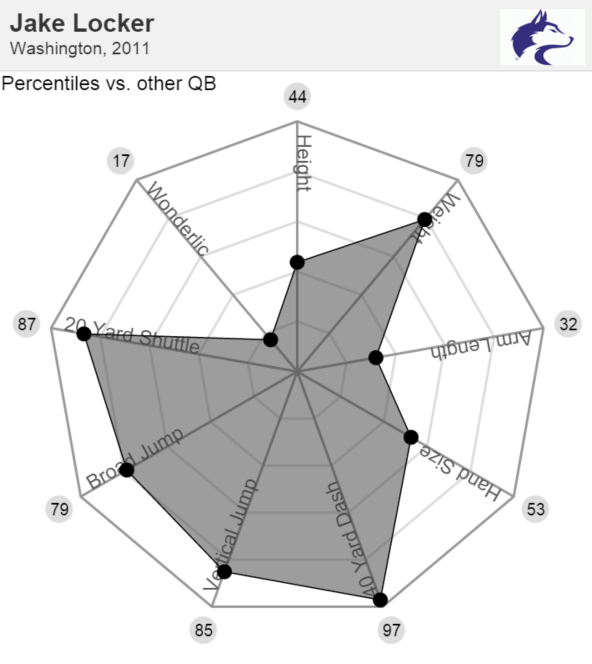 However, his professional career has not been good. After a promising rookie season, Locker had injuries derail his 2012 and 2013 seasons, and in 2014 he was benched in favor of sixth round rookie Zach Mettenberger.

And now for some severe over-analysis. Playing in the Pac-12 at Washington in college, Locker faced Oregon three times in his career while Chip Kelly was a coach with the Ducks! Oregon spanked Washington in all three games, and Locker's numbers weren't good:

So what does that mean? I don't know. But who cares? People like charts, and I'm going to provide them.

Anyway, Locker could perhaps be an athletic reclamation project of sorts for the Chippah.

Chip Kelly may not care all that much about Hundley's lack of experience taking snaps from under center, but the other two perceived negatives should be concerning. Can they work with Hundley through the mental side of the game? If so, his physical attributes are excellent. If the Eagles had interest, they'd probably have to get Hundley in the first round.

Petty has good size, good mobility, and a decent enough arm to be considered a legitimate early round quarterback prospect at the NFL level. Like Brett Hundley above, one thing that will scare away some teams is that he operated mainly out of the shotgun in a spread offense for the entirety of his career at Baylor. But again, that may not be as much of a negative in the eyes of Chip Kelly, who uses many of the same spread concepts as Baylor.

Over his college career, Petty has thrown 61 TDs and just 10 INTs. Those numbers have to look appealing to a team that led the NFL in turnovers in 2014.

Grayson was the Mountain West Offensive Player of the Year, and his numbers were excellent. He was fifth in the nation with a QB rating of 166.2, as well as second in yards per pass attempt, at 9.5. Mariota was first in both categories, just FYI. Grayson could be a potential mid-round pick.

Here's a sleeper for you. Bridge had just a 50.7% completion percentage for his career, although most of it was in 2014. But… He’s big, has a strong arm, and 25 different NFL scouts have checked him out this year. He is an intriguing late round developmental prospect.