More than $600K raised for family of Bucks County father, sons who died in Christmas fire

Eric King, 41, and two of his sons died Saturday morning in a blaze investigators have linked to lights on a tree display 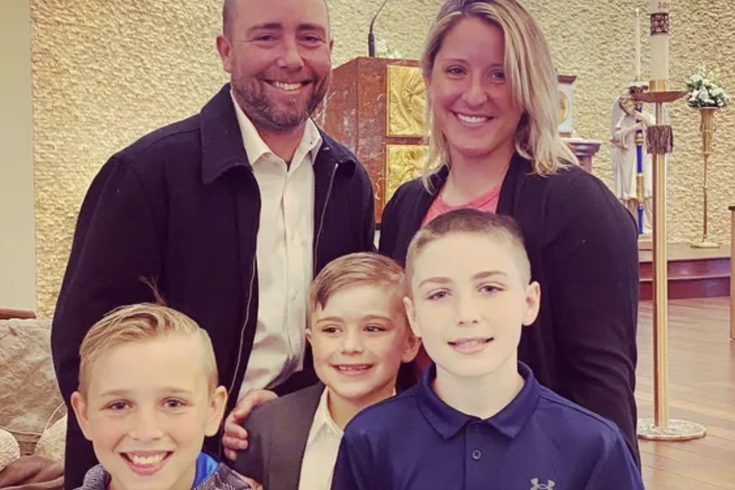 Eric King, 41, and two of his sons, 11-year-old Liam and 8-year-old Patrick, died in a tragic house fire in Quakertown on Christmas morning. King's wife, Kristin, and his oldest son, Brady, survived the fire.

The Quakertown community is mourning the loss of a father and two sons who died in a Christmas fire that investigators believe may have been caused by the lights on their tree display.

Eric King, 41, and his sons Liam and Patrick, 11 and 8, died early Saturday morning when flames broke out at their home along the first block of Essex Court. Two dogs also were killed in the fire. King's wife, Kristin, and his eldest son, Brady, 13, escaped from the home and were treated at a local hospital.

Another home sustained significant damage in the fire, but a mother, her adult son and their dog were able to get out without serious injuries.

In the days since the holiday tragedy, more than 9,000 people have donated nearly $607,000 to support the surviving King family members. The family friend who set up the crowdfunding campaign cut off further donations due to scam GoFundMe accounts that were attempting to siphon away support, but another page has been created to make gift card donations to the family.

"Eric and Kristin were high school sweethearts and the happiest people you will have ever met," Kristin Randazzo wrote. "They were always smiling and full of positive spirits, you just couldn't help but to love them. The three boys, Eric and Kristin were all a huge part of the Quakertown Youth Baseball Association and spent their days and nights at the baseball fields. The Quakertown community will be deeply impacted by this great loss."

Liam and Patrick were students at Richland Elementary School in Quakertown, where the school district shared its sorrow over the family and community's loss.

"This news is devastating to the school district community and the Quakertown area at large," Superintendent Bill Harner wrote in a message to the community. "Eric and Kristin and their boys are very active in our community. The School District sends its heartfelt sympathy to the King family and their many friends and relatives."

Support will be available for grieving students, parents and staff over the coming days

Evidence in the fire investigation continues to point to the lights on a Christmas tree that was placed on the center of a front window in the family's living room, according to Quakertown Police Chief Scott McElree.

Emergency personnel attempted to enter the home to rescue King and his sons, but were unable get past the flames.

"A Christmas tree burns very quickly and very hot," McElree told the Bucks County Courier Times. "When trees go dry, it's a violent and robust source. There is an immense amount of heat and that probably contributed."

A second GoFundMe campaign to support the neighboring family, whose home is now uninhabitable, also has raised nearly $30,000.

A final determination on the cause of Saturday's fire will be made in conjunction with county and state fire marshal offices.