The Flyers mascot got wind of the missing holiday ornament, made in his honor, and sprung into action 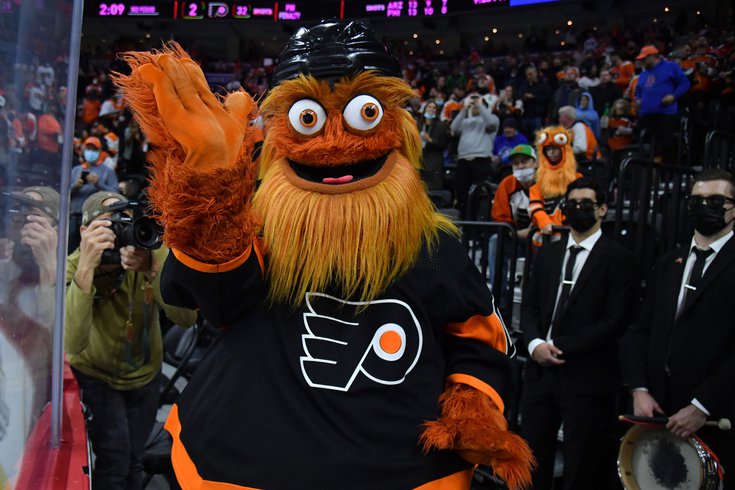 Gritty played the role of Santa Claus when he delivered a 6-foot, Flyers-themed holiday wreath to a South Philly couple who had their original decoration stolen earlier this month.

Gritty may have saved Christmas for a South Philadelphia couple who had their holiday wreath snatched off their front door earlier this month.

The new, 6-foot wreath is orange and black and features the mascot's googly eyes and tongue.

Gritty originally had planned to present Jackson and Popp with the wreath at the Flyers-Capitals game last Tuesday, according to ESPN. However, the game was canceled due to COVID-19 issues, and the couple instead invited Gritty to visit their home.

When Jackson and Popp opened the door Wednesday, they were greeted by Gritty wearing a Santa hat on top of his hockey helmet and donning Santa's white beard over his orange fur.

After exchanging hugs and high-fives, the couple gave Gritty the homemade ornament of the mascot that inspired their original wreath, as well as a card and flowers. Gritty gave them an autographed picture of himself.

When Gritty arrived, the couple expected he would be delivering tickets to a future Flyers game. Instead, the mascot pulled out the enormous wreath that left Jackson and Popp stunned.

The case of the missing Gritty wreath began earlier this month when Jackson posted in a Facebook group that someone had stolen the decoration off of the couple's front door.

The original wreath was orange with big eyes and a Santa hat. It hung outside for about a week before it was swiped. The couple then made a replacement wreath.

But the stolen decoration elicited a not-so-subtle threat from Gritty on Twitter.

"If you don’t return the wreath, I will look for you, I will find you and I will cake you," the Flyers mascot wrote.

If you don’t return the wreath,
I will look for you,
I will find you,
And I will cake you. pic.twitter.com/ZiaXkjXLtO

The original wreath has not been found, but the new decoration now hangs from the exterior of the couple's home. All thanks to Gritty himself spreading some Christmas cheer this holiday season.

"Our original wreath is probably gone forever, but the wonderful and weird story of our little Gritty wreath will be one that lasts a lifetime," Popp said in a video posted to social media. "Happy holidays everyone. May your days be Gritty and bright!"