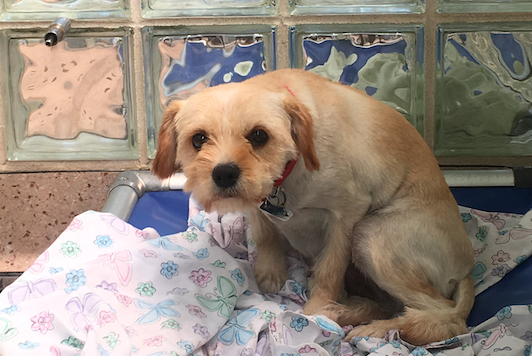 Rosie was among at least three dogs the suspect allegedly debarked in Lancaster County.

The Pennsylvania SPCA is searching for an Iowa woman who allegedly debarked multiple dogs in Lancaster County earlier this year.

Humane officers said three dogs were discovered in May at the home of an unlicensed breeder in Quarryville, where 15 dogs were rescued over concerns that an adult female husky had been debarked.

The painful procedure involves the devocalization of dogs by invasively damaging their laryngeal tissue, often by jamming an object down their throats.

In October, the unlicensed breeder pointed investigators toward Denise Felling, a woman who previously held a veterinary license in Iowa. That license was revoked and Felling had failed to obtain one in Pennsylvania.

Humane officials said at least three dogs were debarked in Lancaster County in January prior to the passage of Libre's Law, a new measure designed to toughen penalties for animal cruelty and abuse.

Felling allegedly performed the debarking procedure by shoving a rod-like object down the dogs' throats multiple times in barns and outbuildings on Lancaster farms.

“The idea that a woman who was formerly entrusted by the state of Iowa to provide medical care and treatment of animals would turn her back on that to torture dogs in this way is disheartening to say the least,” said Nicole Wilson, PSPCA director of humane law enforcement. “We intend to get justice for these dogs who were victims of such horrific cruelty and ensure that not one more dog is subjected to such a procedure.”

Anyone with information about this case is urged to call the PSPCA’s Cruelty Hotline at 866-601-SPCA.