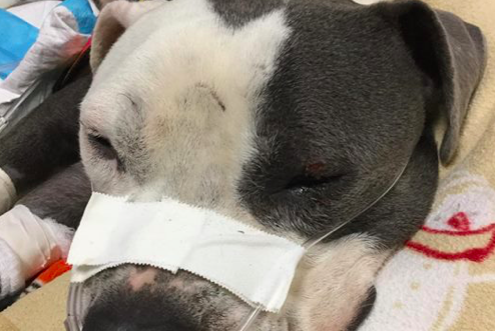 Bear is one of two dogs found in an abandoned property in Norristown. Peanut, who was also in the basement, did not survive.

One dog is dead and a second is fighting for its life after the pair were found abandoned and emaciated in the basement of a Norristown property last weekend.

The dogs, named Peanut and Bear, were heard underfoot by construction workers renovating a property in the 200 block of Franklin Street on Sunday morning.

Charlie's Crusaders Pet Rescue, a non-profit volunteer organization that serves Southeastern Pennsylvania, was notified of the two dogs and reported to the scene to find they had been left in shocking conditions.

Peanut, a female, died after going into cardiac arrest once she had been transferred to an emergency clinic. Bear remains in critical condition stemming from respiratory problems and malnourishment.

“We are devastated we lost Peanut and our hearts are broken,” Charlie's Crusaders wrote.

"Our boy is fighting and we will do everything in our power to make sure he survives," the rescue said.

There was no immediate indication of who left the dogs in the basement and how long they had been there. The case remains under investigation.

Those who wish to make a donation to support Bear's recovery and Charlie's Crusaders can do so here.