In the interview, which can be streamed on HBO Max and Discovery+, the pair discuss the success of 'Abbott Elementary' and Brunson's rise to fame 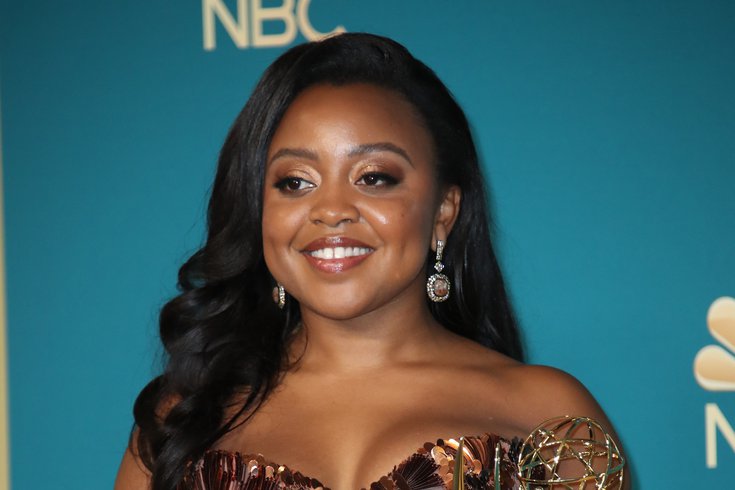 "Abbott Elementary" creator Quinta Brunson sat down with Oprah Winfrey for an interview discussing her meteoric rise to fame, her hit show and the journey that led her on the path to stardom.

Emmy winner Quinta Brunson sat down with Oprah Winfrey to open up about her meteoric success over the past two years, as well as her childhood, mentors and pivotal career moments.

Oprah's interview with the Philadelphia native, who rose to fame as creator, producer and star of "Abbott Elementary," aired Saturday on OWN, and can now be streamed on HBO Max and Discovery+.

Here are some of the biggest takeaways from the conversation:

Brunson's inspiration comes from her family

Born in Philadelphia, she was named "Quinta" because she was the youngest of five children. Brunson remembers living in a multigenerational household, with family members of many different ages and education levels, and laughing together watching sitcoms, the glue that held everyone together. She even found ways to connect with her oldest brother, who was in prison, by writing letters about what they were watching on television. For Brunson, her family is still her most important audience.

"I think performing and writing and creating, producing; I feel like I'm still always just doing it for my family," Brunson said. "They're the best focus group because growing up we always found ways to laugh together."

Part of the intention behind creating "Abbott Elementary" was bridging the humor gap between generations. Brunson hoped to create something that would make herself, her young nephew and her 95-year-old grandfather (who sadly passed away) all laugh together.

The direct inspiration for the show's setting in a Philadelphia public school comes from Brunson's mother, who was a kindergarten teacher for many years. Brunson recalls a time when she was pushing her mother to retire from teaching, and her mother, who did not yet see the vision for Brunson's entertainment career, was urging her to move from Los Angeles back to Philly.

One night while Brunson was visiting her mother at work, she became frustrated that her mom had to stay late during an open house because a student's parent didn't show up until 7:58 p.m. It turned out that the mom was working as a nurse and came by as soon as she got off work. Listening to her mother and the student's mother talking, the idea for "Abbott Elementary" began to fully form. There is even a scene in the first season of the show based on that exact moment.

"Wow, this is such a rich world that I was a part of that I'm not anymore, but it's still just as rich and warm and I see this with an outside view," Brunson recalls thinking while visiting her mother's school.

She doesn't believe in failure

One thing Oprah and Brunson have in common is that they really got their starts at the same age: 32. Brunson notes that she has always looked up to Oprah as inspiration and proof that it would be possible for her to succeed in entertainment, even taking an internship at a local news station.

"My rising started at exactly the same time, at the same age at 32, and I know that when it comes this way it means you are fully ready to receive it," Oprah told Brunson during the interview.

Brunson grew up dancing and loving to perform, and in 2014 she self-produced her own Instagram series, called "The Girl Who's Never Been on a Nice Date." She went viral through memes and the catchphrase: "He got money." She then went on to become a BuzzFeed showrunner, producing and starring in multiple series. Brunson's breakout role came in 2019 in HBO's "Black Lady Sketch Show."

Now, she is the creator, executive producer, head writer and star of the hit show "Abbott Elementary," with its first season premiering last year.

"Every single thing I've done has led to now," Brunson said. "I embrace all of it."

Brunson, who sold two shows before "Abbott Elementary," says she does not believe in failure.

"I don't believe in failure," Brunson said. "It's just day to day and ... even now it's preparing me for I know not what in the future. But I do believe it's important to know the direction you're going in at least."

Little details mean the most in "Abbott Elementary"

Brunson has always been observant, which she says helped "Abbott Elementary" become the soulful show that it is, and helps people connect to it.

"I think the little details are what make something unique or special, and that goes from the characters in 'Abbott' to the set decoration in 'Abbott,'" Brunson said. "Making sure it really has that warmth of that kind of school goes down to a certain kind of dirt on the door."

The littlest details are taken into account to make the school feel real to viewers. For example, experienced teacher Barbara, played by Emmy-winning actress Sheryl Lee Ralph, does not wear a school lanyard because it's expected that everyone in the school already knows her name.

While Brunson acknowledges that winning her first Emmy award for Outstanding Writing for a Comedy Series is, "the manifestation of living your dreams," she also says that she's happy "Abbott Elementary" didn't win the overall Best Comedy award.

"I don't like a lot of expectations," Brunson said. "For the second season, I didn't want people to come into 'Abbott' ... expecting prestige. I think this season we're still just a toddler."

While the second season is already breaking records for ratings and viewership, Brunson notes that the team is still hoping for room to grow, experimenting and figuring out its voice.

"I love to be the underdog," Brunson said. "I've always operated well in that space."

She has kept her marriage private to protect it

Amidst her rise to fame, Brunson has managed to keep private her marriage to sales manager Kevin Jay Anik, whom she married in September 2021. As Oprah notes, many people did not even know Brunson was married until her Emmys acceptance speech.

"I had to protect that," Brunson said. "So much of my life is public, and only becoming more public, that the things that really matter to me have to be kept protected."

Brunson shares that her husband has always supported her successful career. The space he's given her to fully be herself, she says, is something that's helped her bloom, especially given previous boyfriends who tried to dim her light.

"We shall not be dimmed!" cheered Oprah.

Don't dim your light for anyone! Thank you for tuning in for #OWNSpotlight, West Coast! pic.twitter.com/VJ1y3VM5Ql

Brunson believes God can be found in people

Brunson was raised Jehovah's Witness, but is no longer in that religion. Instead, she tells Oprah she identifies as agnostic, and finds God in the people around her.

"I believe in people," Brunson said. "I believe God is in people, and when someone does an act of kindness, or when people work together, and make something amazing happen ... Everyday people just trying their best is so moving to me."

Much of the ethos behind "Abbott," which shows the daily miracle of average people waking up, going to work and making a difference in others' lives, comes from this line of thinking, according to Brunson.

Oprah and Brunson also touched on a unique connection between the pair – Brunson played Oprah in Roku's "WEIRD: The Al Yankovic Story," a parody biopic starring Daniel Radcliffe as the comedy singer.

"Didn't you play me recently?" Oprah joked, noting that she has not yet seen the film.

When Brunson was first approached to play Oprah in the movie, she says she did not think she was the right person for the job until she saw the script.

"I was handed the script and it was the exact way for me to play you," Brunson said. "It's a very silly, fun movie."

Brunson notes that she is not doing an exact impression of Oprah, but rather attempted to capture the iconic interviewer's essence. While this film was a comedy, Brunson said she hopes whoever is approached to play Oprah in a more serious role is "really, really, really good."

"I am so nervous for you to see it, but I hope you like it," Brunson said.

Capturing the essence of Oprah is no easy feat, but we have no doubt that Quinta did her justice! Tune in tonight for a special #OWNSpotlight with @oprah and Quinta Brunson at 9|8c on OWNtv. pic.twitter.com/WJvczYt60Z

To finish out the interview, Oprah congratulated Brunson on her meteoric success.

"I am exceedingly proud of who you are and who you continue to become," Oprah said. "We are all just watching the rising."

To which Brunson expressed her sheer disbelief: