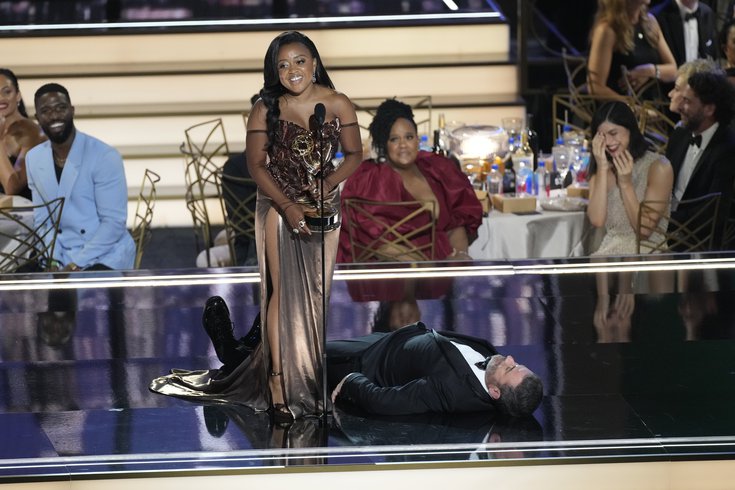 Quinta Brunson received an on-air apology from late night host Jimmy Kimmel on Wednesday over a bit in which he pretended to be passed out drunk on stage as she accepted an Emmy award for her show 'Abbott Elementary.'

Quinta Brunson received an on-air apology from Jimmy Kimmel on Wednesday night after the late night host was widely criticized for a bit in which he pretended to be passed out drunk on stage as she accepted her Emmy award earlier this week.

The creator and star of ABC's "Abbott Elementary" interrupted Kimmel's opening monologue with her trophy in hand as a form of lighthearted payback. Then she got a chance to make a more extended acceptance speech.

"You know, you're a little bit early for your interview," Kimmel said.
"I know, but I have a little favor to ask, actually," Brunson said. "So you know how you win an Emmy, you only have 45 seconds to do an acceptance speech, which is not that much time? And then you get less time because someone does a dumb comedy bit that goes on a bit too long?"

She went on to thank her show's fans and acknowledged her fellow writers, telling them to go to bed since they had to work in the morning.

Brunson received the Emmy for outstanding writing for a comedy series for her work on the "Abbott Elementary" pilot. She also plays protagonist Janine Teagues, an optimistic second grade teacher at a school in Philadelphia.

Kimmel, who was accused of being rude and embodying white privilege by many on social media, addressed the controversy in a more serious manner when he and Brunson sat down for an interview after the commercial break.

"That was a dumb comedy bit that we thought would be funny," he said. "People got upset. They said that I stole your moment, and maybe I did. I'm very sorry if I did do that — I'm sorry I did do that, actually."

Kimmel added that "The last thing I would ever want to do is upset you because I think so much of you."

Brunson thanked him for apologizing and noted that Kimmel was one the earliest and most vocal supporters of "Abbott Elementary" at ABC.

"Jimmy gave me my first big late night spot and was one of the first people to see Abbott," she said after the award ceremony Monday night. "He Instagram messaged me that he saw this comedy and thought it was one of the greatest comedies of all time."

At the time, Brunson said she wasn't particularly upset about the joke.

"Tomorrow maybe I'll be mad at him," she said. "I'm going to be on his show on Wednesday, so I might punch him in the face. I don't know what happens."

She was not the only "Abbott Elementary" star with ties to Philadelphia to take home an Emmy this year.

Sheryl Lee Ralph won the award for best supporting comedy actress. After more than 40 years in the industry, this was Ralph's first Emmy.

The actress, who is married to Pennsylvania Sen. Vincent Hughes, began her speech by singing "Endangered Species" by Dianne Reeves, a song about being strong and staying true to yourself.

Brunson and Ralph were the second Black women in Emmy history to win their respective awards. Lena Waithe won an Emmy for outstanding comedy writing alongside Aziz Ansari for their work on Netflix's "Master of None" in 2017. Jackée Harry won the Emmy for outstanding supporting actress in a comedy series for her role in 1987's "227."