The 5.0% ABV wheat ale has hints of pomegranate juice and cherry; It will only be available at the company's tasting room 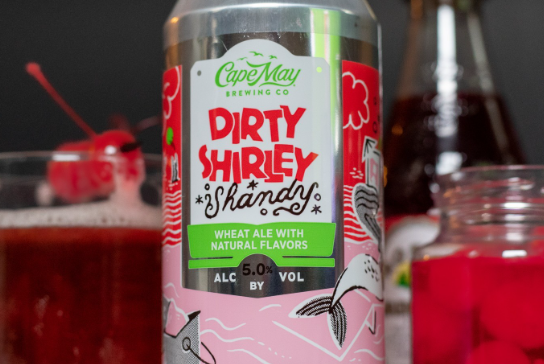 Cape May Brewing Co. is releasing the Dirty Shirley Shandy, a 5.0% ABV wheat ale with hints of pomegranate juice and cherry. The brew was inspired by the Dirty Shirley cocktail, an alcoholic version of the Shirley Temple.

Imbibers can soon enjoy one last taste of summer thanks to a South Jersey brewery's new beer that took inspiration from an alcoholic version of a favorite childhood drink.

Cape May Brewing Co. is releasing the Dirty Shirley Shandy, a 5.0% ABV wheat ale with hints of pomegranate juice and cherry. The beer will only be available at the brewery's tasting room in Rio Grande at 1250 Hornet Rd. starting Friday, Sept. 16 at 11 a.m.

Due to New Jersey laws, alcoholic beverages cannot be shipped. People looking to grab a pack can preorder one on the company's website for pickup this weekend. Packs must be picked up before Sunday, Sept. 18 at 7 p.m. The tasting room also will have the brew on tap.

The nostalgic beer is inspired by the Dirty Shirley cocktail, a grown-up version of the non-alcoholic Shirley Temple. The drink – not associated with the actress – is traditionally made with ginger ale, lemon or lime juice, grenadine and maraschino cherries. Dirty Shirleys are made with vodka and exploded in popularity in recent months, leading the New York Times to hypothesize that the bright red cocktails were the drink of summer 2022.

Cape May Brewing is playing off the new demand as it previously has with the Crushin' It IPA, which was inspired by the popular Orange Crush cocktail.

Social media exploded with excitement on Monday following the announcement of Dirty Shirley Shandy. The brewery's posts garnered over 4,000 likes on Instagram and over a thousand likes and comments on Facebook.

Preorders for the release are currently live and with only one batch in existence, Cape May Brewing encourages interested customers to claim a four-pack before they're gone.

Dirty Shirley Shandy is part of a double release, which features the return of Devil's Reach, a fruity Belgian-style ale with an 8.6% ABV. Six packs are available for preorder for $13.99.

Those who are interested in leaving summer behind in favor of fall can check out Cape May Brewing's Oktoberfest or Apple Bomb, which are both available now.

Earlier this summer, Cape May Brewing became embroiled in legal drama when a rival brewer sued the company for trademark infringement over its "Shore Tea" collaboration with Wawa. Jeff Plate, co-founder and former owner of Asbury Park Brewery, claims he developed and unsuccessfully pitched the hard tea concept to Cape May Brewing and it subsequently stole it. The brewery released a statement calling Plate's claims "groundless."