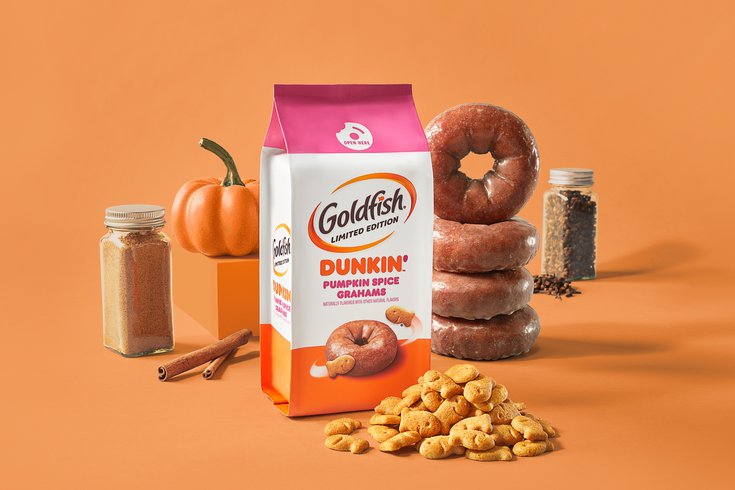 Dunkin' and Pepperidge Farm's Goldfish brand have teamed up to create limited-edition Pumpkin Spice Graham crackers. The fish-shaped snack has flavors of a pumpkin spiced donut with notes of a sugary glaze.

An unlikely collaboration between a coffee company and a snack brand is adding to the saturation of pumpkin spiced products on the market this fall season.

Dunkin' is partnering with Goldfish to create limited-edition Pumpkin Spice Grahams, available for the suggested retail price of $3.39 per 6.6 oz bag wherever the popular childhood snack is sold – including several Targets in the region.

MORE: Pumpkin spice craze: A guide to some of the most unique products coming this fall

The fish-shaped treat is reminiscent of a Dunkin' pumpkin spiced donut with notes of a sugary glaze. The "spice" portion of its name comes from warm hints of cinnamon, cloves and nutmeg.

A post shared by The official Goldfish® brand (@goldfishsmiles)

This is the latest in a line of collaborations between Goldfish and other brands that has included Frank's RedHot Crackers, OLD BAY Seasoned crackers and Jalapeno Popper flavored crackers.

"The new limited-edition Goldfish Dunkin' Pumpkin Spice Graham crackers bring together two fun and iconic brands to give pumpkin spice lovers a new way to experience the sweet side of their favorite snack," Janda Lukin, chief marketing officer of Campbell Snacks, said. "This is the first time Goldfish is tapping into the pumpkin spice season and we couldn't be more excited to partner with the brand that knows pumpkin spice the best."

Goldfish are a product of Pepperidge Farm, which has been part of the Campbell Soup Company since 1961. The company has a headquarters in Camden.

While it's unexpected for a cheese snack brand and a coffee brand to team up, it's not surprising that Dunkin' would lend its talents in the pumpkin spice department. The brand's beloved fall flavors recently returned in the form of Pumpkin Cream Cold Brew, Pumpkin Spice Signature Latte, Nutty Pumpkin Coffee and the pumpkin bakery line-up.

"Together with Goldfish, we're bringing fans a new snack to reach for during one of the most popular seasons of the year: pumpkin spice season," Brian Gilbert, vice president of retail business development at Dunkin', said. "Pumpkin Spice Grahams embody everything we love about this special time, from the warm pumpkin spices you find in our delicious latte or notes of our classic donut glaze in our baked goods. We're confident this will be a real treat for all the pumpkin spice aficionados out there."

The pairing of pumpkin spice and usually-cheesy cracker always had viral social media potential, and Goldfish capitalized on it with a campaign featuring photos of a donut with a fish-shaped hole, a video referencing the trendy BeReal app that hinted at meetings with Dunkin', and even a reimagining of Taylor Swift's album announcement.

A post shared by The official Goldfish® brand (@goldfishsmiles)

The brand riffed on Pennsylvania-native Swift's internet-breaking social media announcement of her upcoming 10th studio album, "Midnights." Swift originally gave a surprise announcement of the album during her VMA "Video of the Year" award acceptance speech. She then took to Instagram to explain the concept to fans and asked them to meet her at midnight. The snack brand instead asked hungry customers to meet them in the "Goldfish aisle" for the "perfect snack."

As expected, the internet chimed in with thoughts and reviews of the snack once it was officially released on Sept. 1. Surprisingly (or not if you're a pumpkin spice fan), the tweets were mostly positive.

Those pumpkin spice Dunkin Donuts Goldfish graham crackers are delicious, just FYI even though that string of words together sounds disgusting

The Dunkin' Pumpkin Spice Goldfish are so good it hurts my feelings.

Pumpkin Spice Grahams join a host of other surprising pumpkin spice products this fall, such as Cup Noodles and Oreos.