The Berks County native says 'Midnights' will be released on Oct. 21 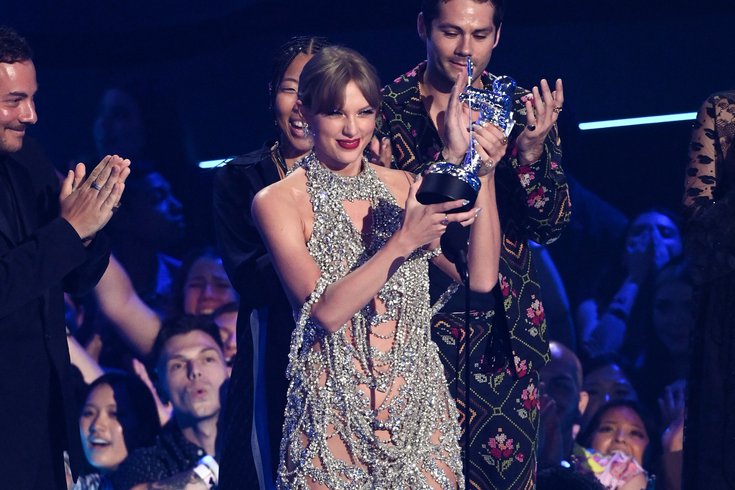 Taylor Swift, amidst a record-breaking night at the MTV Video Music Awards, revealed she will release a new album on Oct. 21, titled 'Midnights.' It will be her 10th studio album.

Taylor Swift has once again proven why her fans should never sleep, lest they miss earth-shattering news – by "Swiftie" standards.

During the final moments of the 38th MTV Video Music Awards in Newark, New Jersey, on Sunday, Swift accepted the biggest award of the night – Video of the Year – and used her acceptance speech to make a highly anticipated anticipated announcement: Her 10th studio album will be released Oct. 21. Later, on social media, she said the title of the album will be "Midnights."

"I had sort of made up my mind that, if you were going to be this generous and give us this, I thought it might be a fun moment to tell you that my brand new album comes out Oct. 21. And I will tell you more at midnight ..." Swift, who is from Berks County, said to an uproar of applause from the VMA audience.

Swift's Video of the Year award honored her self-directed, short film for "All Too Well (10 Minute Version) (Taylor's Version)," starring Dylan O'Brien and "Stranger Things" star Sadie Sink. This is Swift's third Video of the Year award – she previously won for "Bad Blood" featuring Kendrick Lamar in 2015 and "You Need to Calm Down" in 2019 – making her the first artist to win it three times.

"All Too Well" also won best long-form video and best direction. Swift's three wins made her the most honored artist of the night.

"All Too Well " was a track on Swift's re-release of her 2012 album "Red." She is in the midst of re-recording her catalogue of music, a project she started after Scooter Braun bought and sold the rights to the singer's master recordings. So far she has released "Fearless (Taylor's Version)" and "Red (Taylor's Version)."

Fans believed Swift's VMA appearance foreshadowed another re-recording, especially given her Oscar de la Renta VMA look. The dripping-in-jewels frock drew comparisons to a scene from her "Look What You Made Me Do" music video, causing speculation that Swift would reveal she would be re-recording 2017's "reputation."

IT IS HAPPENING #VMAs pic.twitter.com/164ixu1MI2

Also fueling that theory was that the 2022 VMAs marked 13 years since Kanye West infamously interrupted Swift as she accepted an award in 2009. Swift's lucky number, which she often incorporates into "Easter eggs" for fans, is 13. The "reputation" album addresses, allegedly, much of the drama between Swift, West and his then-wife Kim Kardashian.

no bc this is 13 years later … pic.twitter.com/jtxRUSj1Mt

Instead, Swift found a different way to incorporate her lucky number into her album announcement. At midnight, as promised, the singer posted to her social media accounts about "Midnights."

Midnights, the stories of 13 sleepless nights scattered throughout my life, will be out October 21. Meet me at midnight.

Swift wrote that "Midnights" is a "collection of music written in the middle of the night, a journey through terrors and sweet dreams," and will contain "the stories of 13 sleepless nights scattered throughout my life"

Naturally, the internet exploded with fans excited about the concept of the album.

taylor’s new album concept being the art of staying all night up overthinking your whole life.. yeah this album is about to hit very hard y’all 😭

taylor swift didn’t write “it’s 2 am feeling like i just lost a friend” and “lit through the darkness at 1:58” and “the lingering question kept me up, 2AM who do you love?” and “i want your midnights” for this to not become one of her greatest albums

"They don't know I'm about to announce my 10th studio album and ruin their peaceful night" pic.twitter.com/DjINilRXbR

This is not the first time Swift has surprised fans with an album announcement. In 2020, the star jump-scared fans with "folklore" and its companion album "evermore."

Swift is known for wholeheartedly entering "eras" with each of her new albums, and it seems she wasted no time entering her "Midnights" era.

The singer was spotted attending a VMA afterparty in what could be described as a midnight-blue Moschino romper bedazzled with stars.

If the record-breaking night and glamorous outfits are any indication of the excitement to come, then Swifties should sleep with one eye open so as not to miss another late-night announcement.