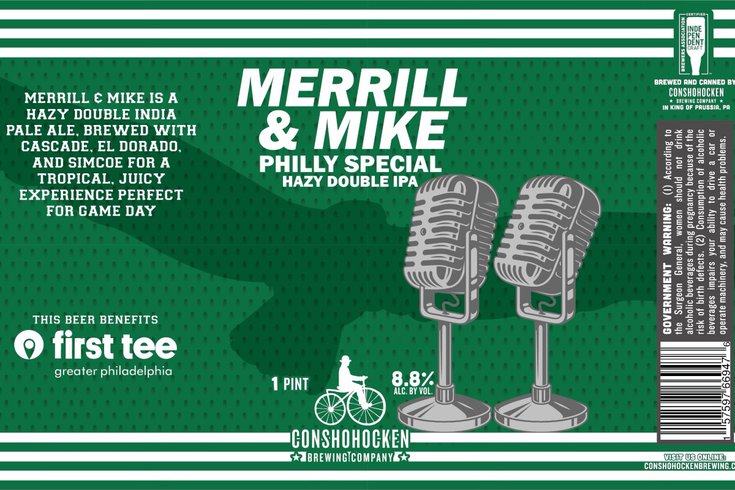 Conshohocken Brewing Co. is releasing a beer in honor of Philadelphia Eagles broadcasters Merrill Reese and Mike Quick. It is called Merrill and Mike and described as a 'Philly Special hazy double IPA.' Sales of the beer benefit First Tee Greater Philadelphia

Conshohocken Brewing Co. is gearing up for football season with a new beer that will assuredly appeal to Birds fans. The brewery is unveiling Merrill and Mike, a hazy double IPA in honor of the legendary Philadelphia Eagles radio broadcast duo Merrill Reese and Mike Quick.

Sales of the beer will benefit First Tee Greater Philadelphia, a charity that makes golf approachable and affordable for children throughout the Delaware Valley, who would not otherwise have easy access to the sport.

For the beer's launch, Conshohocken Brewing is having a release party on Wednesday, Sept. 14, at their Puddlers Kitchen and Tap location in Bridgeport, Montgomery County, at 6:00 p.m. Reese and Quick will be there, as well as other Philadelphia sports personalities. There will be a $20 food buffet in the taproom, as well as outside taps of the new brew to enjoy.

There will be an auction at the event, also benefiting First Tee. The items up for bid include Merrill Reese recording a voicemail message for you, a three-person golf outing with Mike Quick at Union League Liberty Hill Golf Club, an autographed Bernie Parent Flyers jersey, and Eagles tickets.

This is Reese and Quick's 25th season working Eagles broadcasts together. Reese has been the team's play-by-play announcer on radio since the start of the 1977 season, and he was inducted into the Eagles Hall of Fame in 2016. He signed a new contract in March that will keep him on the team's broadcasts through the 2024 season.

Quick was picked by the Eagles in the first round of the 1982 NFL draft, and played all nine seasons of his career with the team. He made five Pro Bowls and was a two-time All-Pro selection.