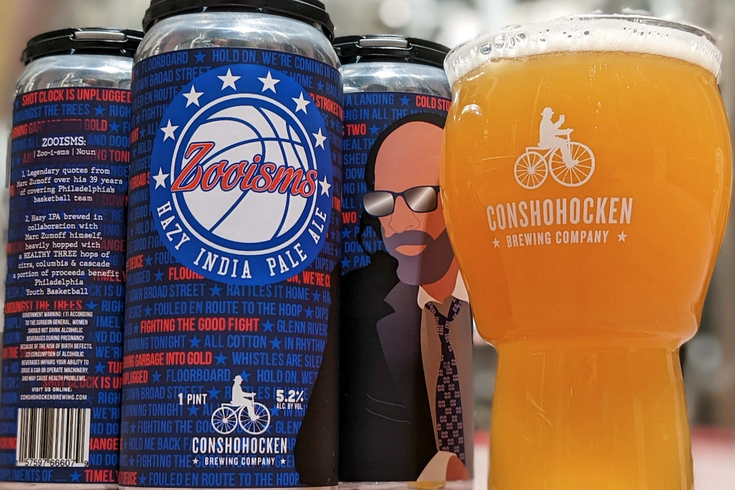 Conshohocken Brewing Company's Zooisms is a beer dedicated to Marc Zumoff's famous catchphrases from his 39-year-run covering the Sixers.

Marc Zumoff may no longer be calling Sixers games for NBC Sports Philadelphia, but the team's longtime play-by-play man can still keep fans company during games in the form of a refreshing beer.

Zumoff and Conshohocken Brewing Company have collaborated to release Zooisms, a hazy IPA beer that pays tribute to the broadcaster's iconic catchphrases.

The beer features a three-hop combo of Citra, Columbus and Cascade, and has an alcohol by volume percentage of 5.2%.

Decked out in Sixers blue and red, the Zooisms can sports a logo similar in design and color to that of the 76ers. The can also includes an artistic depiction of Zumoff.

The can also features some of Zumoff's most famous sayings, including "Turning garbage into gold," "Hold on, we're coming in for a landing" and "Shot clock is unplugged."

The back of the can defines a Zooism as a legendary quote from Zumoff's 39-year-run calling Sixers games.

COMING IN FOR A LANDING, it's Zooisms, a Hazy IPA collab with the legendary @marczumoff With a HEALTHY THREE hop combo, it's sure to have you saying WOWWW!!!
A portion of proceeds benefit @PhillyYouthBB
Available Friday at all CBCo locations and https://t.co/53DtfbG4R0 pic.twitter.com/grXREJ3H0q

Zooisms is available in cans and on tap at Conshohocken Brewing's locations in Conshohocken, Bridgeport, Phoenixville, Havertown and King of Prussia.

Cans are also available for purchase online. Shipments can only be made in Pennsylvania and orders must include at least two four-packs.

A portion of the proceeds will benefit Philly Youth Basketball, a nonprofit organization that works to empower students and athletes through basketball.

"And DOWN it goes!!" https://t.co/mCSkkzzdps

Zumoff retired from broadcasting last year. He joined the 76ers broadcast team in 1982, serving as an in-studio host for pregame, halftime and postgame coverage. He started calling games for the team in 1994.

The Northeast Philly native is now the chairman at Maccabi Media and the associate director of the Claire Smith Center for Sports Media at his alma mater, Temple University.