Rachael Ray eats her own dog food, because, 'It's delish!'

A self-proclaimed 'equal opportunity eater,' Ray was in town this past weekend for Kathy Romano's HerStory luncheon 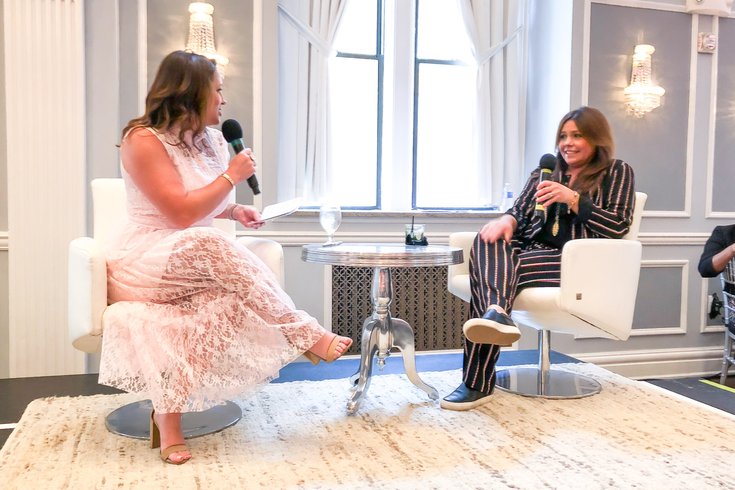 He gets a ton of great press as it is, but Philly’s James Beard Award-winning favored son Michael Solomonov can add another name to his list of fans – that of celebrity chef, TV personality, author and businesswoman Rachael Ray.

“Zahav is my favorite restaurant in the country – easily,” she said.

“Michael Solomonov is one of my favorite chefs on the planet and Zahav is my favorite restaurant.”

Ray paid a visit to Philly over the weekend to serve as the keynote speaker for 95.7 BenFm’s HerStory luncheon, hosted by Kathy Romano and held at the Arts Ballroom Saturday in Center City. The second annual event of its kind, the HerStory luncheon highlights local women who make a significant impact in their fields.

But after opening remarks, the regular schedule of speakers and award presentations, Ray had already downed a couple cocktails. Romano barely got through her prepared questions for the daytime talk show host before Ray laughed at herself and admitted to being a chatterbox.

“I’ve never cooked a 30-minute meal after a glass of wine in my life,” she joked.

An almost all-female crowd came to hear Ray speak. Donning Vans and a business suit, she told stories from her childhood. Having grown up in a blue-collar Italian family from New York, her first word was “vino.”

“No one teaches you to cook in an Italian family. The living room is for strangers. Everyone is in the kitchen,” she said.

Ray – who will turn 50 in August – said that from an early age, members of her family learned how to feed themselves with what was in the cupboard. She was peeling potatoes when she had pigtails and knew how to make a scrambled egg simply by watching her mother work.

But one of the funniest bits Ray divulged over the course of an hour was that she has sampled her own pet food, Nutrish, made for dogs and cats and from all-natural ingredients. She said she and her husband have cooked for their dogs at home, and that she has eaten the food before.

"It needs a little salt, but that's me," she laughed.

She also shared some life lessons, like when her grandfather would tickle her when she was a young girl – he would tickle her incessantly until she was frazzled and in tears. She said when he finally stopped, he would say to her, “There is no such thing as feeling sorry for yourself unless you have a very good reason for feeling sorry for yourself.”

Her show, “Rachael Ray,” is going into its 13th season, and when asked what’s given it staying power, Ray said she hoped it inspires people to cook something different.

When Ray rose to fame in the early 2000s, she said she hated the sound of her voice and she never imagined herself on television.

“I never wanted to be on television. I hate being on TV. I can’t stand the sound of my voice. My dog freaks out!”

As for her preference on Philly cheesesteaks?

“Geno [Vento] comes on our show all the time, so, it better be Geno’s,” she laughed.

“Listen, I’m an equal opportunity eater when it comes to pretty much anything, including Philly steaks.”