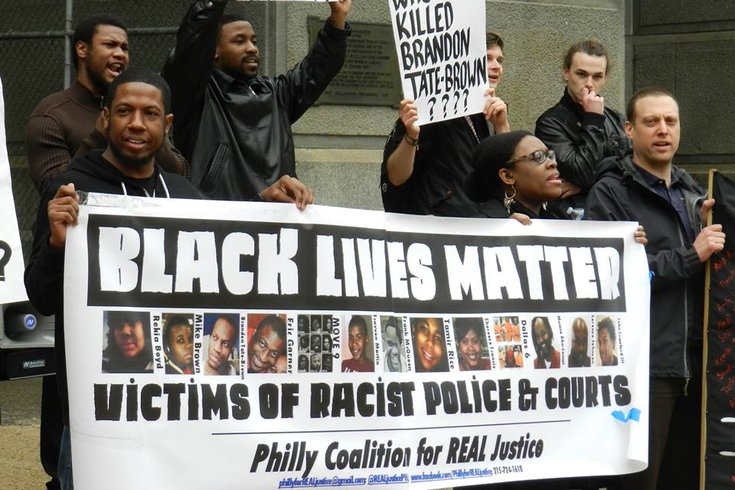 The Philadelphia Coalition for Racial, Economic and Legal Justice, shown here at a previous demonstration, is organizing a rally Thursday to highlight similarities between Philadelphia and Baltimore, where riots broke out Monday.

More than 1,000 demonstrators are expected to gather Thursday afternoon at City Hall for a rally highlighting the similarities between Philadelphia and Baltimore, where riots erupted this week following the funeral of a black man who died in police custody.

At least 1,025 people have committed to attend the “Philly Is Baltimore” rally being organized by the Philadelphia Coalition for Racial, Economic and Legal Justice, according to the group’s Facebook page.
RELATED STORY: Could Baltimore riots happen here?
The coalition instructs demonstrators to bring their voices, drums and signs to the 4:30 p.m. event.
"We definitely understand Baltimore and what they're doing out there as far as protesting," said Joelle Schofield, one of rally's organizers. "We understand that people are poor. We understand that there have been long years of oppression on black people. We understand why there are riots."
Schofield stressed that Thursday's rally is intended to be peaceful. But it's also intended to send a message that police brutality and the targeting of poor black people by police will not be tolerated.
"It's an outcry," Schofield said. "We're done and we're tired of it. We need to stand together in unity. We need to galvanize people around it. We need to get people to understand that this is something that is not going away."
Riots broke out Monday in Baltimore following the funeral of Freddie Gray, a 25-year-old black man who died of a spinal injury suffered while in police custody earlier this month. More than 250 people were arrested as rioters looted stores, threw bricks at police and torched buildings and vehicles.
On Tuesday, thousands of National Guard members were deployed to prevent additional civil unrest and enforce a weeklong curfew. Pennsylvania Gov. Tom Wolf sent 300 state troopers to assist the policing efforts on Wednesday. The Baltimore Orioles barred fans from its game Wednesday at Camden Yards and moved their weekend series against the Tampa Bay Rays in St. Petersburg, Florida.
Baltimore police announced Wednesday that they will not issue a report on the death of Gray, but instead will forward the department's findings to prosecutors.
Hundreds of Philadelphians have protested against police brutality and racism since police-involved killings of unarmed black men in Missouri and New York sparked a national dialogue about the issue. To date, those demonstrations have been peaceful.
The Coalition for REAL Justice also plans to march at 2 p.m. Friday from 40th and Walnut streets to Clark Park in West Philadelphia, according to its Facebook page. The march was planned before the Baltimore riots as part of the 'Black Lives Matter' demonstrations taking place the country.
Philadelphia police will patrol both the rally and march as they do any other demonstration, Public Information Officer Christine O’Brien said.
“We will be out tomorrow for the protest and for the march,” O’Brien said. “We’ll be out there to ensure that everyone is in a safe environment, whether it be for the protesters or bystanders.
“Everybody has the right to be out there," she said. "They have the right to walk and protest and say their piece. We want them to be safe in their environment.”
Thursday's rally will again protest the killing of Brandon Tate-Brown, who was fatally shot by Philadelphia police in December after being stopped for a traffic violation. District Attorney Seth Williams cleared the two officers involved of any wrongdoing in March.
Police said Tate-Brown, 26, reached for a loaded gun during the traffic stop. His mother, Tanya Brown-Dickerson, claims her son was unarmed. She has urged police to publicly release the officers’ identities and video surveillance.
"To go from a traffic stop to being shot, how does it escalate?" Schofield asked. "How could it get there? Race is definitely an issue."
Brown-Dickerson filed a class-action lawsuit Tuesday, seeking to force the Philadelphia Police Department to enact a series of recommendations outlined in a U.S. Department of Justice report released in March.
That report found Philadelphia police regularly shot civilians, employed undertrained officers and lacked a transparent review process for police-involved shootings.