Random thoughts on the Titans, everyone's favorite 'trade back' team 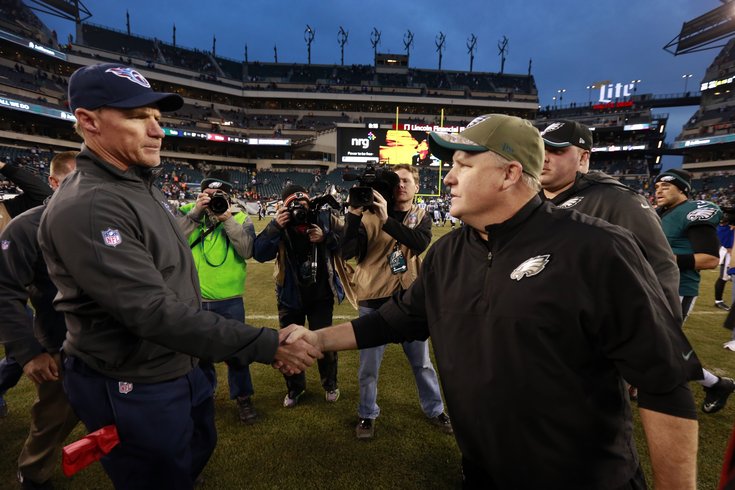 "Marcus Mariota isn't the droid you're looking for."

We're now only 12 days away from the NFL Draft, and the smoke is thick. The spot in the draft order most commonly linked to Marcus Mariota is at #2, although it's not necessarily to the team that currently occupies that spot, the Tennessee Titans. The Titans are the team most heavily rumored to trade back in the first round, so below are some random thoughts on the Titans and their head coach, Ken Whisenhunt.

1) The Titans' rumored interest in Philip Rivers begins to make more sense when you drill down a bit.

A few days ago, reacting to the rumors that the Chargers could try to make a move up to #2 to draft Marcus Mariota, I pointed out that the Titans don't make much sense as a landing spot for a 33 year old QB like Philip Rivers:

Rivers for Mariota is an interesting scenario, and one that makes sense for the Chargers, but I don't see how it makes much sense for the Titans.

The Titans might be the worst team in the NFL. They have nothing. Seriously... Without looking up their roster, name five Titans. Is a team with nothing going to build around a 33 year old QB? By the time they get enough good players around him, there's a pretty good chance Rivers will begin to decline. The only way this makes any sense at all to the Titans is if the coaching staff and front office are content to improve their win total by showing improved (although empty) short term results to prolong the lifespan of their jobs. But this isn't how you win a Super Bowl.

After giving it more thought, Titans head coach Ken Whisenhunt may not see it that way, given historical precedent.

The 33-year-old Rivers, in Ken Whisenhunt's mind, may seem like a spring chicken in comparison to Warner. And oh, by the way, he was Rivers' offensive coordinator in 2013, when Rivers had the following numbers:

When you look at a terrible team like the Titans having interest in a 33-year old, it's not as crazy as it might seem, considering the head coach in place.

In 2011, Whisenhunt's Cardinals were picking 5th overall. They had just come off a season in which Derek Anderson, John Skelton and Max Hall started games for them at QB. And so, many draft analysts were connecting them with Cam Newton and Blaine Gabbert. Whisenhunt was honest in his assessment of that QB class, via Gregg Rosenthal, who at the time was with ProFootballTalk.

“There are a lot of guys that are intriguing athletically like Blaine Gabbert, like Cam Newton, because of the skill set, some of the things they can do. But I don’t think they have shown the ability to do some of the things that you have seen in the past by some of these guys like a Matt Ryan or, obviously, like a Sam Bradford.”

That quote was from four years ago, so Whisenhunt's opinion of Bradford may have since changed, but it is interesting nevertheless.

Since Whisenhunt rose to the level of an offensive coordinator in the NFL in 2004 with the Steelers, he has worked almost exclusively with pocket passers. Here are the QBs his teams went into the season with at QB every year since 2004:

The only quarterback above who is not considered a traditional pocket passer is Locker (unless you count "backpedaling away from the pocket" as a style of QB, in which case Kevin Kolb applies). Whisenhunt inherited Locker as his QB when he took over the Titans. He had previously passed on Locker when the Cardinals were picking 5th in the 2011 draft, and it only took him five games to bench him in 2014, eventually landing on a rookie pocket passer he drafted in 2014 in Zach Mettenberger.

The point of noting Whisenhunt's QB history? Mariota's body of work at Oregon doesn't offer many glimpses into what he might look like as a traditional pocket passer, which is all Whisenhunt has ever really known. His projection to the NFL in that regard is very difficult. Mariota isn't exactly a great fit in Tennessee, if Jameis Winston goes #1 to the Buccaneers as most people suspect.

It's interesting that everyone and their mother is suddenly "interested" in Mariota, from the Jets to the Bears, to the Rams, to the Browns, to the Chargers, and obviously the Eagles. It reeks of the Titans trying to create false interest in a player they aren't in love with, to try to maximize the value of the #2 overall pick.

That feels very unlikely. Would any team out there put together a huge package of picks/players to move up and draft, say, defensive lineman Leonard Williams? Williams is a great player, but no. By the same logic, if the Titans don't love Mariota, they would be similarly foolish to turn down a huge package of picks/players to stay at #2 and draft a guy like Williams. Therefore, it feels more and more like the mostly likely scenario to play out at pick #2 in the draft will be that the Titans will trade out. But with who?